With four major releases in 2017 ClusterControl is better than ever at supporting your MySQL, MariaDB, MongoDB & PostgreSQL environments.

2017 meant the introduction of ProxySQL, a lightweight yet complex protocol-aware proxy that sits between the MySQL clients and server. It also meant improved support for HAProxy and Keepalived and making sure that MySQL and MariaDB can fully utilize them.

From the introduction of the new ClusterControl CLI to dozens of improvements to our UI to the new system to integration with alarms and chatops, ClusterControl now makes it even easier to manage your database environments.

ClusterControl has always been the system to manage multiple technologies from a single console and have them work together seamlessly. 2017 meant adding support for the latest versions of MariaDB, MongoDB, MySQL, PostgreSQL, Percona Server, and Galera Cluster. 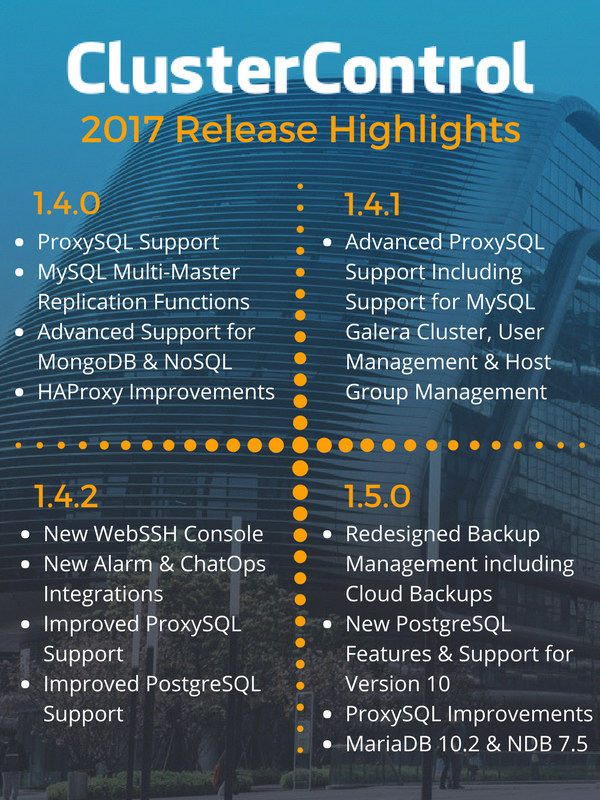 Announced in January 2017, ClusterControl version 1.4.0 brought several improvements for MySQL Replication and MongoDB. It was also the first version to introduce features for ProxySQL.

With the new version you are now able to deploy a multi-master replication setup in active – standby mode. One master will actively take writes, while the other one is ready to take over writes should the active master fail. From the UI, you can also easily add slaves under each master and reconfigure the topology by promoting new masters and failing over slaves.

Topology reconfigurations and master failovers are not always possible in case of replication problems, for instance errant transactions. In this version ClusterControl checks for issues before any failover or switchover happens. The admin can define whitelists and blacklists of which slaves to promote to master (and vice versa). This makes it easier for admins to customize failover automation in their replication setups.

Lastly, we added our initial support for ProxySQL allowing for its deployment onto MySQL Replication setups.

In this version you could now easily configure and manage your ProxySQL deployments with a comprehensive UI. You could create servers, reorientate your setup, create users, set rules, manage query routing, and enable variable configurations. It was now possible to view query analytics for all queries going through the proxy, and e.g. cache any frequent queries in just a click.

One of the main highlights in this release is the ClusterControl CLI, which allows users who prefer to manage their databases through the command line. All actions, such as deploying a cluster, using the CLI will be visible in the UI and vice versa.

Also included in this release is the new integration system for alarm notification and chatops systems. This new integration with popular incident management and chat services lets you customise the alarms and get alerted in the ops tools you are already using – e.g., Pagerduty, VictorOps, Telegram, Opsgenie and Slack.

This version introduced a new Backup Wizard with new support for AWS & Google Cloud backups, backup verification, Single Database backups and restores, and the ability to create and restore slaves from a backup rather than doing it from the master. Automatic restore testing was an awaited feature, as it is a time consuming task that is often neglected by database administrators.

PostgreSQL got a number of new features in this version including version 10 support, load balancing and virtual IP support with HAProxy and Keepalived, a new backup method, and support for synchronous replication failover.

The version also included support for MariaDB 10.2 and MySQL NDB Cluster 7.5.If any of these features appeal to you make sure to upgrade or download the latest version of ClusterControl to take advantage of them.

We look forward to providing you even more features to help you deploy, monitor, manage and scale your open source databases further in 2018!