Automatic failover for MySQL Replication has been subject to debate for many years.

Is it a good thing or a bad thing?

For those with long memory in the MySQL world, they might remember the GitHub outage in 2012 which was mainly caused by software taking the wrong decisions.

GitHub had then just migrated to a combo of MySQL Replication, Corosync, Pacemaker and Percona Replication Manager. PRM decided to do a failover after failing health checks on the master, which was overloaded during a schema migration. A new master was selected, but it performed poorly because of cold caches. The high query load from the busy site caused PRM heartbeats to fail again on the cold master, and PRM then triggered another failover to the original master. And the problems just continued, as summarized below. 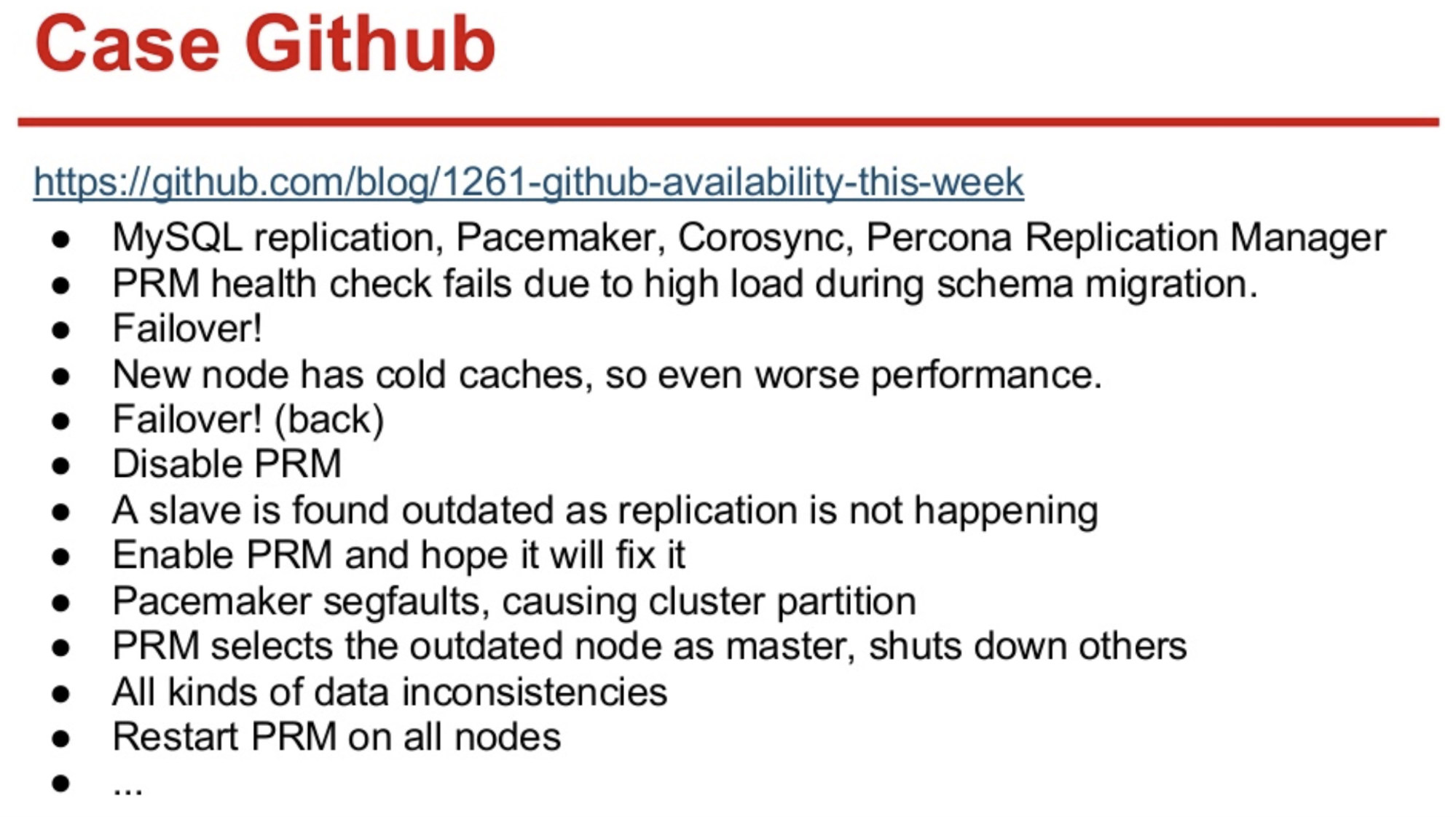 Fast forward a couple of years and GitHub is back with a pretty sophisticated framework for managing MySQL Replication and automated failover! As Shlomi Noach puts it:

“To that effect, we employ automated master failovers. The time it would take a human to wake up & fix a failed master is beyond our expectancy of availability, and operating such a failover is sometimes non-trivial. We expect master failures to be automatically detected and recovered within 30 seconds or less, and we expect failover to result in minimal loss of available hosts.”

Most companies are not GitHub, but one could argue that no company likes outages. Outages are disruptive to any business, and they also cost money. My guess is that most companies out there probably wished they had some sort of automated failover, and the reasons not to implement it are probably the complexity of the existing solutions, lack of competence in implementing such solutions, or lack of trust in software to take such an important decision.

There are a number of automated failover solutions out there, including (and not limited to) MHA, MMM, MRM, mysqlfailover, Orchestrator and ClusterControl. Some of them have been on the market for a number of years, others are more recent. That is a good sign, multiple solutions mean that the market is there and people are trying to address the problem.

When we designed automatic failover within ClusterControl, we used a few guiding principles:

So, should you automate failover? It depends on how you have configured replication. Circular replication setups with multiple write-able masters or complex topologies are probably not good candidates for auto failover. We would stick to the above principles when designing a replication solution.

When it comes to PostgreSQL streaming replication, ClusterControl uses similar principles to automate failover. For PostgreSQL, ClusterControl supports both asynchronous and synchronous replication models between the master and the slaves. In both cases and in the event of failure, the slave with the most up-to-date data is elected as the new master. Failed masters are not automatically recovered/fixed to rejoin the replication setup.

There are a few protective measures taken to make sure the failed master is down and stays down, e.g. it is removed from the load balancing set in the proxy and it is killed if e.g. the user would restart it manually. It is a bit more challenging there to detect network splits between ClusterControl and the master, since the slaves do not provide any information about the status of the master they are replicating from. So a proxy in front of the database setup is important as it can provide another path to the master.

MongoDB replication within a replicaset via the oplog is very similar to binlog replication, so how come MongoDB automatically recovers a failed master? The problem is still there, and MongoDB addresses that by rolling back any changes that were not replicated to the slaves at the time of failure. That data is removed and placed in a ‘rollback’ folder, so it is up to the administrator to restore it.

To find out more, check out ClusterControl