Galera Cluster 4.0 was first released as part of the MariaDB 10.4 and there are a lot of significant improvements in this version release. The most impressive feature in this release is the Streaming Replication which is designed to handle the following problems.

Percona hasn’t released a GA for their Percona XtraDB Cluster (PXC) 8.0 yet as some features are still under development, such as the MySQL wsrep function WSREP_SYNC_WAIT_UPTO_GTID which looks to be not present yet (at least on PXC 8.0.15-5-27dev.4.2 version). Yet, when PXC 8.0 will be released, it will be packed with great features such as…

While we’re waiting for the release of PXC 8.0 GA, we’ll cover in this blog how you can create a Hot Standby Node on Amazon AWS for Galera Cluster 4.0 using MariaDB.

What is a Hot Standby?

It also serves as a data recovery node if the master node or the entire cluster goes down. The hot standby node will replace the failing node or cluster while continuously serving the demand from the clients.

In Galera Cluster, all servers part of the cluster can serve as a standby node. However, if the region or entire cluster goes down, how will you be able to cope up with this? Creating a standby node outside the specific region or network of your cluster is one option here.

In the following section, we’ll show you how to create a standby node on AWS EC2 using MariaDB.

Previously, we have showed you how you can create a Galera Cluster on AWS. You might want to read Deploying MySQL Galera Cluster 4.0 onto Amazon AWS EC2 in the case that you are new to Galera 4.0.

In this sample setup, we deployed 3-node cluster using MariaDB 10.4.8 version. This cluster is being deployed under US East (Ohio) region and the topology is shown below: 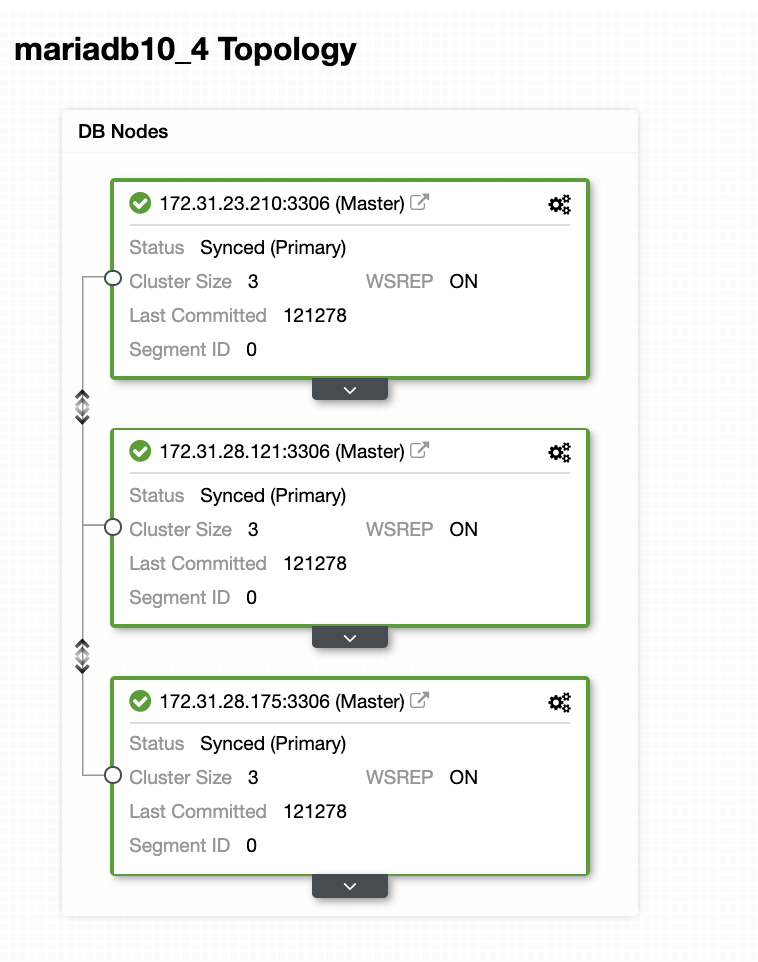 We’ll use 172.31.26.175 server as the master for our asynchronous slave which will serve as the standby node.

Setting up your EC2 Instance for Hot Standby Node

In the AWS console, go to EC2 found under the Compute section and click Launch Instance to create an EC2 instance just like below.

We’ll create this instance under the US West (Oregon) region. For your OS type, you can choose what server you like (I prefer Ubuntu 18.04) and choose the type of instance based on your preferred target type. For this example I will use t2.micro since it doesn’t require any sophisticated setup and it’s only for this sample deployment.

As we’ve mentioned earlier that its best that your hot standby node be located on a different region and not collocated or within the same region. So in case the regional data center goes down or suffers a network outage, your hot standby can be your failover target when things gone bad.

Before we continue, in AWS, different regions will have its own Virtual Private Cloud (VPC) and its own network. In order to communicate with the Galera cluster nodes, we must first define a VPC Peering so the nodes can communicate within the Amazon infrastructure and do not need to go outside the network which just adds overhead and security concerns.

First, go to your VPC from where your hot standby node shall reside, then go to Peering Connections. Then you need to specify the VPC of your standby node and the Galera cluster VPC. In the example below, I have us-west-2 interconnecting to us-east-2. 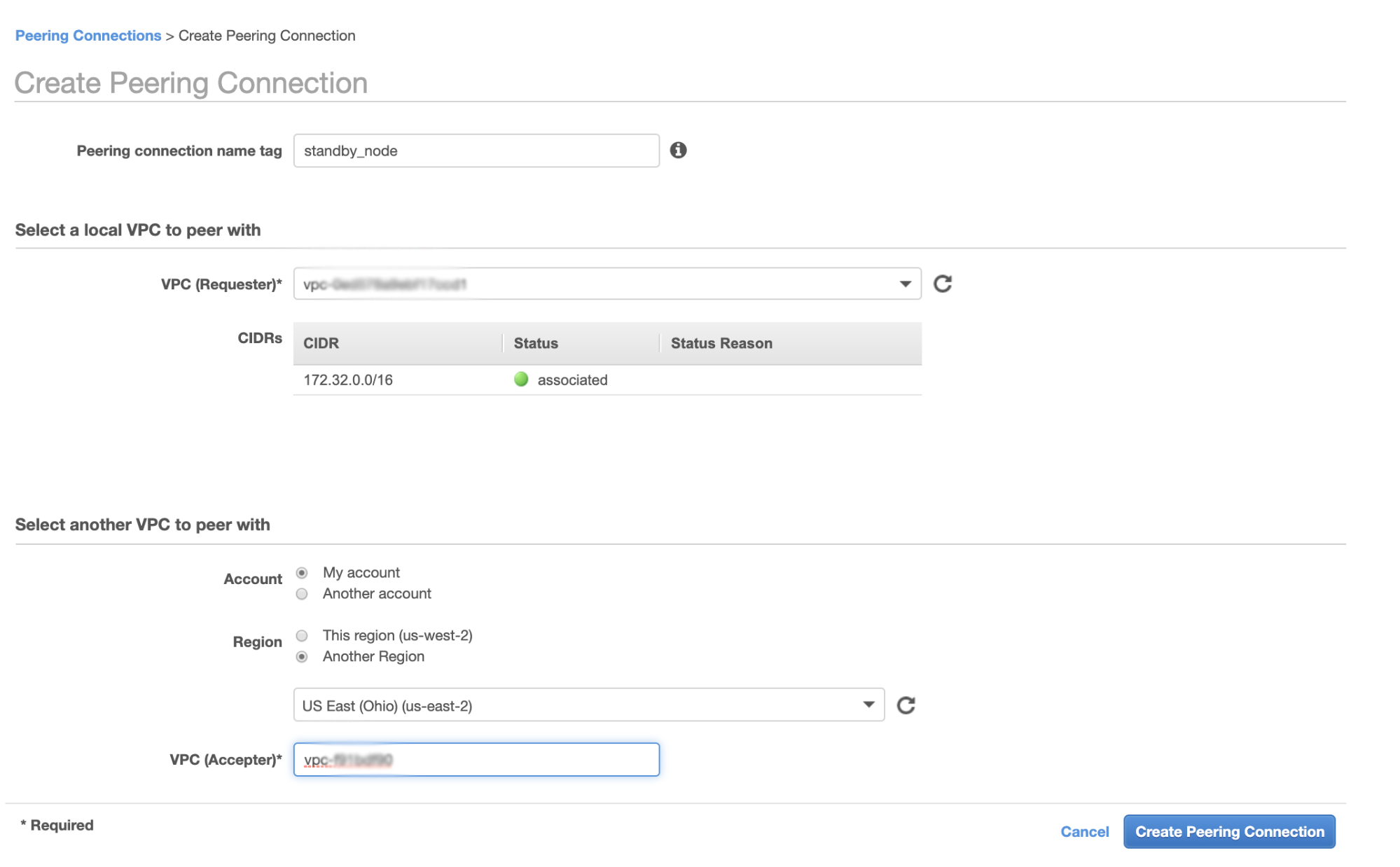 Once created, you’ll see an entry under your Peering Connections. However, you need to accept the request from the Galera cluster VPC, which is on us-east-2 in this example. See below,

Once accepted, do not forget to add the CIDR to the routing table. See this external blog VPC Peering about how to do it after VPC Peering.

Now, let’s go back and continue creating the EC2 node. Make sure your Security Group has the correct rules or required ports that needs to be opened. Check the firewall settings manual for more information about this. For this setup,  I just set All Traffic to be accepted since this is just a test. See below,

Make sure when creating your instance, you have set the correct VPC and you have defined your proper subnet. You can check this blog in case you need some help about that.

Setting up the MariaDB Async Slave

Install the MariaDB packages and its required binaries

Now, let’s take a backup using xbstream to transfer the files to the network from one of the nodes in our Galera Cluster.

## Wipe out the datadir of the newly fresh installed MySQL in your hot standby node.

## Then on the hot standby node, run this on the terminal,

Prepare your MySQL configuration file. Since this is in Ubuntu, I am editing the file in /etc/mysql/my.cnf and with the following sample my.cnf taken from our ClusterControl template,

Of course, you can change this according to your setup and requirements.

Prepare the backup from step #3 i.e. the finish backup that is now in the hot standby node by running the command below,

Set the ownership of the datadir in the hot standby node,

Lastly, we need to setup the asynchronous replication,

## Create the replication user on the master node, i.e. the node in the Galera cluster

## Get the GTID slave position from xtrabackup_binlog_info as follows,

##  Then setup the slave replication as follows,

If you are using ClusterControl, it’s easy to monitor your database server’s health. To add this as a slave, select the Galera node cluster you have then go to the selection button as shown below to Add Replication Slave: 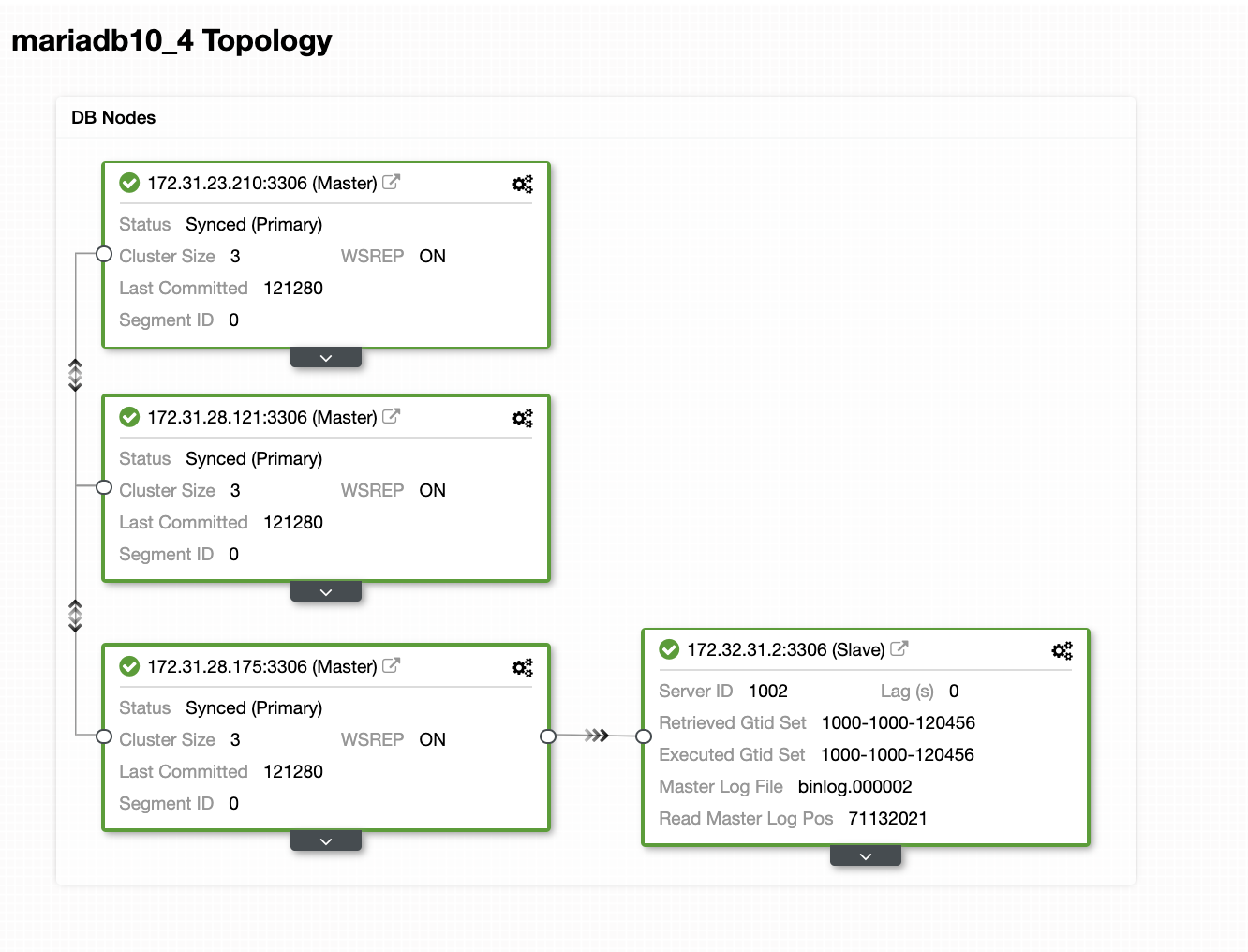 As you might notice, our node 172.32.31.2 serving as our hot standby node has a different CIDR which prefixes as 172.32.% us-west-2 (Oregon) while the other nodes are of 172.31.% located on us-east-2 (Ohio). They’re totally on different region, so in case network failure occurs on your Galera nodes, you can failover to your hot standby node.

Building a Hot Standby on Amazon AWS is easy and straightforward. All you need is to determine your capacity requirements and your networking topology, security, and protocols that need to be setup.

Using VPC Peering helps speed up inter-communication between different region without going to the public internet, so the connection stays within the Amazon network infrastructure.

Using asynchronous replication with one slave is, of course, not enough, but this blog serves as the foundation on how you can initiate this. You can now easily create another cluster where the asynchronous slave is replicating and create another series of Galera Clusters serving as your Disaster Recovery nodes, or you can also use gmcast.segment variable in Galera to replicate synchronously just like what we have on this blog.