MaxScale 2.4 was released on December 21st, 2019, and ClusterControl 1.7.6 supports the monitoring and managing up to this version. However, for deployment, ClusterControl only supports up to version 2.3. One has to manually upgrade the instance manually, and fortunately, the upgrade steps are very straightforward. Just download the latest version from MariaDB MaxScale download page and perform the package installation command.

The following commands show how to upgrade from an existing MaxScale 2.3 to MaxScale 2.4 on a CentOS 7 box:

In this blog post, we are going to highlight some of the notable improvements and new features of this version and how it looks like in action. For a full list of changes in MariaDB MaxScale 2.4, check out its changelog.

This is basically a small improvement with a major impact on MaxScale administration and monitoring task efficiency. The interactive mode for MaxCtrl now has its command history. Command history easily allows you to repeat the executed command by pressing the up or down arrow key. However, Ctrl+R functionality (recall the last command matching the characters you provide) is still not there.

In the previous versions, one has to use the standard shell mode to make sure the commands are captured by .bash_history file.

In MaxScale 2.3 and older, this is what it looks like if you have enabled master-slave replication between MariaDB Clusters:

For MaxScale 2.4, it is now looking like this (pay attention to Galera1’s row):

It’s now easier to see the replication state for all nodes from MaxScale, without the need to check on individual nodes repeatedly.

This is one of the new major features in MaxScale 2.4, where MaxScale is now smart enough to learn which backend MariaDB backend server is the best to process the query. SmartRouter keeps track of the performance, or the execution time, of queries to the clusters. Measurements are stored with the canonical of a query as the key. The canonical of a query is the SQL with all user-defined constants replaced with question marks, for example:

Supposed we are having two sites – Sydney and Singapore as illustrated in the following diagram: 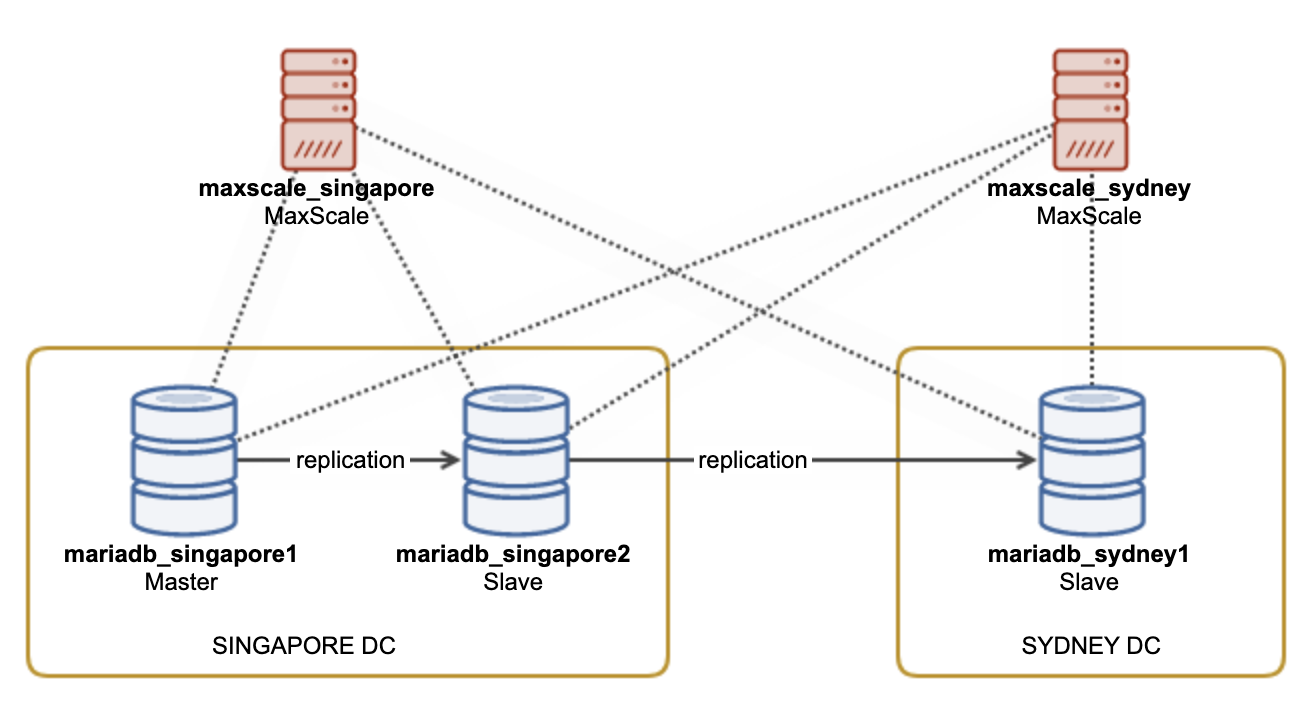 The primary site is located in Singapore and has a MariaDB master and a slave, while another read-only slave is located in Sydney. The application connects to the MaxScale instance located in its respective country with the following port settings:

Our SmarRouter service and listener definitions are:

From the above, we can tell that Sydney’s MaxScale forwarded the above query to our Singapore’s slave, which is not the best routing option per se.

With SmartRouter listening on port 3308, we would see the query is being routed to the nearest slave in Sydney:

And if the same query is executed in our Singapore site, it will be routed to the MariaDB slave located in Singapore:

There is a catch though. When SmartRouter sees a read-query whose canonical has not been seen before, it will send the query to all clusters. The first response from a cluster will designate that cluster as the best one for that canonical. Also, when the first response is received, the other queries are canceled. The response is sent to the client once all clusters have responded to the query or the cancel.

This means, to keep track of the canonical query (normalized query) and measure its performance, you probably will see the very first query fails in its first execution, for example:

From the general log in MariaDB Sydney, we can tell that the first query (ID 74) was executed successfully (connect, query and quit), despite the “Lost connection” error from MaxScale:

While the identical subsequent query was correctly processed and returned with the correct response:

Looking again at the general log in MariaDB Sydney (ID 75), the same processing events happened just like the first query:

From this observation, we can conclude that occasionally, MaxScale has to fail the first query in order to measure performance and become smarter for the subsequent identical queries. Your application must be able to handle this “first error” properly before returning to the client or retry the transaction once more.

There are multiple ways to connect to a running MySQL or MariaDB server. You could use the standard networking TCP/IP with host IP address and port (remote connection), named pipes/shared memory on Windows or Unix socket files on Unix-based systems. The UNIX socket file is a special kind of file that facilitates communications between different processes, which in this case is the MySQL client and the server. The socket file is a file-based communication, and you can’t access the socket from another machine. It provides a faster connection than TCP/IP (no network overhead) and a more secure connection approach because it can be used only when connecting to a service or process on the same computer.

Supposed the MaxScale server is also installed on the MariaDB Server itself, we can use the socket UNIX socket file instead. Under the Server section, remove or comment the “address” line and add the socket parameter with the location of the socket file:

Before applying the above changes, we have to create a MaxScale axscale user from localhost. On the master server:

After a restart, MaxScale will show the UNIX socket path instead of the actual address, and the server listing will be shown like this:

As you can see, the state and GTID information are retrieved correctly through a socket connection. Note that this DB_2 is still listening to port 3306 for the remote connections. It just shows that MaxScale uses a socket to connect to this server for monitoring.

In MaxScale 2.4, the backend servers can be drained, which means existing connections can continue to be used, but no new connections will be created to the server. With the drain feature, we can perform a graceful maintenance activity without affecting the user experience from the application side. Note that draining a server can take a longer time, depending on the running queries that need to be gracefully closed.

To drain a server, use the following command:

The after-effect could be one of the following states:

After a server has been drained, the state of the MariaDB server from MaxScale point of view is “Maintenance”:

MaxScale 2.4 brings a lot of improvements and changes over the previous version and it’s the best database proxy to handle MariaDB servers and all of its components.