Identifying the replication lag in PostgreSQL is not a complicated task to do, but there are a few different approaches to look into the problem. In this blog, we’ll take a look at what things to look at when your PostgreSQL replication is lagging.

Types of Replication in PostgreSQL

Before diving into the topic, let’s see first how replication in PostgreSQL evolves as there are diverse set of approaches and solutions when dealing with replication.

Warm standby for PostgreSQL was implemented in version 8.2 (back in 2006) and was based on the log shipping method. This means that the WAL records are directly moved from one database server to another to be applied, or simply an analogous approach to PITR, or very much like what you are doing with rsync.

This approach, even old, is still used today and some institutions actually prefer this older approach. This approach implements a file-based log shipping by transferring WAL records one file (WAL segment) at a time. Though it has a downside; A major failure on the primary servers, transactions not yet shipped will be lost. There is a window for data loss (you can tune this by using the archive_timeout parameter, which can be set to as low as a few seconds, but such a low setting will substantially increase the bandwidth required for file shipping).

In PostgreSQL version 9.0, Streaming Replication was introduced. This feature allowed us to stay more up-to-date when compared to file-based log shipping. Its approach is by transferring WAL records (a WAL file is composed of WAL records) on the fly (merely a record based log shipping), between a master server and one or several standby servers. This protocol does not need to wait for the WAL file to be filled, unlike file-based log shipping. In practice, a process called WAL receiver, running on the standby server, will connect to the primary server using a TCP/IP connection. In the primary server, another process exists named WAL sender. It’s role is in charge of sending the WAL registries to the standby server(s) as they happen.

Asynchronous Replication setups in streaming replication can incur problems such as data loss or slave lag, so version 9.1 introduces synchronous replication. In synchronous replication, each commit of a write transaction will wait until confirmation is received that the commit has been written to the write-ahead log on disk of both the primary and standby server. This method minimizes the possibility of data loss, as for that to happen we will need for both, the master and the standby to fail at the same time.

The obvious downside of this configuration is that the response time for each write transaction increases, as we need to wait until all parties have responded. Unlike MySQL, there’s no support such as in a semi-synchronous environment of MySQL, it will failback to asynchronous if timeout has occurred. So in With PostgreSQL, the time for a commit is (at minimum) the round trip between the primary and the standby. Read-only transactions will not be affected by that.

As defined in our previous blog, a replication lag is the cost of delay for transaction(s) or operation(s) calculated by its time difference of execution between the primary/master against the standby/slave node.

What To Look for With PostgreSQL Replication Lag

PostgreSQL replication is yet diverse but monitoring the replication health is subtle yet not complicated. In this approach we’ll showcase are based on a primary-standby setup with asynchronous streaming replication. The logical replication cannot benefit most of the cases we’re discussing here but the view pg_stat_subscription can help you collect information. However, we’ll not focus on that in this blog.

The most common approach is to run a query referencing this view in the primary node. Remember, you can only harvest information from the primary node using this view. This view contains the following table definition based on PostgreSQL 11 as shown below:

Where the fields are defined as (includes PG < 10 version),

A sample query would look as follows in PostgreSQL 9.6,

This basically tells you what blocks of location in the WAL segments that have been written, flushed, or applied. It provides you a granular overlook of the replication status.

Queries to Use In the Standby Node

In the standby node, there are functions that are supported for which you can mitigate this into a query and provide you the overview of your standby replication’s health. To do this, you can run the following query below (query is based on PG version > 10),

In older versions, you can use the following query:

What does the query tell? Functions are defined accordingly here,

Using some basic math, you can combine these functions. The most common used function that are used by DBA’s are,

Although this query has been in-practice and is used by DBA’s. Still, it doesn’t provide you an accurate view of the lag. Why? Let’s discuss this in the next section.

PostgreSQL standby nodes, which are in recovery mode, does not report to you the exact state of what’s happening of your replication. Not unless you view the PG log, you can gather information of what’s going on. There’s no query you can run to determine this. In most cases, organizations and even small institutions come up with 3rd party softwares to let them be alerted when an alarm is raised.

One of these is ClusterControl, which offers you observability, sends alerts when alarms are raised or recovers your node in case of disaster or catastrophe happens. Let’s take this scenario, my primary-standby async streaming replication cluster has failed. How would you know if something’s wrong? Let’s combine the following:

Step 1: Determine if There’s a Lag

Step 2: Determine the WAL Segments Received From the Primary and Compare with Standby Node

For older versions of PG < 10, use pg_current_xlog_location.

That seems to look bad.

Step 3: Determine How Bad it Could Be

Now, let’s mix the formula from step #1 and in step #2 and get the diff. How to do this, PostgreSQL has a function called pg_wal_lsn_diff which is defined as,

Now, let’s use it to determine the lag. You can run it in any PG node, since it’s we’ll just provide the static values:

Lastly, you can proceed or even prior to the query look at the logs like using tail -5f to follow and check what’s going on. Do this for both primary/standby nodes. In this example, we’ll see that it has a problem,

When encountering this issue, it’s better to rebuild your standby nodes. In ClusterControl, it’s as easy as one click. Just go to the Nodes/Topology section, and rebuild the node just like below: 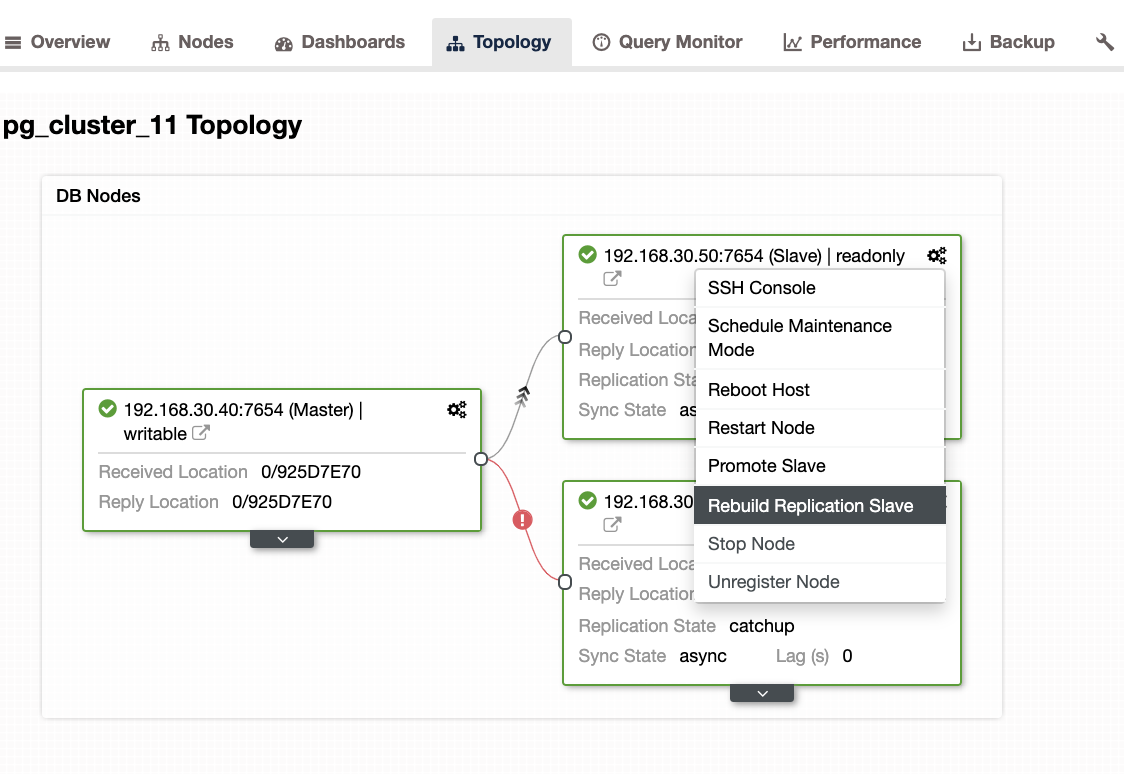 Other Things to Check

You can use the same approach in our previous blog (in MySQL), using system tools such as ps, top, iostat, netstat combination. For example, you can also get the current recovered WAL segment from the standby node,

How Can ClusterControl Help?

ClusterControl offers an efficient way on monitoring your database nodes from primary to the slave nodes. When going to the Overview tab, you have already the view of your replication health: 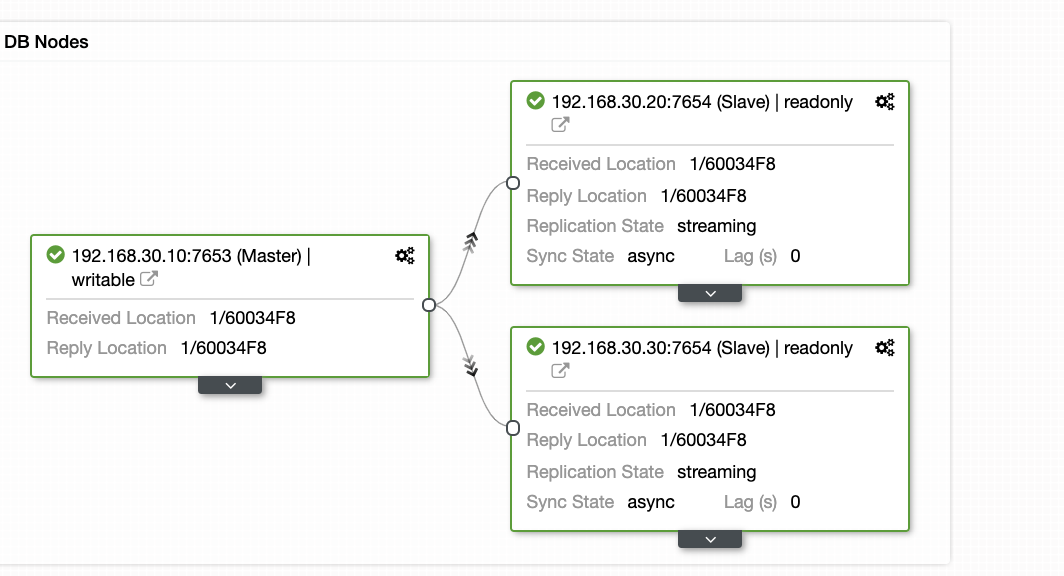 Basically, the two screenshots above displays how’s the replication health and what’s the current WAL segments. That’s not at all. ClusterControl also shows the current activity of what’s going on with your Cluster. 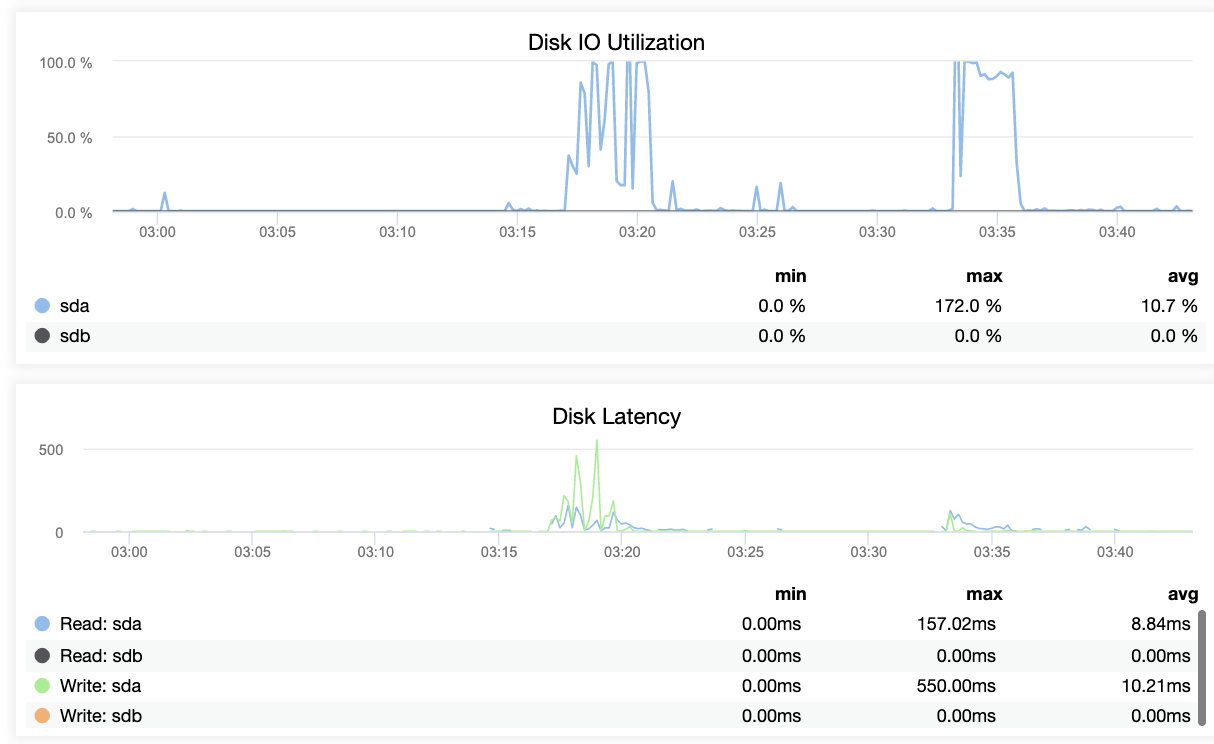 Monitoring the replication health in PostgreSQL can end up on a different approach as long as you are able to meet your needs. Using third party tools with observability that can notify you in case of catastrophe is your perfect route, whether an open source or enterprise. The most important thing is, you have your disaster recovery plan and business continuity planned ahead of such trouble.