In the last couple of blogs, we covered how to run a Galera Cluster on Docker, whether on standalone Docker or on multi-host Docker Swarm with overlay network. In this blog post, we’ll look into running Galera Cluster on Kubernetes, an orchestration tool to run containers at scale. Some parts are different, such as how the application should connect to the cluster, how Kubernetes handles failover and how the load balancing works in Kubernetes.

Our ultimate target is to ensure Galera Cluster runs reliably in a container environment. We previously covered Docker Swarm, and it turned out that running Galera Cluster on it has a number of blockers, which prevent it from being production ready. Our journey now continues with Kubernetes, a production-grade container orchestration tool. Let’s see which level of “production-readiness” it can support when running a stateful service like Galera Cluster.

Before we move further, let us highlight some of key differences between Kubernetes (1.6) and Docker Swarm (17.03) when running Galera Cluster on containers:

We are going to use kubeadm to install a 3-node Kubernetes cluster on CentOS 7. It consists of 1 master and 2 nodes (minions). Our physical architecture looks like this: 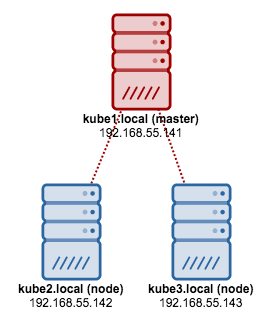 1. Install kubelet and Docker on all nodes:

2. On the master, initialize the master, copy the configuration file, setup the Pod network using Weave and install Kubernetes Dashboard:

3. Then on the other remaining nodes:

4. Verify the nodes are ready:

We now have a Kubernetes cluster for Galera Cluster deployment.

In this example, we are going to deploy a MariaDB Galera Cluster 10.1 using Docker image pulled from our DockerHub repository. The YAML definition files used in this deployment can be found under example-kubernetes directory in the Github repository.

Kubernetes supports a number of deployment controllers. To deploy a Galera Cluster, one can use:

Each of them has their own pro and cons. We are going to look into each one of them and see what’s the difference.

The image that we built requires an etcd (standalone or cluster) for service discovery. To run an etcd cluster requires each etcd instance to be running with different commands so we are going to use Pods controller instead of Deployment and create a service called “etcd-client” as endpoint to etcd Pods. The etcd-cluster.yaml definition file tells it all.

Verify if the etcd cluster is ready: 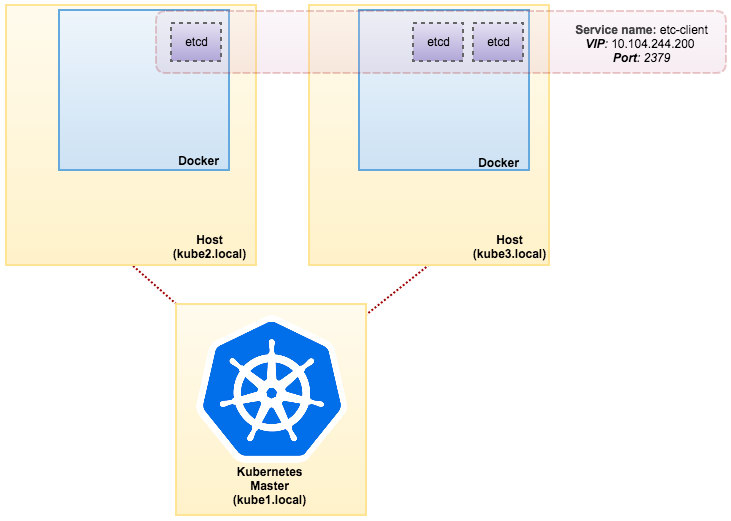 MySQL on Docker: How to Containerize Your Database
Discover all you need to understand when considering to run a MySQL service on top of Docker container virtualization
Download the White Paper

A ReplicaSet ensures that a specified number of pod “replicas” are running at any given time. However, a Deployment is a higher-level concept that manages ReplicaSets and provides declarative updates to pods along with a lot of other useful features. Therefore, it’s recommended to use Deployments instead of directly using ReplicaSets, unless you require custom update orchestration or don’t require updates at all. When you use Deployments, you don’t have to worry about managing the ReplicaSets that they create. Deployments own and manage their ReplicaSets.

In our case, we are going to use Deployment as the workload controller, as shown in this YAML definition. We can directly create the Galera Cluster ReplicaSet and Service by running the following command:

Verify if the cluster is ready by looking at the ReplicaSet (rs), pods (po) and services (svc):

From the output above, we can illustrate our Pods and Service as below: 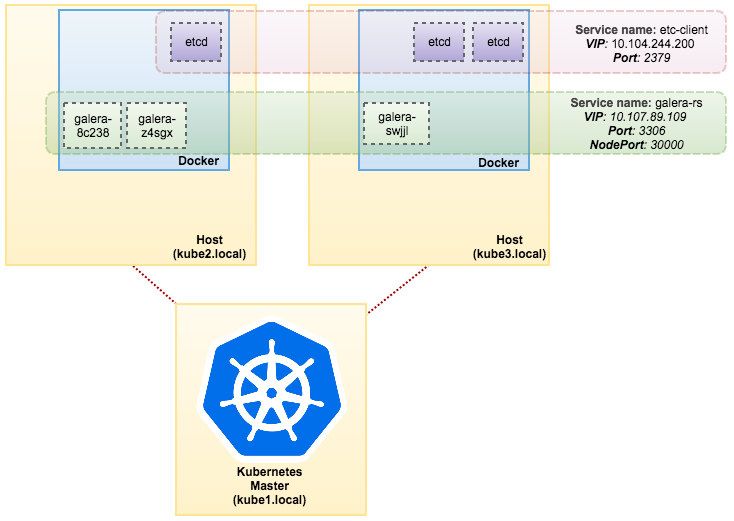 Running Galera Cluster on ReplicaSet is similar to treating it as a stateless application. It orchestrates pod creation, deletion and updates and can be targeted for Horizontal Pod Autoscales (HPA), i.e. a ReplicaSet can be auto-scaled if it meets certain thresholds or targets (CPU usage, packets-per-second, request-per-second etc).

If one of the Kubernetes nodes goes down, new Pods will be scheduled on an available node to meet the desired replicas. Volumes associated with the Pod will be deleted, if the Pod is deleted or rescheduled. The Pod hostname will be randomly generated, making it harder to track where the container belongs by simply looking at the hostname.

All this works pretty well in test and staging environments, where you can perform a full container lifecycle like deploy, scale, update and destroy without any dependencies. Scaling up and down is straightforward, by updating the YAML file and posting it to Kubernetes cluster or by using the scale command:

Known as PetSet on pre 1.6 version, StatefulSet is the best way to deploy Galera Cluster in production, because:

To create a persistent storage, first we have to create PersistentVolume for every pod. PVs are volume plugins like Volumes in Docker, but have a lifecycle independent of any individual pod that uses the PV. Since we are going to deploy a 3-node Galera Cluster, we need to create 3 PVs:

The above definition shows we are going to create 3 PV, mapped to the Kubernetes nodes’ physical path with 10GB of storage space. We defined ReadWriteOnce, which means the volume can be mounted as read-write by only a single node. Save the above lines into mariadb-pv.yml and post it to Kubernetes:

Next, define the PersistentVolumeClaim resources:

The above definition shows that we would like to claim the PV resources and use the spec.selector.matchLabels to look for our PV (metadata.labels.app: galera-ss) based on the respective pod index (metadata.labels.podindex) assigned by Kubernetes. The metadata.name resource must use the format “{volumeMounts.name}-{pod}-{ordinal index}” defined under the spec.templates.containers so Kubernetes knows which mount point to map the claim into the pod.

Save the above lines into mariadb-pvc.yml and post it to Kubernetes:

Our persistent storage is now ready. We can then start the Galera Cluster deployment by creating a StatefulSet resource together with Headless service resource as shown in mariadb-ss.yml:

Now, retrieve the summary of our StatefulSet deployment:

At this point, our Galera Cluster running on StatefulSet can be illustrated as in the following diagram: 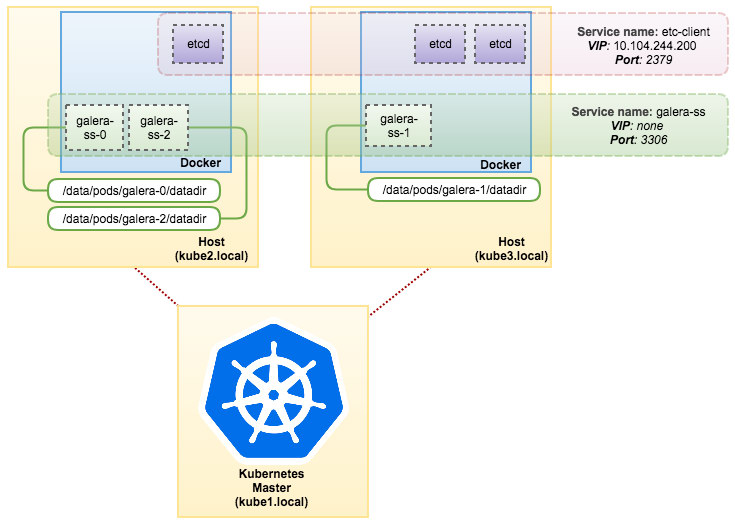 Running on StatefulSet guarantees consistent identifiers like hostname, IP address, network ID, cluster domain, Pod DNS and storage. This allows the Pod to easily distinguish itself from others in a group of Pods. The volume will be retained on the host and will not get deleted if the Pod is deleted or rescheduled onto another node. This allows for data recovery and reduces the risk of total data loss.

On the negative side, the deployment time will be N-1 times (N = replicas) longer because Kubernetes will obey the ordinal sequence when deploying, rescheduling or deleting the resources. It would be a bit of a hassle to prepare the PV and claims before thinking about scaling your cluster. Take note that updating an existing StatefulSet is currently a manual process, where you can only update spec.replicas at the moment.

Example to connect to the Galera Cluster externally:

Within the Kubernetes network space, Pods can connect via cluster IP or service name internally which is retrievable by using the following command:

From the service list, we can see that the Galera Cluster ReplicaSet Cluster-IP is 10.107.89.109. Internally, another pod can access the database through this IP address or service name using the exposed port, 3306:

You can also connect to the external NodePort from inside any pod on port 30000:

Connection to the backend Pods will be load balanced accordingly based on least connection algorithm.

At this point, running Galera Cluster on Kubernetes in production seems much more promising as compared to Docker Swarm. As discussed in the last blog post, the concerns raised are tackled differently with the way Kubernetes orchestrates containers in StatefulSet, (although it’s still a beta feature in v1.6). We do hope that the suggested approach is going to help run Galera Cluster on containers at scale in production.