There are so many database management systems (DBMS) to choose from ranging from relational to non-relational DBMS. In the past years, the Relational DBMS where more dominant but with recent data structure trends the non-relational DBMS are becoming more popular. The choices for relational DBMS are quite obvious: MySQL, PostgreSQL and MS SQL. On the other hand, MongoDB a non-relational DBM has come to rise basically due to its ability to handle a large set of data. Every selection has got its pros and cons but your choice will mainly be determined by your application needs since both serve in different niches. However, in this article, we are going to discuss the pros of using MongoDB over MySQL.

Pros of Using MongoDB Over MySQL

This is one of the major benefits of using MongoDB over MySQL especially when a large set of unstructured data is involved. MongoDB by default encourages high insert rate over transaction safety. This feature is not available in MySQL hence for instance if you are to save a lot of data to your DBM at once, in the case of MySQL you will have to do it one by one. But in the case of MongoDB, with the availability of insertMany() function, you can safely do the multiple inserts. Observing some of the querying behaviours of the two, we can summarize the different operation requests for 1 million documents in the illustration below. 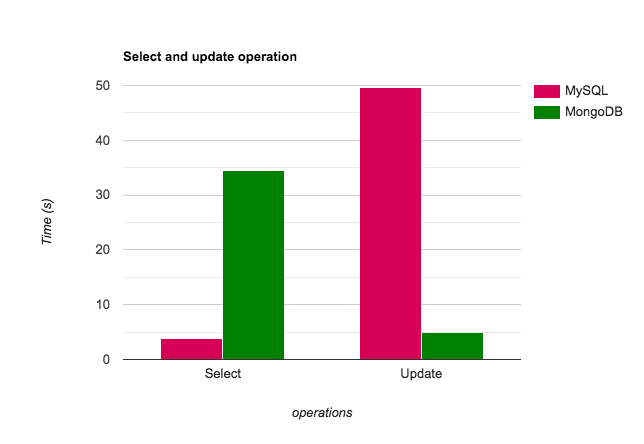 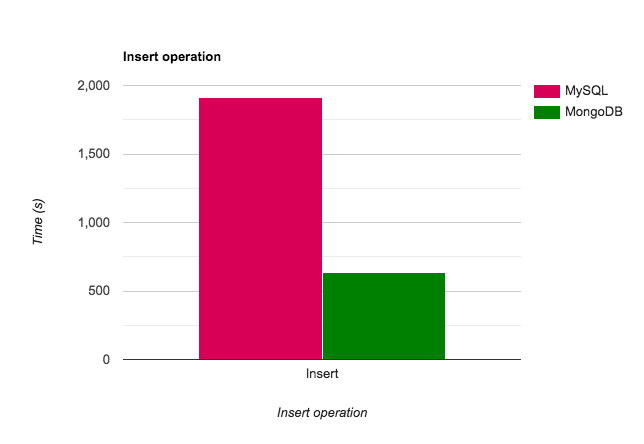 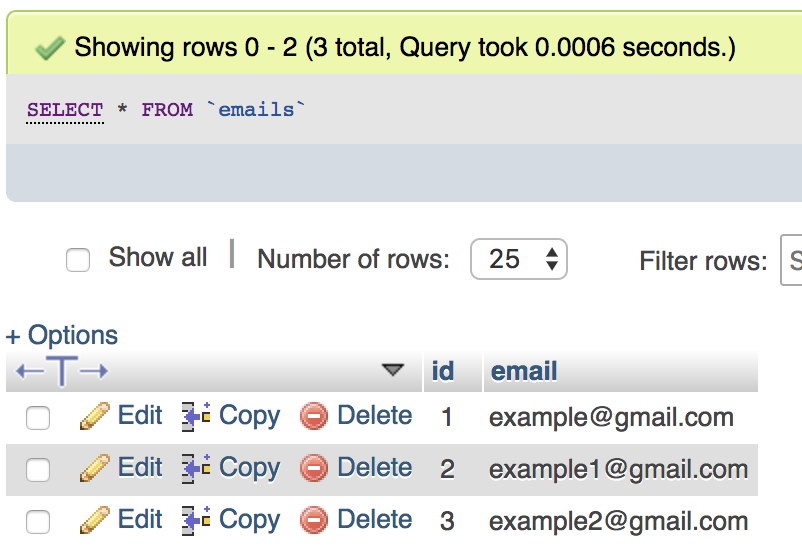 In the case of updating which is a write operation, MongoDB takes 0.002 seconds to update all student emails whereas MySQL takes 0.2491s to execute the same task.

From the illustration, we can conclude that MongoDB takes way lesser time than MySQL for the same operations. MongoDB is mainly structured such that documents are the basis of storage which promotes huge query and data storage. This implies that the performance is dependent on two key values that are the design and scale out. On the other hand, MySQL has data stored in an individual table hence at some point one has to lookup on the entire table before doing a write operation.

For unstable environments, MongoDB provides a better handling technique than MySQL. This is because it takes very less time for the active secondary nodes to elect a new primary node thus easy administration at the point of failure. Besides, due to comprehensive secondary indexes and native replication, creating a backup for a MongoDB database is quite easy as compared to MySQL since the latter has integrated replication support.

In a nutshell, setting a set of servers that can act as Master-Slaves is easy and fast in MongoDB than MySQL. Besides, recovery from a cluster failure is instant, automatic and safe. For MySQL, there is no clear official solution for providing failover between master and slave in the event of a failure.

Cloud-based storage solutions require data to be smoothly spread across various server to scale up. MongoDB can load a high volume of data as compared to MySQL and with built-in sharding, it is easy to partition and spread out data across multiple servers as a way of utilizing the cost-saving solution as per the cloud-based storage merits.

MongoDB is schemaless such that different documents in the same collection may have the same or different fields from each other. This means there is no restriction on document structure for every insert or update hence changes to the data model won’t have much impact. Of course, there are scenarios that can opt one to use undefined schema for example if you are de-normalizing a database schema or when your database is growing but your schema is unstable. MongoDB therefore allows one to add various types of data as per needs change.

On the other hand, MySQL is table oriented whereby each row must have the same columns as the other rows. Adding a new column would require one to run an ALTER operation which is quite expensive in terms of performance as it will have to lock up the entire database. This is especially the case when the table grows over 10GB, MongoDB does not have this issue.

With a flexible schema it is easy to develop and maintain a cleaner code. Besides, MongoDB provides the option of using a JSON validator in case you want to ensure some data integrity and consistency for your collection hence you can do some validation before insert or update of a document.

The Need to Grow Bigger

Databases scaling is not an easy undertaking especially with MySQL it may result in degraded performance when the 5-10GB per table memory is surpassed. With MongoDB, this is not an issue since one can partition and shard the database with the In-built sharding feature. Once a shard key is specified and sharding is enabled, data is partitioned evenly according to the shard key. If a new shard is added, there is automatic rebalancing. Sharding basically allows horizontal scaling which is difficult to implement in MySQL. Besides, MongoDB has got built-in replication whereby replica sets create multiple copies of the data. Each member of this set has a role either as primary or secondary at any point in the process.

Reads and writes are done on the primary and then replicated to the secondaries. With this merit in place, in case of data inconsistency or instance failure, a new member may be voted in to act as primary.

Unlike MySQL where you cannot embed data to a field, MongoDB offers a better embedding technique for related data. As much as you can do a JOIN for tables in MySQL, you may end up having so many tables with some being unnecessary especially if they don’t involve so many fields. In the case of MongoDB you can decide to embed data into a field for related data or reference from another collection if you expect the document grow in future beyond the JSON document size.

For example if we have data for users who we want to capture their addresses and some other information, in the case of MongoDB we can easily have a simple structure like

But in the case of MySQL we will have to make 2 tables with an id referencing in this case. I.e

In MySQL you will have so many tables which could be so hectic to deal with especially when scaling is involved. As much as one can also do a table join in a single query when fetching this data in MySQL, the latency is quite larger as compared to MongoDB and this is one of the reasons that makes the performance of MongoDB outdo the performance of MySQL.

Database administration (DBA) is quite essential in MySQL but not necessary in the case of MongoDB. This means you need to have the DBA to modify a schema in the case of MySQL when an application changes. On the other hand, one can do schema modification without DBA in MongoDB since it is great for class persistence and a class can equally be serialized to JSON and stored. However, this is the best practice if you don’t expect the data to grow big otherwise you will need to follow some best practices to avoid pitfalls.

In order to improve on throughput operations especially read operations, MongoDB provides built-in special functions that enhance finding relevant data from specific locations which are accurate hence fastening the process. This is not possible in the case of MySQL.

On a personal interest as a MongoDB enthusiast, I got my attraction with flexibility on querying feature of MongoDB. Regarding the aggregation framework in the later versions and MapReduce feature, one can optimize the result data to suit own specifications. As much as MySQL also offers operations such as grouping, sorting and many more, MongoDB is quite extensive especially with embedded data structures. Further as mentioned early, queries are returned with lesser latency in the aggregation framework than when a JOIN was to be done in the case of MySQL. For instance, MongoDB offers an easy way of modifying a schema using the $set and $unset operations for the embedded schema. But, in the case of MySQL, one has to do the ALTER command for the only table within which the field exists and this is quite expensive in terms of performance.

Regarding the merits discussed above, as much as database selection absolutely depends on application design MongoDB offers a lot of flexibility along different lines. If you are looking for something that will cater for better performance, dealing with complex data hence no need restrictions on schema design, future expectations on database growth and rich query language technique, I would recommend you to go for MongoDB.