MariaDB Enterprise Backup is a backup solution from MariaDB Corporation with a number of features such as non-blocking backups, full backup, incremental backup, partial backup and Point in Time Recovery.

We often get questions about the differences between MariaDB Backup and ClusterControl’s backup management features. So this is what this blog is about.

Creating backups vs managing them

MariaDB Backup is a fork of Percona XtraBackup, and is a tool to take physical backups of MariaDB server. It allows you to do things like full, incremental, partial backups. One can also perform point in time recovery with the help of binary logs. According to the documentation, the ‘Enterprise’ version of MariaDB backup provides “DDL statement tracking, which reduces lock-time during backups”.

ClusterControl supports MariaDB Backup as a backup method for MariaDB. It provides a graphical user interface to schedule full backups, incremental backups and partial backups, and perform recovery of backup files or also automates point in time recovery. In addition, ClusterControl provides features like encryption, compression, upload to the cloud storage (Azure, AWS, Google Cloud) and automatic verification of backups to ensure they are recoverable.

If you want to backup and restore, you just pass the mandatory parameter after mariabackup command. For a full backup command, below is a sample script using MariaDB Backup.

There are some options you need to define, such as –target-dir, which is the target location for backup files, –user, used for credential users for backup, and –password for the credential backup password.

After you run prepare, it will make the backup ready to be restored. You will see the message on the last line as below,  when the prepare was successful.

You can run the restore command using copy-back. Here is the sample script to restore the backup:

You can put the above script in a shell script command and give executable permission, configure it on the operating system scheduler.

There are two options on how you want to do the backup; you can create the backup directly or you can schedule the backup. 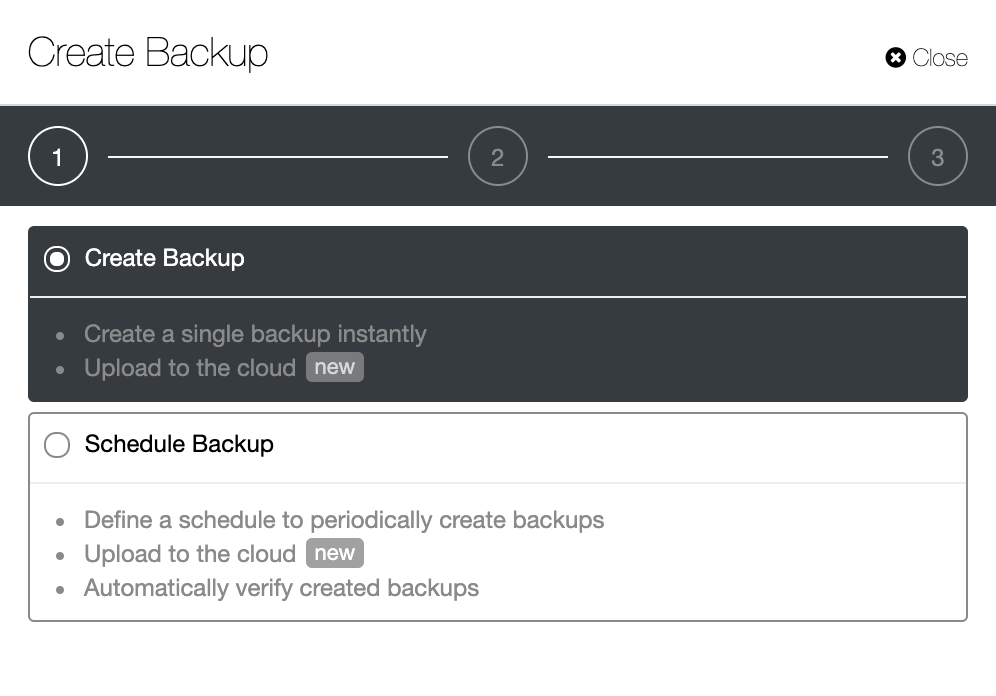 You can also enable some options like encryption, compression, parallel copy thread as shown below : 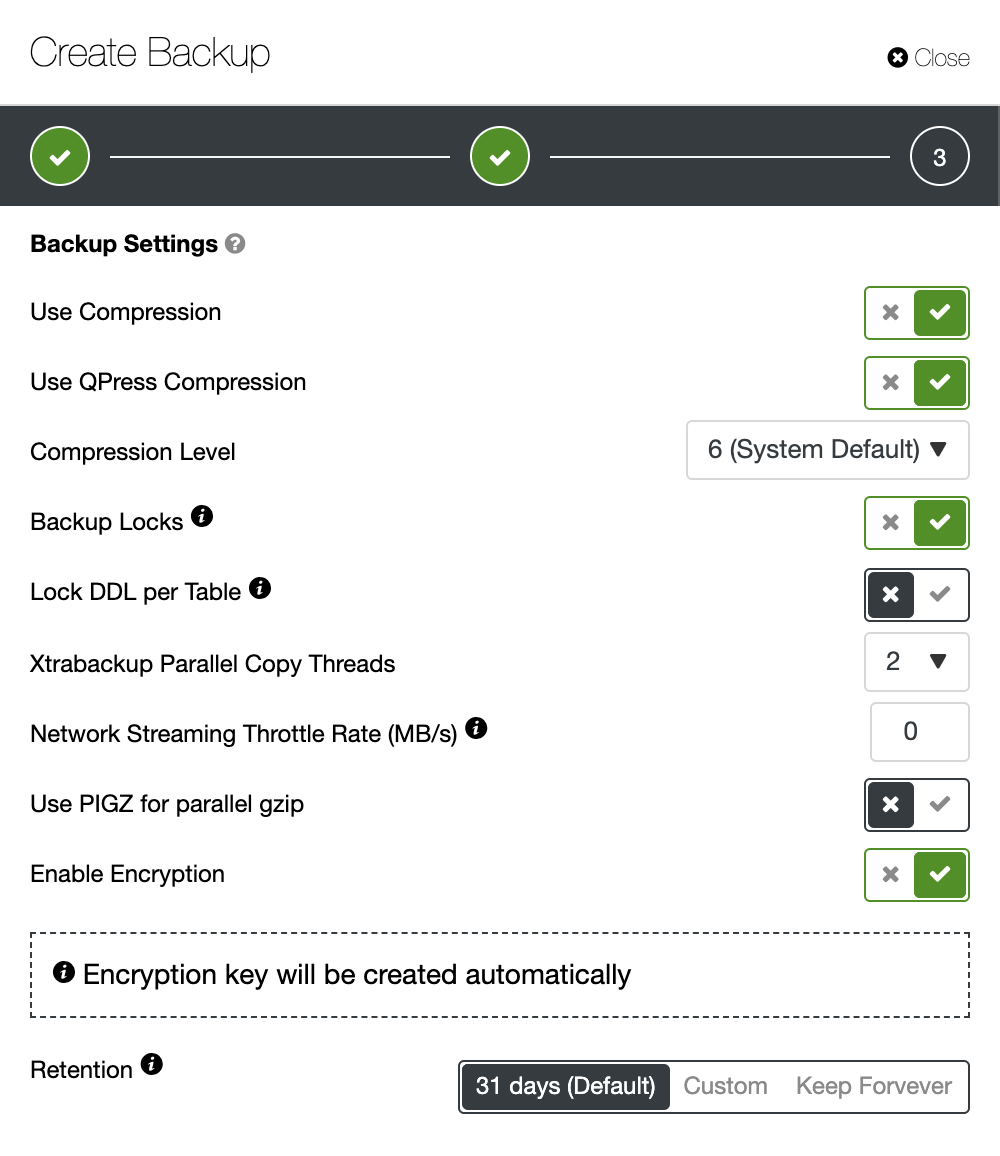 Restoring the backup is as easy as the backup was created. You just need to select the full backup file that you want to restore. 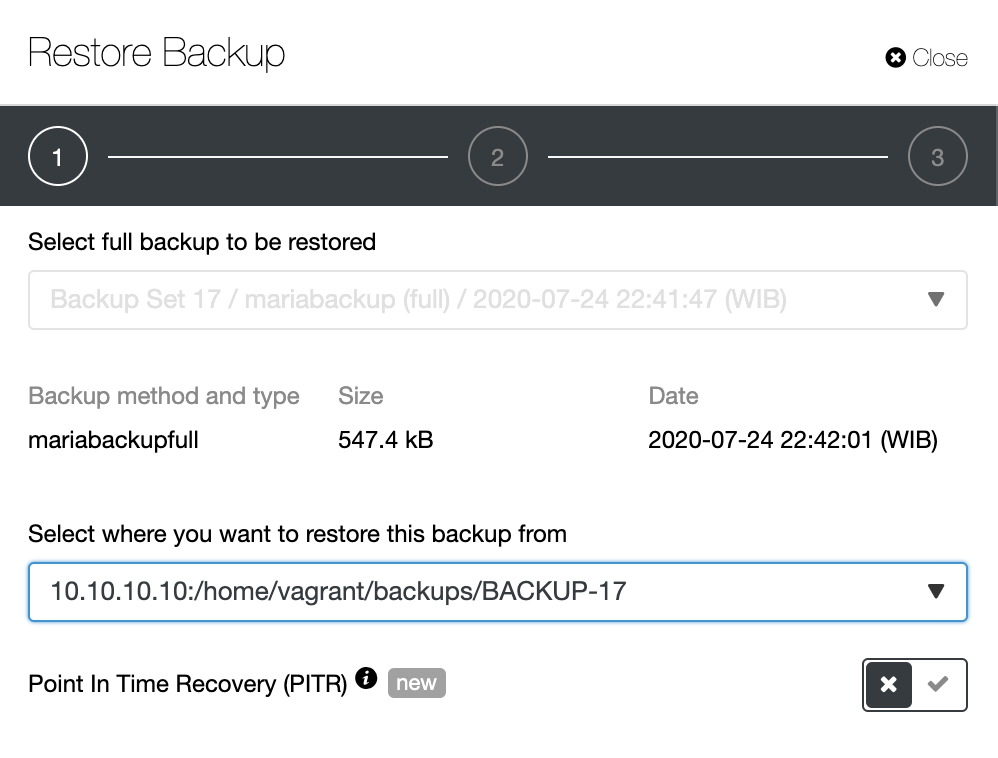 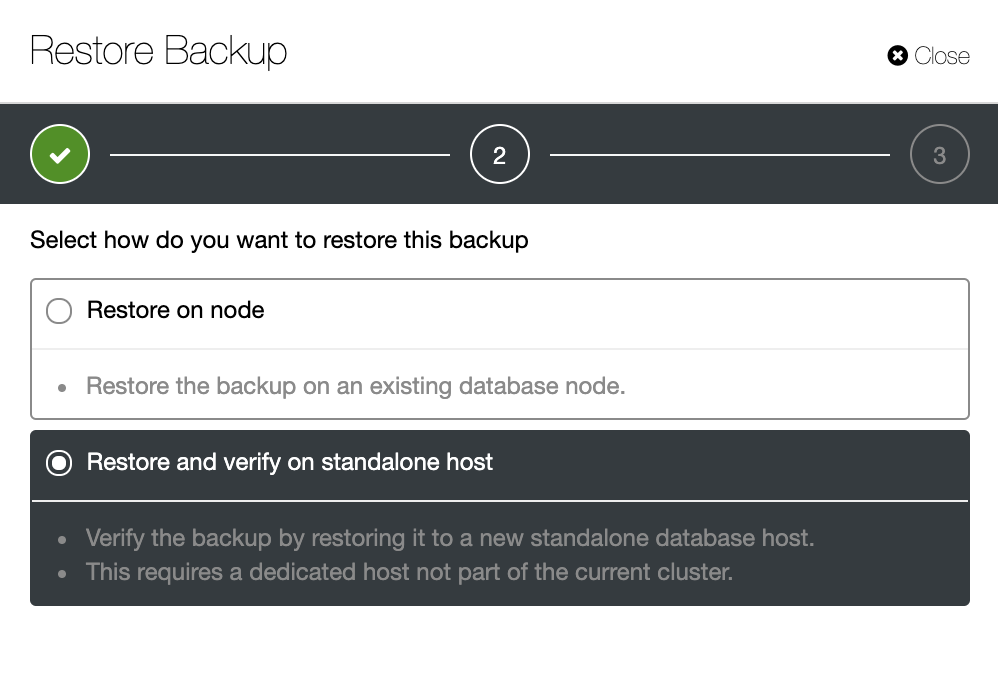 Taking a full backup of a very large database will be time consuming and resource intensive. Incremental backup is used to perform backup of the changes after the last full backup was taken.

Restoring the prepared full backup with all the incremental changes can be done through : 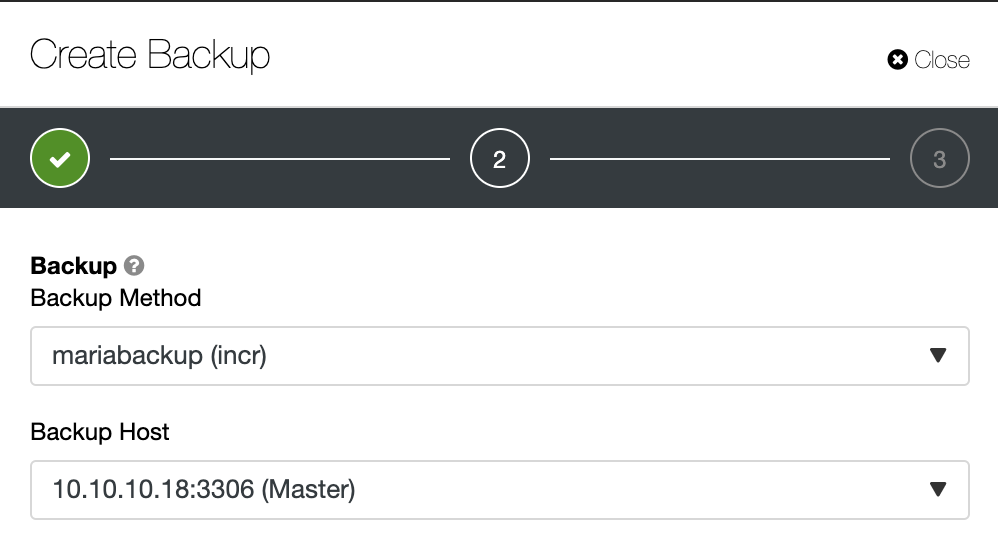 Below is a sample script to do the partial backup, for the card_data table.

You still need to prepare the full partial backup to make the backup point-in-time consistent by running the below command :

Performing partial restore is very different compared to restoring full backup and incremental backup. You need to prepare the tables and database in the running MariaDB Server, and then manually copy the data files into mysql data directory.

For example, you want to do a partial restore for the card_data table (non-partitioned table).

Partial Backup in ClusterControl is really straightforward, you just need to enable the Partial Backup option. It will give you the option to include or exclude database and tables as shown below : 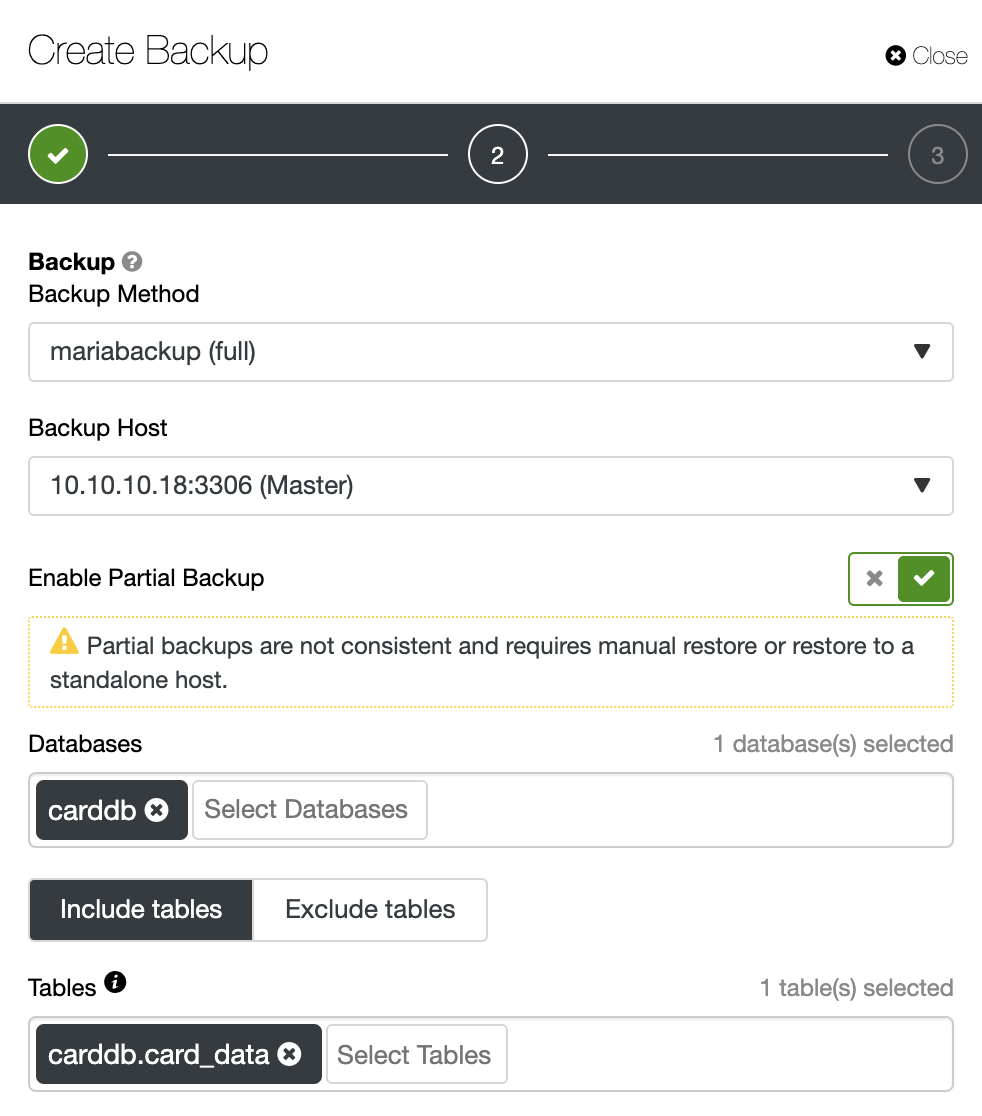 The next part is similar to the full backup and incremental backup, you can choose settings like encryption and compression.

Restoring the full backup or incremental backup does give you a backup from the time the backup was taken, but it does not give you any data that came after the backup was taken. These changes would be in the binary log. When you perform the prepared backup with binlog enabled, there will be a file called xtrabackup_binlog_info. The file contains a binary log file and position of the last sequence number.

You can perform the point in time recovery by extracting the changes to SQL, like after the restore has been done. You can run mysqlbinlog to extract the specific time in the source database node, and apply the SQL in the target/restored database node.

Point in Time Recovery (PITR) in ClusterControl can be enabled as shown below: 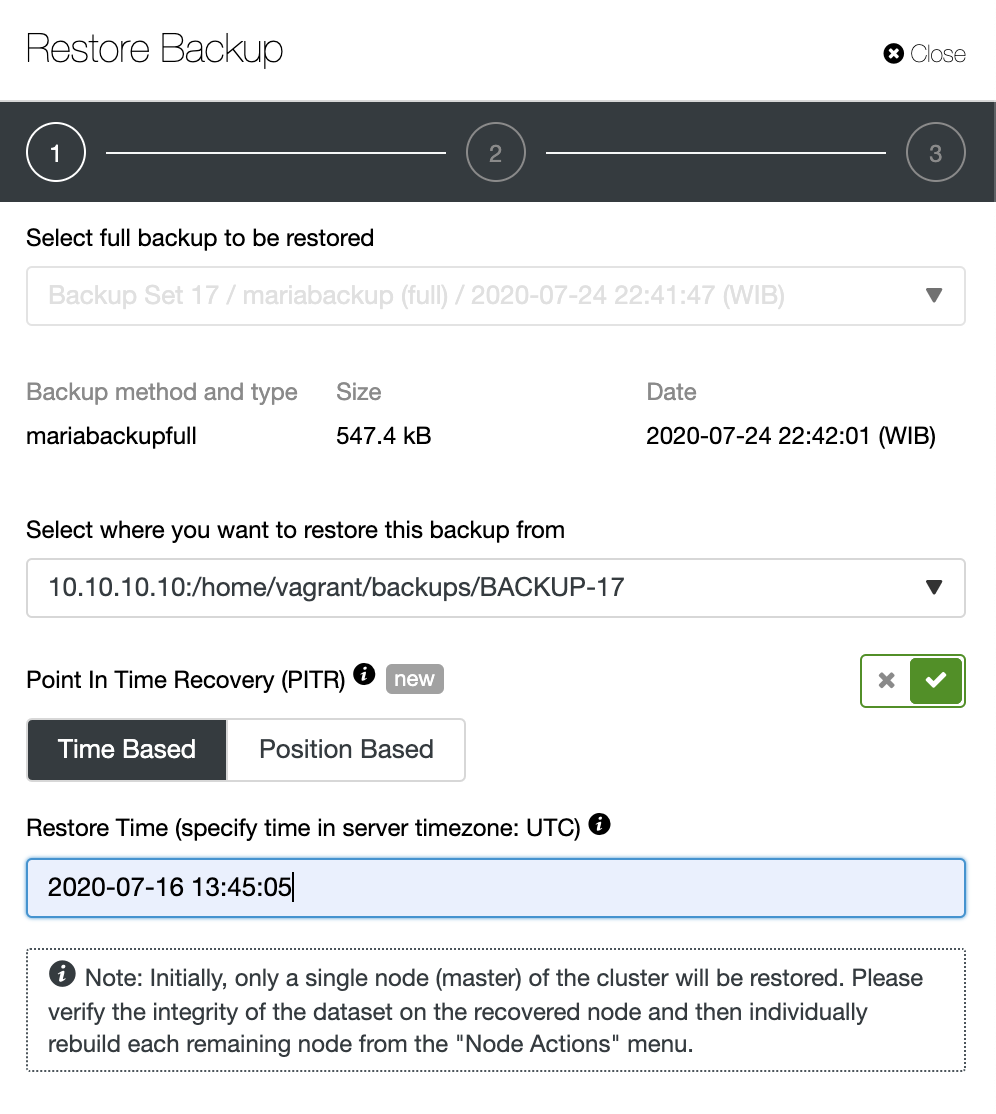 That’s it for now. As we have seen above, MariaDB Backup is a nice tool with lots of options. ClusterControl provides an easy to use GUI to perform the backup procedures. It also adds a number of features like encryption, compression, scheduling, retention management and automatic backup verification.