Performing regular backups of your database cluster is imperative for high availability and disaster recovery. If for any reason you lost your entire cluster and had to do a full restore from backup, you would need a reliable and up-to-date backup to start from.

Some recommendations to consider for a good scheduled backup regime:

A weekly full backup combined with daily incremental backup is normally enough. Keeping a number of backups for a period of time is always a good plan, maybe keep each weekly backup for one month. This allows you to recover an older database in case of emergencies or if for some reason you have local backup file corruption.

mysqldump is very likely the most popular way of backing up MySQL. It does a logical backup of the data, reading from each table using SQL statements then exporting the data into text files. Restoration of a mysqldump is as easy as creating the dump file. The main drawbacks are that it is very slow for large databases, it is not ‘hot’ and it wipes out the InnoDB buffer pool.

Xtrabackup performs hot backups, does not lock the database during the backup and is generally faster. Hot backups are important for high availability, as they run without blocking the application. This is also an important factor when used with Galera, as Galera relies on synchronous replication. However, restoring an xtrabackup can be a little tricky using manual ways.

ClusterControl supports the scheduling of both mysqldump and Xtrabackup (full and incremental), as well as the backup restoration right from the UI.

In this post, we will show you how to restore Xtrabackup (full + incremental) onto an empty cluster running on MariaDB Galera Cluster. These steps should also work on Percona XtraDB Cluster or Galera Cluster for MySQL from Codership.

In our original cluster, we had a full xtrabackup scheduled daily, with incremental backups created every hour. The backups are stored on ClusterControl as shown in the following screenshot: 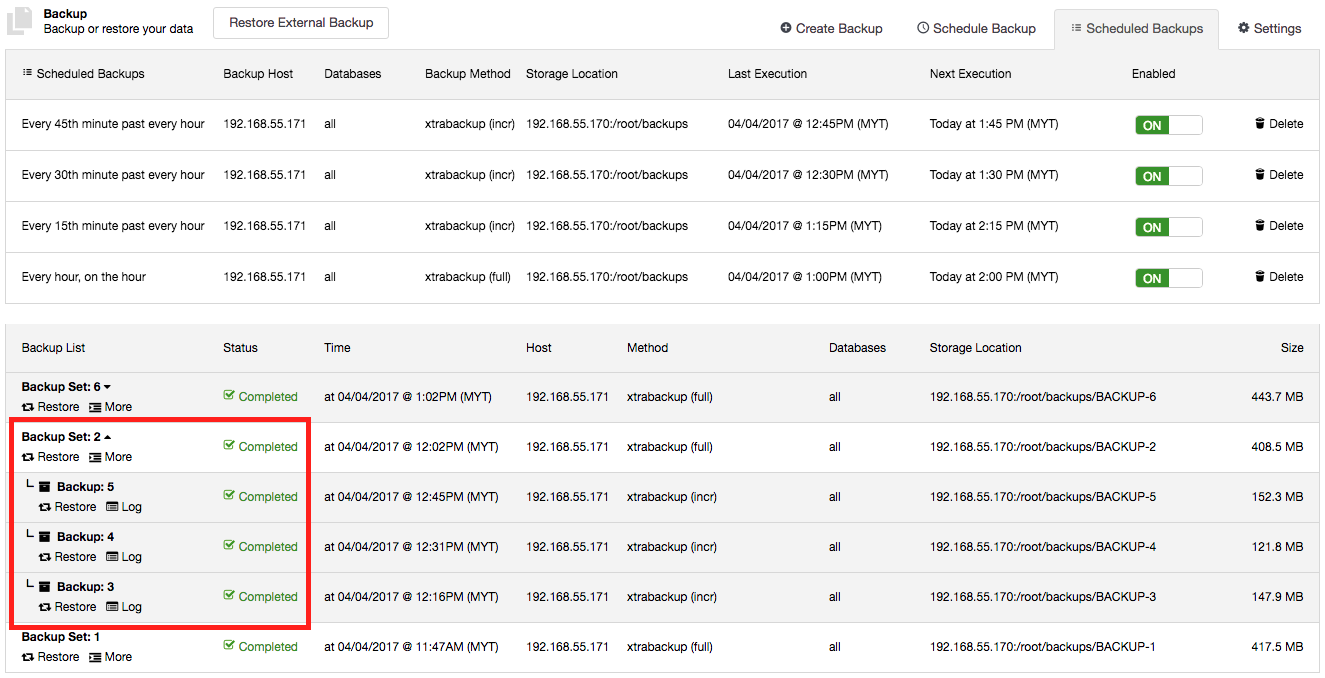 Now, let’s assume we have lost our original cluster and have to do a full restore onto a new cluster. The steps include:

The following diagram illustrates our architecture for this exercise: 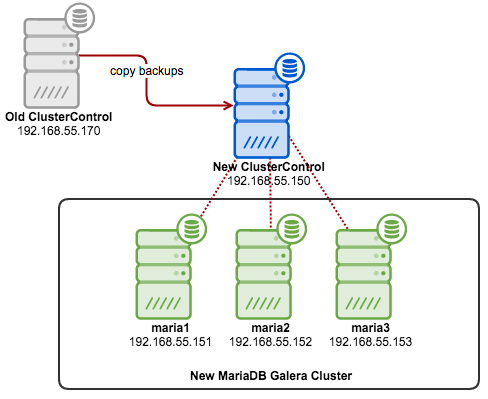 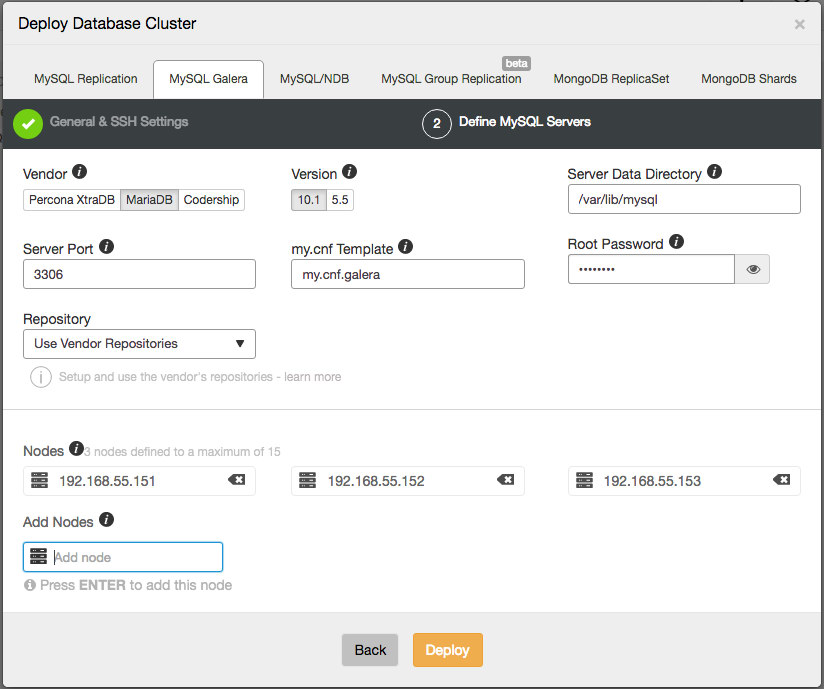 Click on the Deploy button and start the deployment. Since we only have a cluster on the old server so the cluster ID should be identical (cluster ID: 1) in this new instance.

Step 2 – Export and import the backup files
Once the cluster is deployed, we will have to import the backups from the old ClusterControl server into the new one. First, export the content of cmon.backup_records to dump files. Since the old cluster ID and the new one is identical, we just need to modify the dump file with the new IP address and import it to the new ClusterControl node. If the cluster ID is different, then you have to change “cid” value accordingly inside the dump files before importing into CMON DB on the new node. Also, it is easier to keep the backup storage location as in the old server so the new ClusterControl can locate the backup files in the new server.

On the old ClusterControl server, export the backup_records table into dump files:

Then, perform remote copy of the backup files from the old server into the new ClusterControl server:

Next is to modify the dump files to reflect the new ClusterControl server IP address. Don’t forget to escape the dot in the IP address:

On the new ClusterControl server, import the dump files:

Verify that the backup list is correct in the new ClusterControl server:

Performing restoration through the ClusterControl UI is a simple point-and-click step. Choose which backup to restore and click on the “Restore” button. We are going to restore the latest incremental backup available (Backup: 9). Click on the “Restore” button just below the backup name and you will be presented with the following pre-restoration dialog: 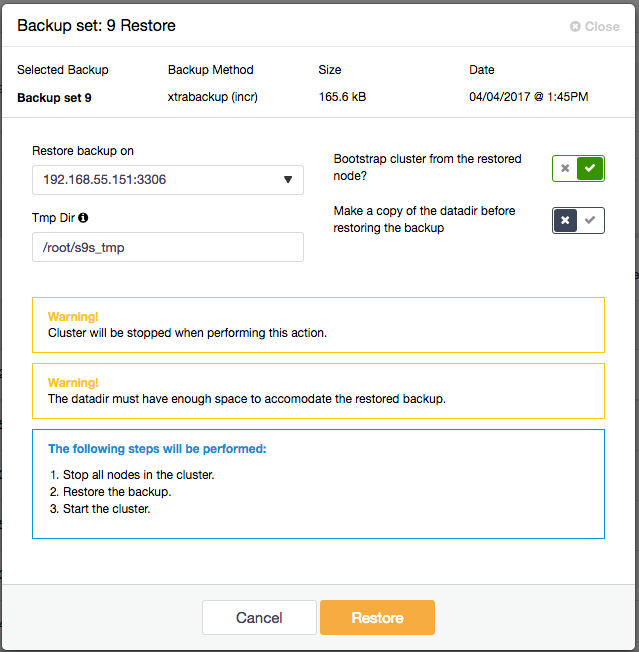 Looks like the backup size is pretty small (165.6 kB). It doesn’t really matter because ClusterControl will prepare all incremental backups grouped under Backup Set 6, which holds the full Xtrabackup. You also have several post-restoration options:

Percona Xtrabackup restoration will cause the cluster to be stopped. ClusterControl will:

To see the restoration progress, go to Activity -> Jobs -> Restore Backup and click on the “Full Job Details” button. You should see something like this: 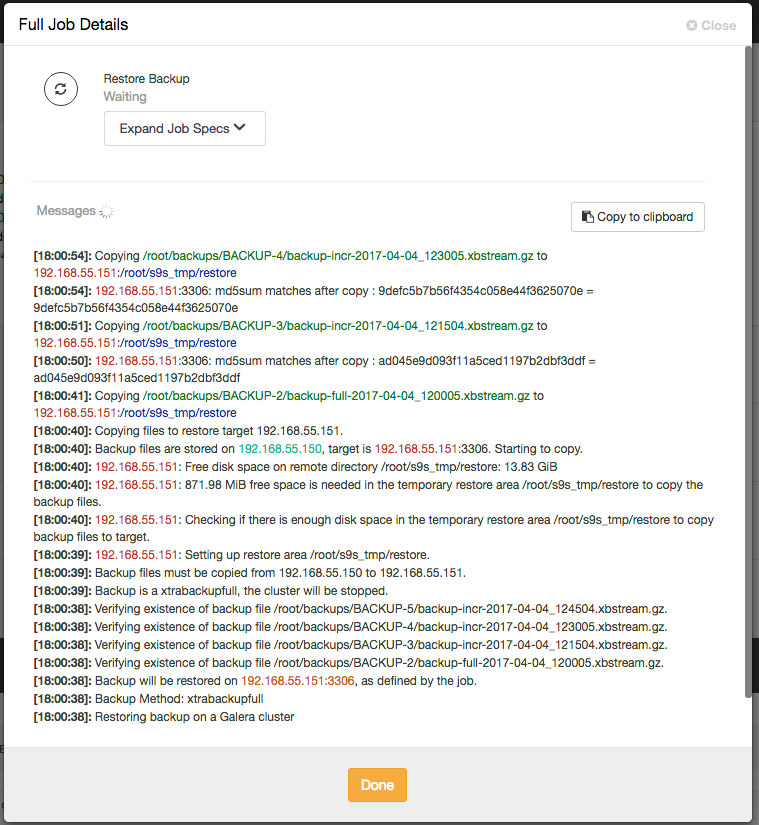 One important thing that you need to do is to monitor the output of the MySQL error log on the target node (192.168.55.151) during the restoration process. After the restoration completes and during the bootstrapping process, you should see the following lines starting to appear:

Don’t panic. This is an expected behaviour because this backup set doesn’t store the cmon login credentials of the new ClusterControl cmon password. It has restored/replaced the old cmon user instead. What you need to do is to re-grant cmon user back to the server by running the following statement on this DB node:

ClusterControl then would be able to connect to the bootstrapped node and determine the node and backup state. If everything is OK, you should see something like this:

At this point, the target node is bootstrapped and running. We can start the remaining nodes under Nodes -> choose node -> Start Node and check the “Perform an Initial Start” checkbox: 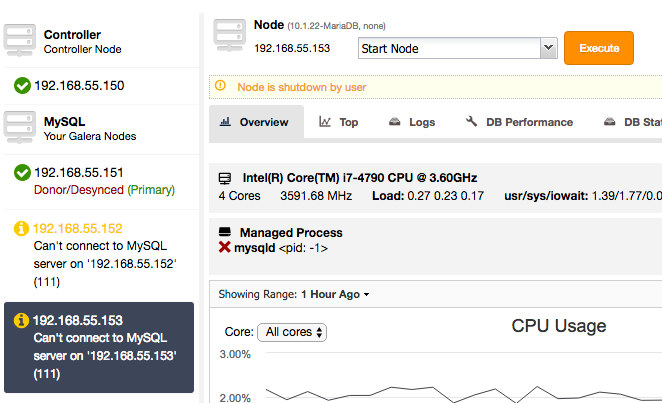 The restoration is now complete and you can expect Performance -> DB Growth to report the updated size of our newly restored data set :