We like our 9s at Severalnines, so here is our list of Top 9 Facts (in no particular order) that made the trip to Santa Clara worthwhile once again for this year’s Percona Live Conference. Thanks to the team at Percona and everyone else involved in keeping the Santa Clara tradition going by organising another great conference this year.

1. The conference opened its arms not only to the “traditional” MySQL community, but also put a focus on MongoDB users.

This year in particular, there was a real intent to provide a place to learn and mingle for those database users who deal with not only one datastore, but manage a mixed database environment. More and more users are called to operate in polyglot database landscapes and thus it was good to see this year’s conference provide a platform for that. Percona themselves of course now serve both the MySQL and MongoDB user community with their tools and offerings, and companies like ourselves strive to help organisations with polyglot IT environments with our solutions and resources as well. So it was great to see a good mix of tutorial and talk topics as well as of sponsors at the conference.

2. Galera Cluster continues to be a popular topic in the MySQL universe

With plenty of talks and tutorials discussing Galera Cluster and how to make best use of it, the technology developed by the Codership team confirmed its growing popularity with MySQL users. We ourselves see a lot of interest in it and we blog / talk about Galera Cluster on a regular basis, so it was good to hear about the latest and greatest on it and talk to users directly about their clustering needs.

3. The Oracle MySQL Team is very present in the community

As per last year, it was good to see the Oracle MySQL Team so present at the conference, perhaps even more so than previously. Some great work has been done with MySQL 5.7 and it was good to hear about the MySQL Document Store. The MySQL community has been evolving over the years with its particular history, and it seems that there is a good balance now. We’re looking forward of course to see what the team have in store next for MySQL!

Facebook developed RocksDB by forking and improving LevelDB. The RocksDB storage engine is available for both MongoDB and MySQL. Many of the talks at the conference were about the ins- and outs of MongoRocks and MyRocks. We foresee a great future and adoption for this innovation by Facebook.

After Steve Wozniak last year, this year’s invited keynote speaker was Bill Nye. Bill is better known as The Science Guy and with his vision he gives a twist on tech and science. His keynote gave a lot of food for thought, but just in case you have missed it you can watch the recording here: https://www.youtube.com/watch?v=iQDrK3rEtWg

7. Did we mention that MongoDB was a big topic this year?

For everyone who’s been following Percona’s news, you’ll know that Percona is investing in MongoDB following their acquisition of Tokutek last year with the result of the new Percona Server for MongoDB. In addition to that, quite a few MongoDB related talks had been submitted (and accepted) for this year’s conference, which was good to see. One of them being our talk on how to manage MongoDB as a MySQL DBA. So while the prevalence of MongoDB as a topic might still seem unusual to those used to the MySQL user conference, it’s an interesting development that we’re keeping an eye on.

8. On a self-interested note: we hosted a ‘How to become a MySQL DBA’ tutorial this year!

Our colleagues Art van Scheppingen and Ashraf Sharif hosted a tutorial on ‘How to become a MySQL DBA’. It was great to spend the day with database enthusiasts who were keen to learn how to manage MySQL and share experiences with them. The tutorial was based on same-titled blog series, which has proven quite popular with our blog followers. Feel free to check it out.

We kind of have to part on that note: of course the conference is always a week to look forward to in the year, as it’s really the place where we get to see a lot of friends from past and present in the MySQL (and now MongoDB) community. It really is a grand tradition and it’s good to see that so many members of the community are to keen to continue to keep that going.

So here’s to seeing you all next year again! 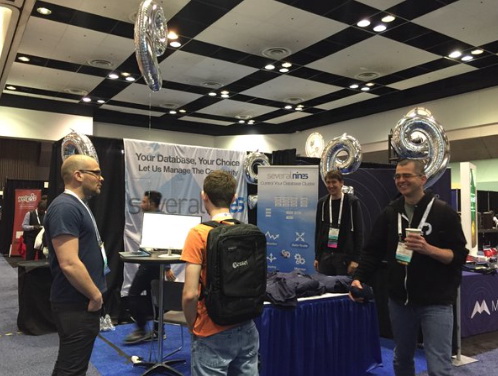