In the first part of the blog “An Overview of MongoDB Atlas,” we looked at getting started with MongoDB Atlas, the initial setup and migration of an existing MongoDB Cluster to MongoDB Atlas. In this part we are going to continue to explore several management elements required for every MongoDB production system, such as security and business continuity.

Security always comes first. While it is important for all databases, for MongoDB it has a special meaning. In mid 2017 the internet was full of news regarding ransomware attacks which specifically targeted vulnerabilities in MongoDB systems. Hackers were hijacking MongoDB instances and asking for a ransom in exchange for the return of the stored data. There were warnings. Prior to these ransomware attacks bloggers and experts wrote about how many production instances were found to be vulnerable. It stirred up vibrant discussion around MongoDB security for a long time after.

We are now in 2019 and MongoDB is getting even more popular. The new major version (4.0) was recently released, and we have seen increased stability in MongoDB Atlas. But what has been done to increase security for the NoSQL databases in the cloud.

The ransomware and constant press must have had an impact on MongoDB as we can clearly see that security is now at the center of the MongoDB ecosystem. MongoDB Atlas in no exception as it now comes with built-in security controls for production data processing needs and many enterprise security features out of the box. The default approach (which caused the vulnerability) from the older version is gone and the database is now secured by default (network, crud authorisations etc). It also comes with features you would expect to have in a modern production environment (auditing, temporary user access, etc).

But it doesn’t stop there. Since Atlas is an online solution you can now use integrations with third parties like LDAP authentication or modern MongoDB internet services like MongoDB charts. MongoDB Atlas is built atop of Amazon WebServices (AWS), Microsoft Azure, and Google Cloud Platform (GCP) which also offer high-security measures of their own. This great combination ensures MongoDB Atlas security standards are what we would expect. Let’s take a quick look at some of these key features.

MongoDB Atlas builds clusters on top of your existing cloud infrastructure. When one chooses AWS, the customer data is stored in MongoDB Atlas systems. These systems are single-tenant, dedicated, AWS EC2 virtual servers which are created solely for an Atlas Customer. Amazon AWS data centers are compliant with several physical security and information security standards, but since we need an open network, it can raise concerns.

MongoDB Atlas dedicated clusters are deployed in a Virtual Private Cloud (VPC) with dedicated firewalls. Access must be granted by an IP whitelist or through VPC Peering. By default all access is disabled.

The network ports cannot be changed and TLS cannot be disabled. Access can also be isolated by IP whitelist. 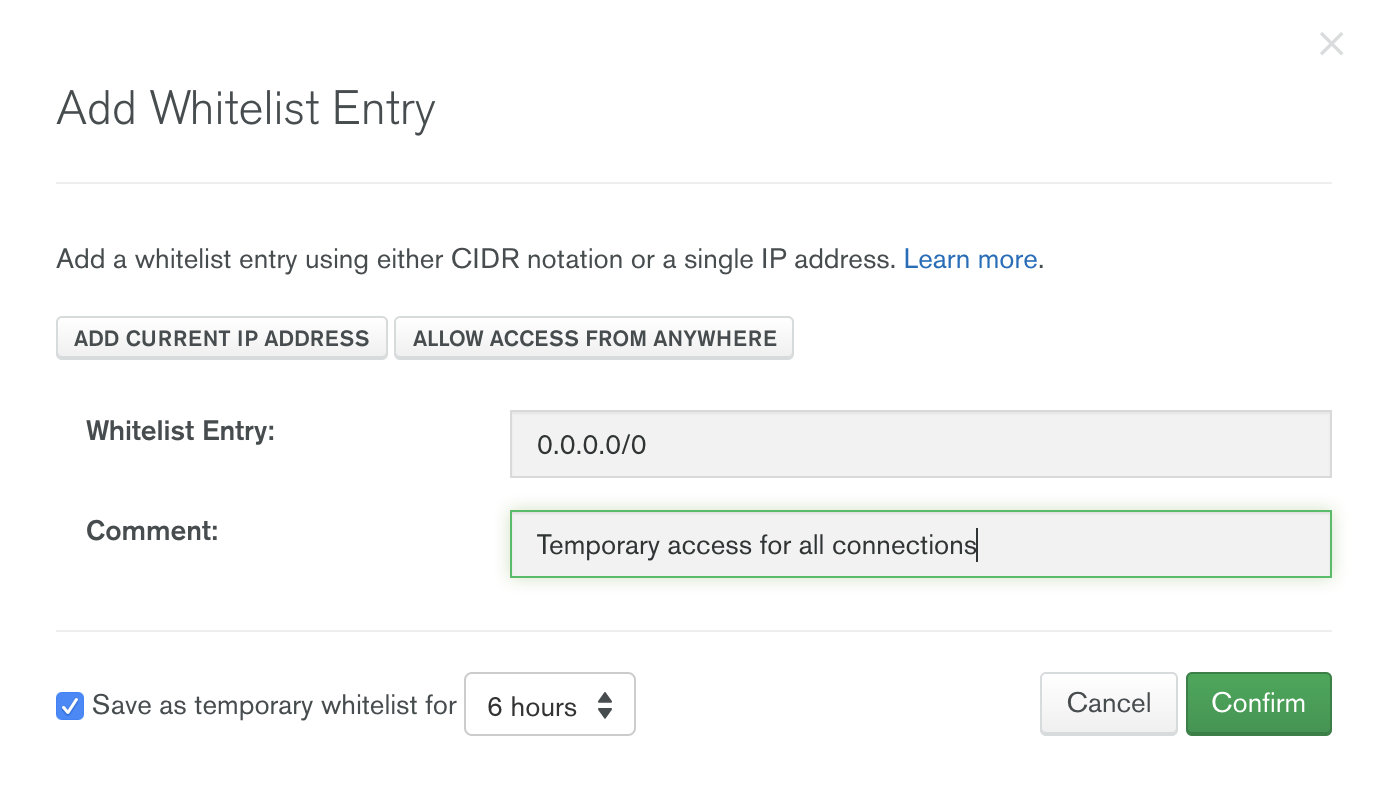 Additionally you can choose to access MongoDB Atlas via Bastion hosts. Bastion hosts are configured to require SSH keys (not passwords). They also require multi-factor authentication, and users must additionally be approved by senior management for backend access.

You can configure advanced, role-based access rules to control which users (and teams) can access, manipulate, and/or delete data in your databases. By default there are no users created so you will be prompted to create one.

MongoDB Atlas allows administrators to define permissions for a user or application as well as what data can be accessed when querying MongoDB. MongoDB Atlas provides the ability to provision users with roles specific to a project or database, making it possible to realize a separation of duties between different entities accessing and managing the data. The process is simple and fully interactive.

To create a new user go to the Security tab on the left side and choose between MongoDB users and MongoDB roles. 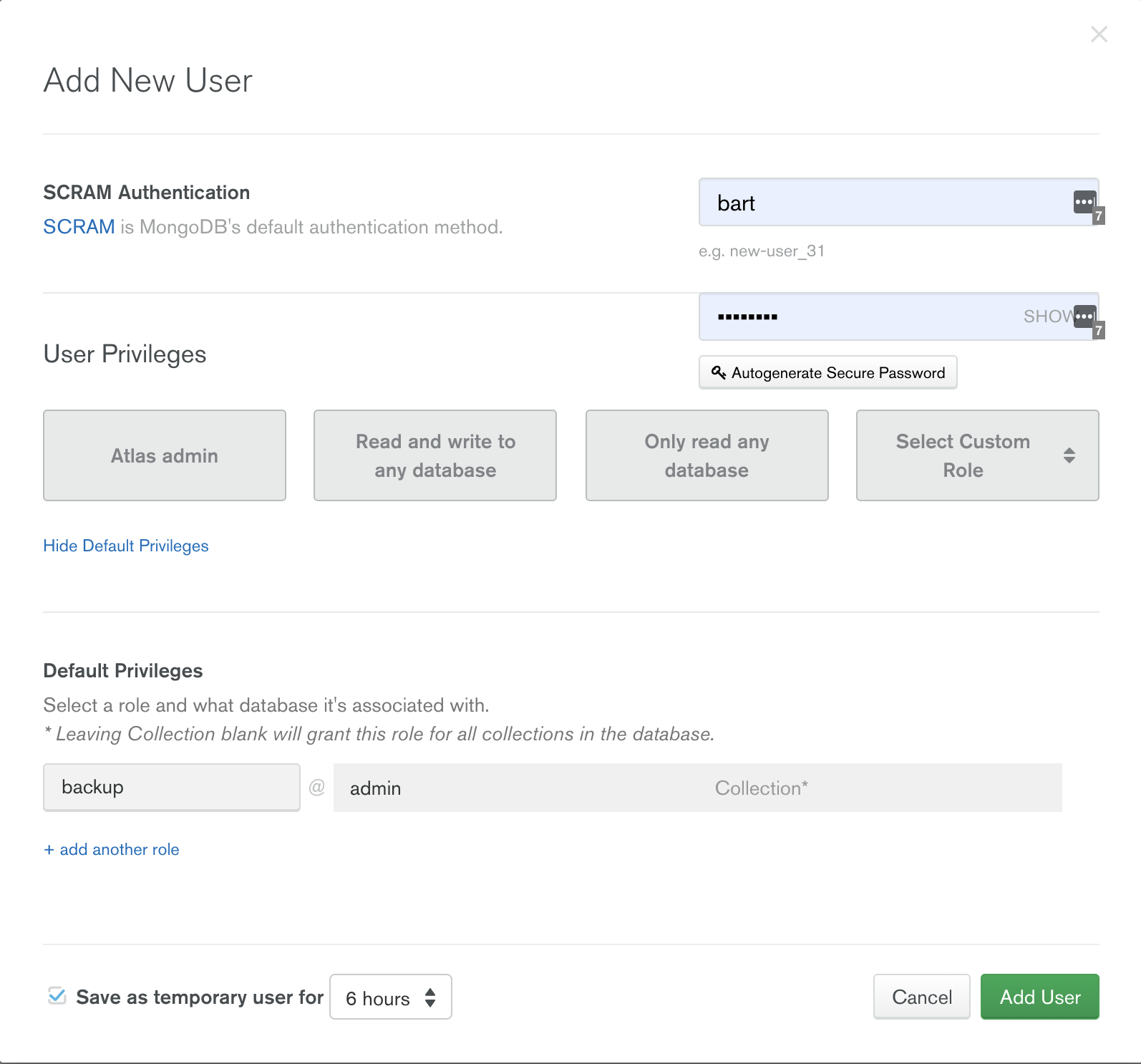 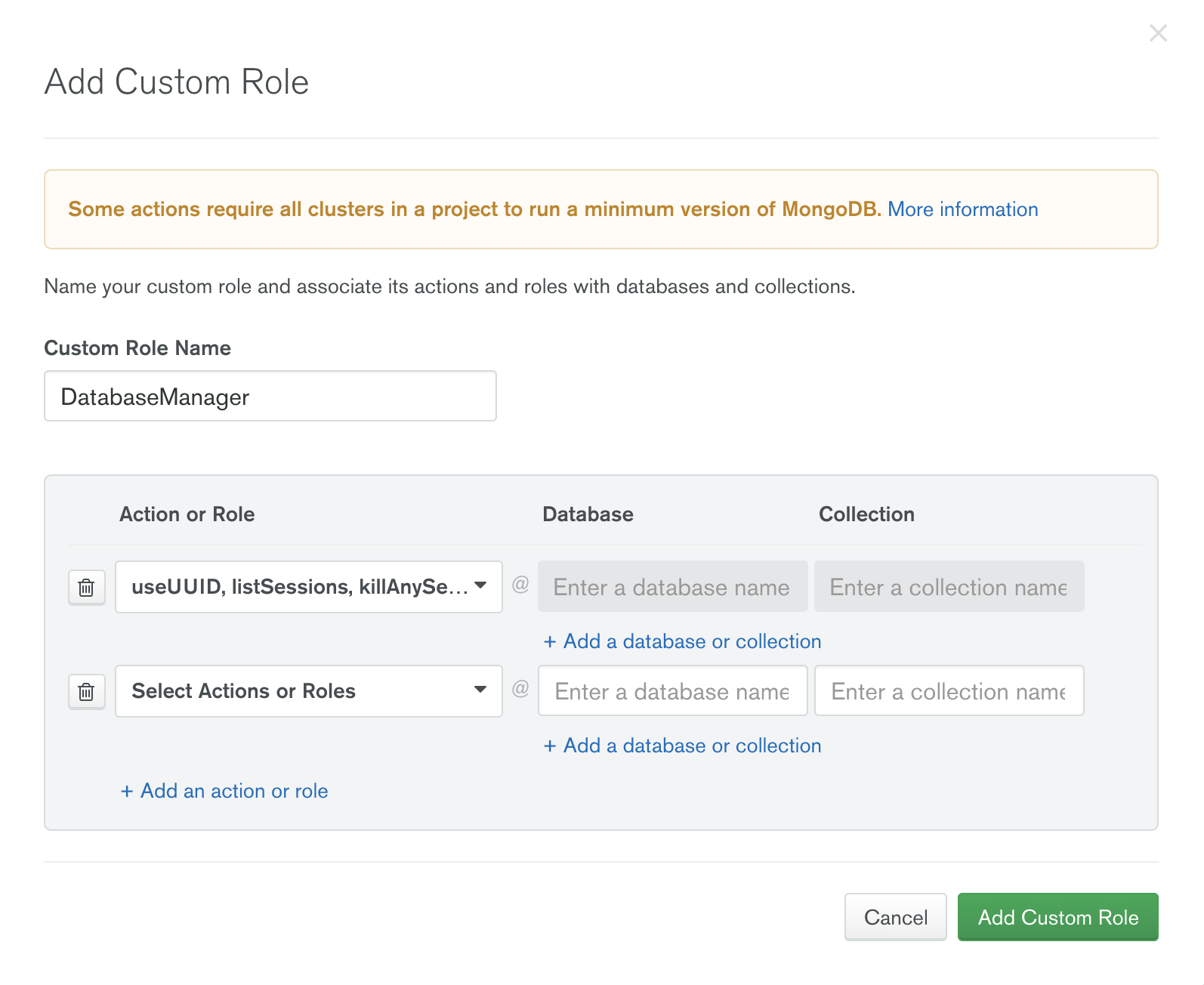 All the MongoDB Atlas data in transit is encrypted using Transport Layer Security (TLS). You have the flexibility to configure the minimum TLS protocol version. Encryption for data-at-rest is automated using encrypted storage volumes.

You can also integrate your existing security practices and processes with MongoDB Atlas to provide additional control over how you secure your environment.

For the MongoDB Atlas Cluster itself, authentication is automatically enabled by default via SCRAM to ensure a secure system out of the box.

With Encryption Key Management you can bring your own encryption keys to your dedicated clusters for an additional layer of encryption on the database files, including backup snapshots. 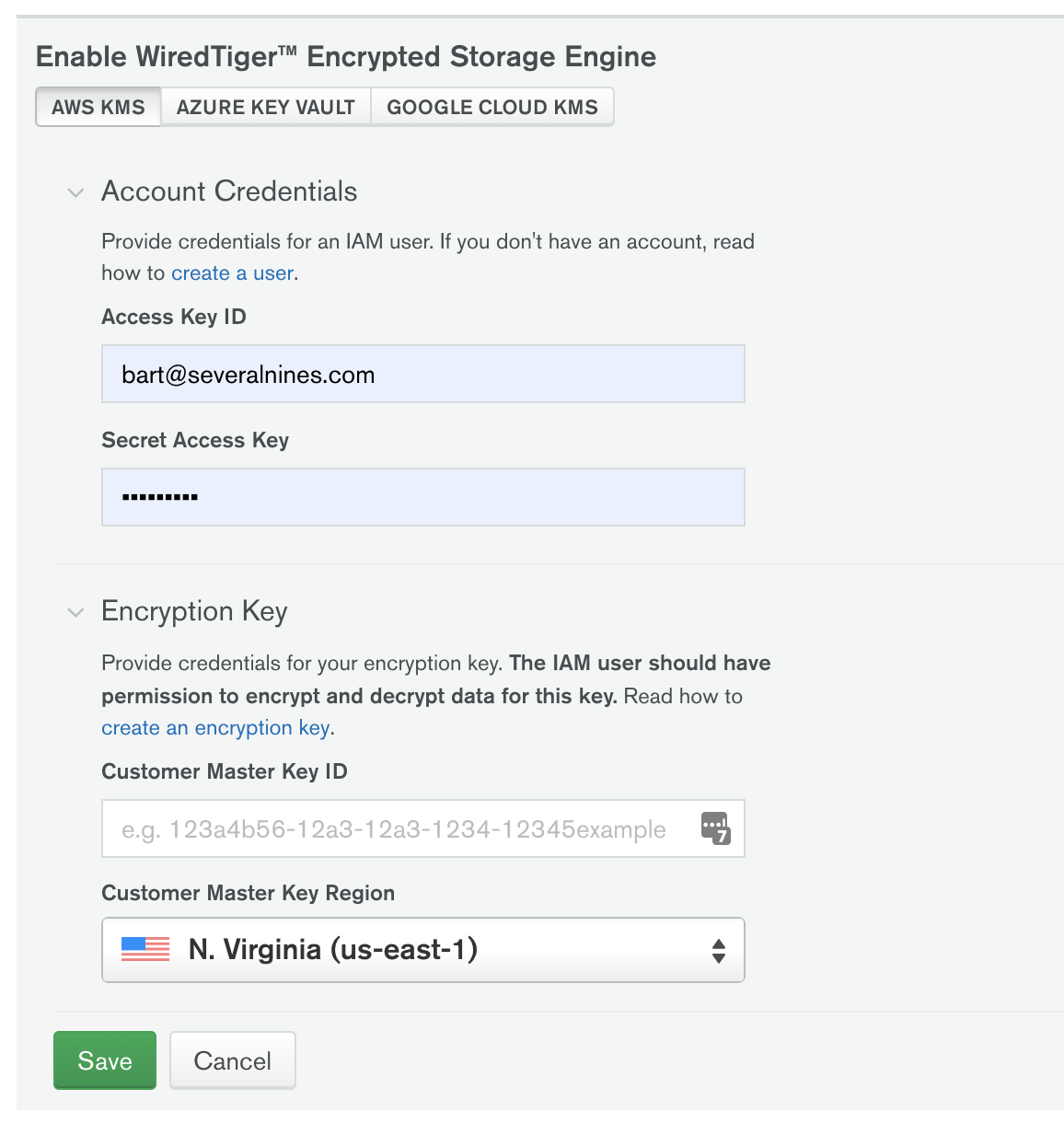 Granular database auditing answers detailed questions about system activity for deployments with multiple users by tracking all the commands against the database. Auditing in MongoDB is only available in MongoDB Enterprise. You can write audit events to the console, to the syslog, to a JSON file, or to a BSON file. You configure the audit option using the –auditDestination qualifier. For example, to send audit events as JSON events to syslog use…

MongoDB maintains a centralized log management system for collection, storage, and analysis of log data for production environments. This information can be used for health monitoring, troubleshooting, and for security purposes. Alerts are configured in the system in order to notify SREs of any operational concerns. 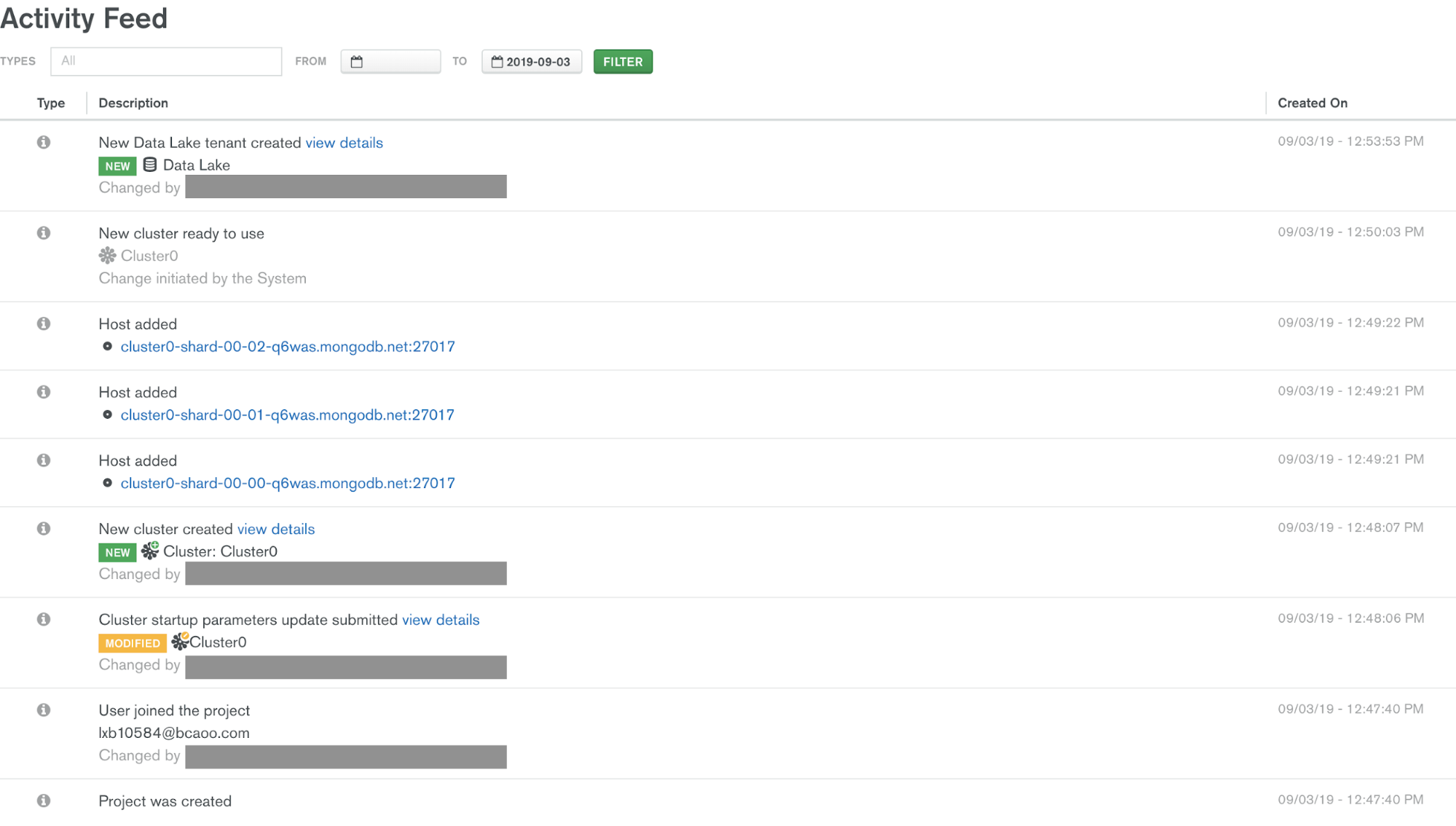 User authentication and authorization against MongoDB Atlas clusters can be managed via a customer’s Lightweight Directory Access Protocol (LDAP) server over TLS. A single LDAP configuration applies to all database clusters within an Atlas project. LDAP servers are used to simplify access control and make permissions management more granular.

For customers running their LDAP server in an AWS Virtual Private Cloud (VPC), a peering connection is recommended between that environment and the VPC containing their Atlas databases. 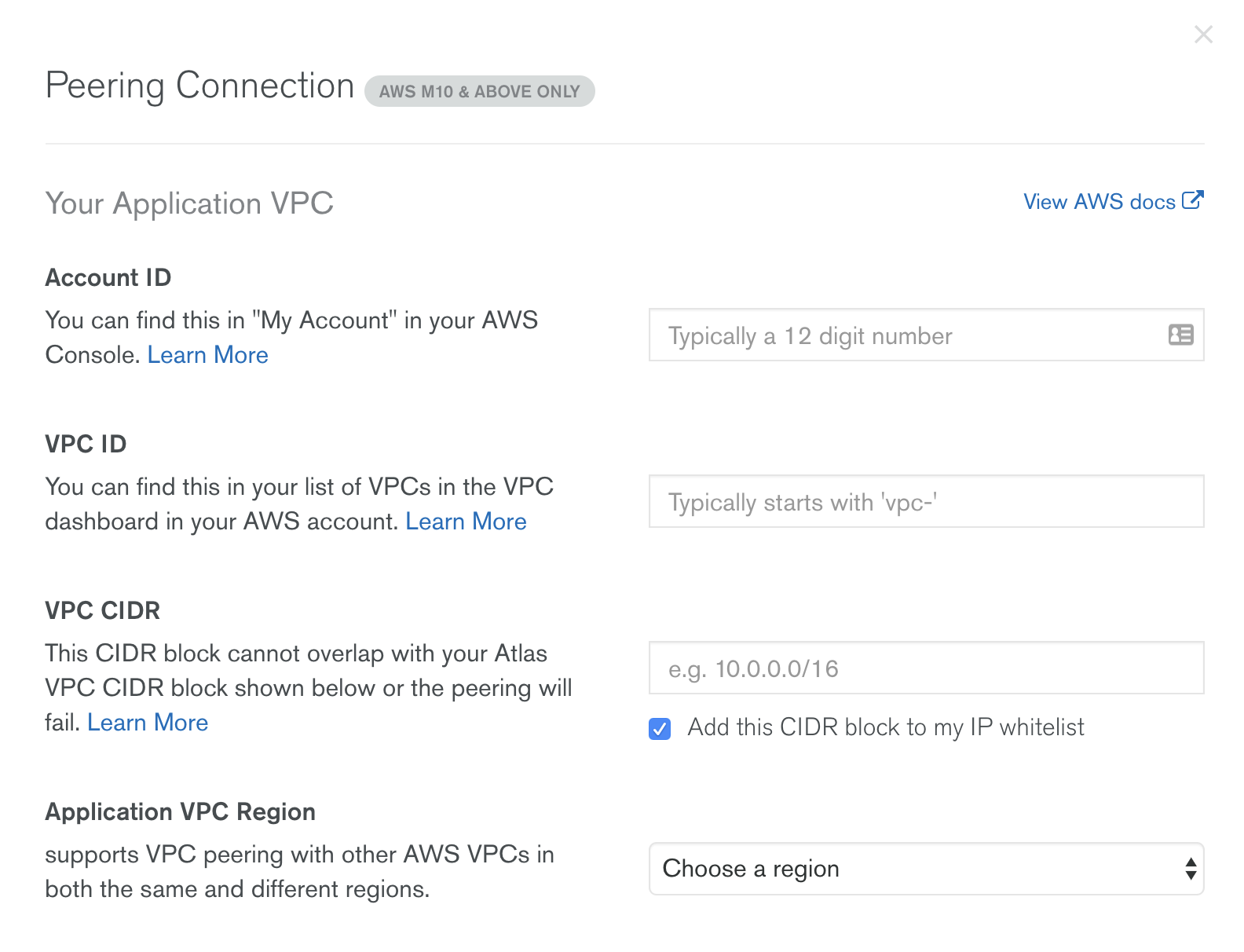 Backup data is protected using server-side encryption. Amazon S3 encrypts backed up data at the object level as it writes it to disks in its data centers and decrypts it for you when you restore it. All keys are fully managed by AWS.

Atlas offers the following methods to back up your data…

Continuous backups are available in M10+ Clusters and versions lower than server version 4.2. This is an old method of performing MongoDB backups. Atlas uses incremental snapshots to continuously back up your data. Continuous backup snapshots are typically just a few seconds behind the operational system. Atlas ensures point-in-time backup of replica sets and consistent, cluster-wide snapshots of sharded clusters on it’s own, which it uses S3 for.

When you create a Data Lake, you will grant Atlas read only access to S3 buckets in your AWS account and create a data configuration file that maps data from your S3 buckets to your MongoDB databases and collections. Atlas supports using any M10+ cluster, including Global Clusters, to connect to Data Lakes in the same. 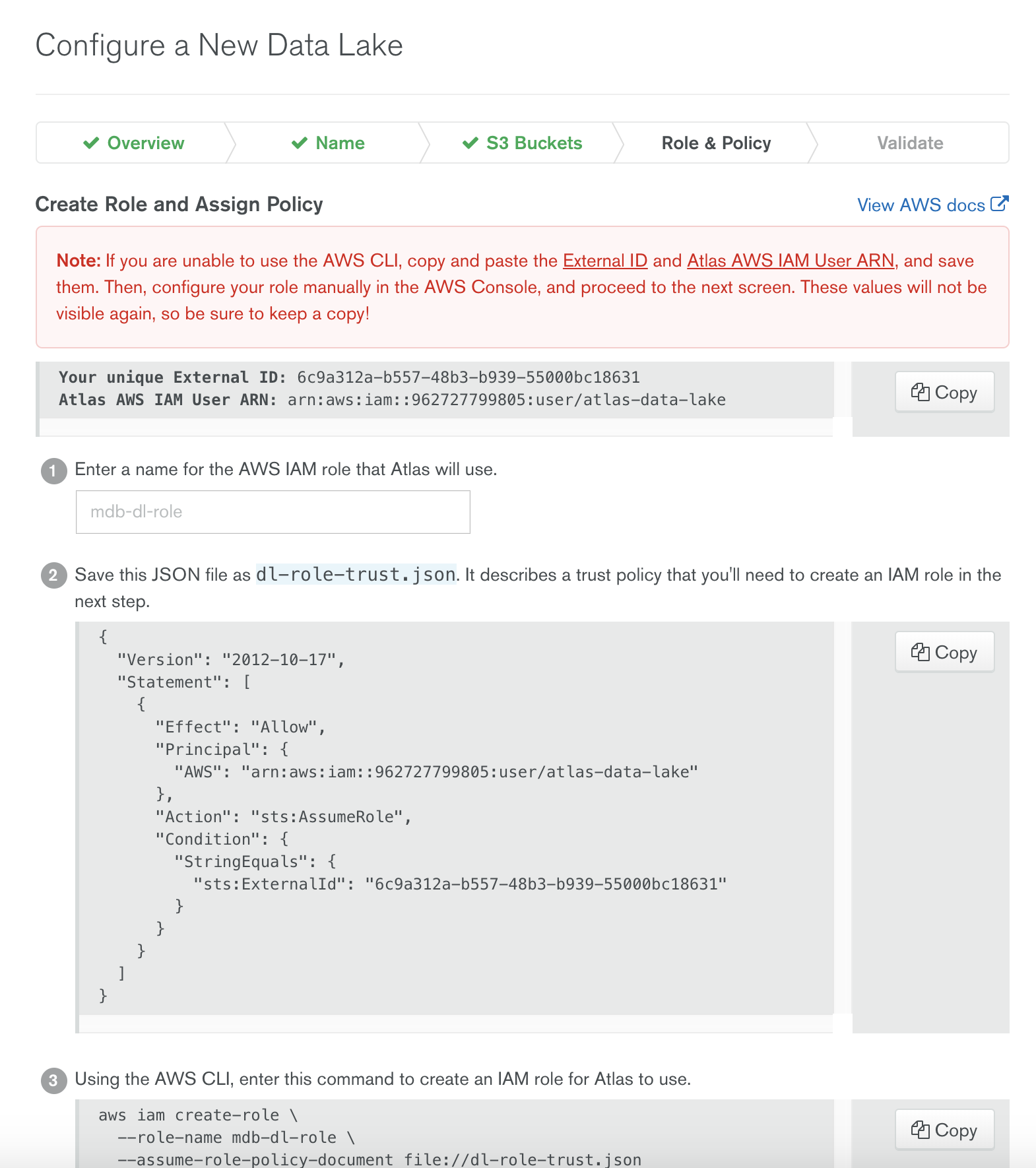 At the time of writing this blog following formats are supported.

That’s all for now, I hope you enjoyed my two part overview of MongoDB Atlas. Remember that ClusterControl also provides end-to-end management of MongoDB Clusters as well and is a great, lower-cost alternative to MongoDB Atlas which can also be deployed in the cloud.