Many would agree that having a graphical user interface is more efficient and less prone to human error when managing or administering a system. Graphical user interface (GUI) greatly helps reduce the steep learning curve required to get up to speed, especially if the software or system is new and complex to the end-user. For MySQL, the installer or packages only comes with a command line interface (CLI) out-of-the-box. However, there is a handful of softwares available in the market that provides a GUI including the one created by the MySQL team themselves called MySQL Workbench.

In this blog post, we are going to look into the graphical user interface aspects of MySQL Workbench and ClusterControl. Both tools have their own advantages and strengths, where some feature sets are overlapping since both tools support management, monitoring, and administration features to certain degrees.

MySQL Workbench is one of the most popular and free Graphical User Interface (GUI) tools to manage and administer a MySQL server. It is a unified visual tool built for database architects, developers, and DBAs. MySQL Workbench provides SQL development tools and data modeling, with comprehensive administration tools for server configuration, user administration, backup, and much more. It’s written in C++ and supports Windows, MacOS, Linux (Ubuntu, RHEL, Fedora) and also source code where you compile it by yourself.

MySQL Workbench assumes you have an already running MySQL server, and the user uses it as the graphical user interface to manage your MySQL server. You can perform most of the database management and administration tasks with Workbench like service control, configuration/user/session/connection/data management, as well as SQL development and data modelling. The management features have been covered in the previous blog posts of this series, Database User Management and Configuration Management.

In terms of monitoring, the Performance Dashboard provides quick views of MySQL performance on key server, network, and InnoDB metrics: 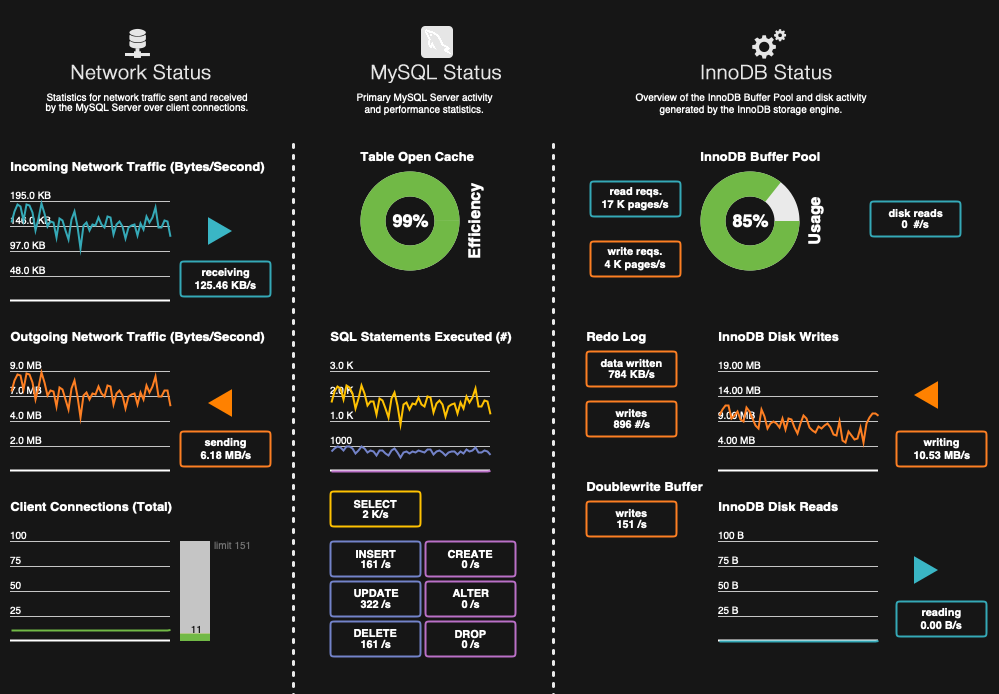 You can mouse over the various graphs and visuals to get more information about the sampled values, refreshed every 3 seconds. Note that Workbench does not store the sampling data anywhere thus the graphs are populated from the monitoring collected at the current time you access the dashboard until it is closed.

One of the MySQL Workbench strengths is its data modeling and design feature. It enables you to create models of your database schema graphically, reverse and forward engineer between a schema and a live database, and edit all aspects of your database using the comprehensive editor. The following screenshot shows the entity-relationship (ER) diagram built and visualized with Workbench of Sakila sample database: 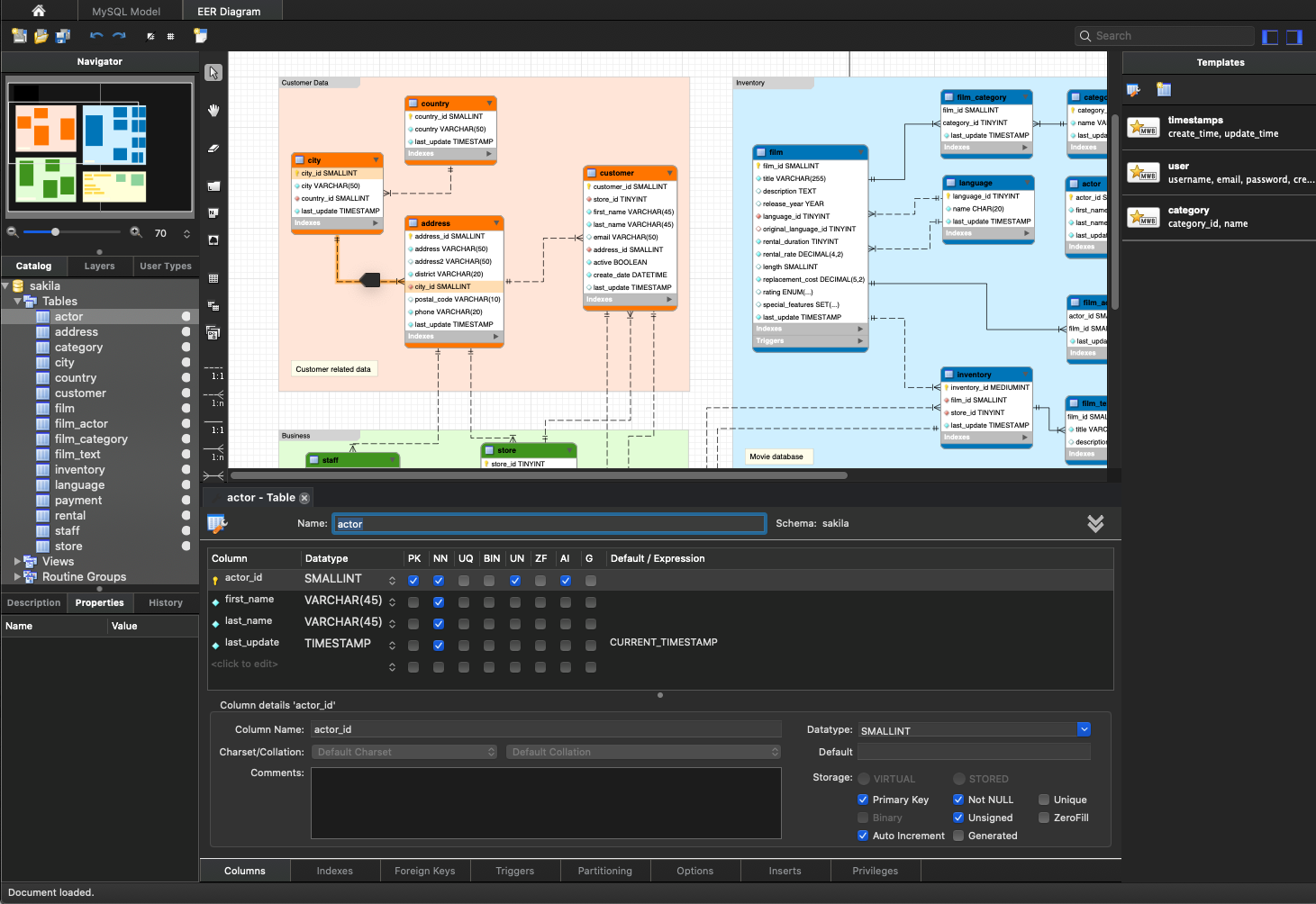 Another notable feature is database migration wizard, which allows you to migrate tables and data from a supported database system like Microsoft SQL Server, Microsoft Access, PostgreSQL, Sybase ASE, Sybase SQL Anywhere and SQLite to MySQL:

This tool can save DBA and developer time with its visual, point and click ease of use around all phases of configuring and managing a complex migration process. This migration wizard can also be used to copy databases from one MySQL server to another and also to upgrade to the latest version of MySQL using logical upgrade.

ClusterControl comes with two user interfaces – GUI and CLI. The graphical user interface, also known as ClusterControl UI is built on top of LAMP stack technologies. Thus, it requires extra steps to prepare, install and configure all the dependencies for a MySQL database server, Apache web server and PHP. To make sure all dependencies are met and configured correctly, it’s recommended to install ClusterControl on a clean fresh host using the installer script available on the website.

Once installed, open your preferred web browser and go to http://ClusterControl_server_IP_address/clustercontrol and start creating the admin user and password. The next step is to either deploy a new database cluster or import an existing database cluster into it.

ClusterControl groups database servers per cluster, even for standalone database nodes. It focuses more on the low-level system administration responsibility on automation, management, monitoring and scaling of your database servers and clusters. One of the cool GUI features is cluster topology visualization, which gives us a high-level look on how the current database architecture looks like, including the load-balancer tier:

The Topology view provides a real-time summary of the cluster/node state, replication data flow and the relationship among members in the cluster. You might know for MySQL replication, the database role and replication flow is very critical, especially after a topology changes event like master failure, slave promotion or switchover happened.

ClusterControl provides many step-by-step wizards to help users to deploy, manage and configure their database servers. Most of the difficult and complex tasks are configurable via this wizard like deploying a cluster, importing a cluster, adding a new database node, deploying a load balancer, scheduling a backup, restoring a backup and performing backup verification. For example, if you would like to schedule a backup, there are different steps involved depending on the chosen backup method, the chosen backup destination and many other variables. The UI will dynamically get updated according to the chosen options, as highlighted by the following schedule backup screenshot: 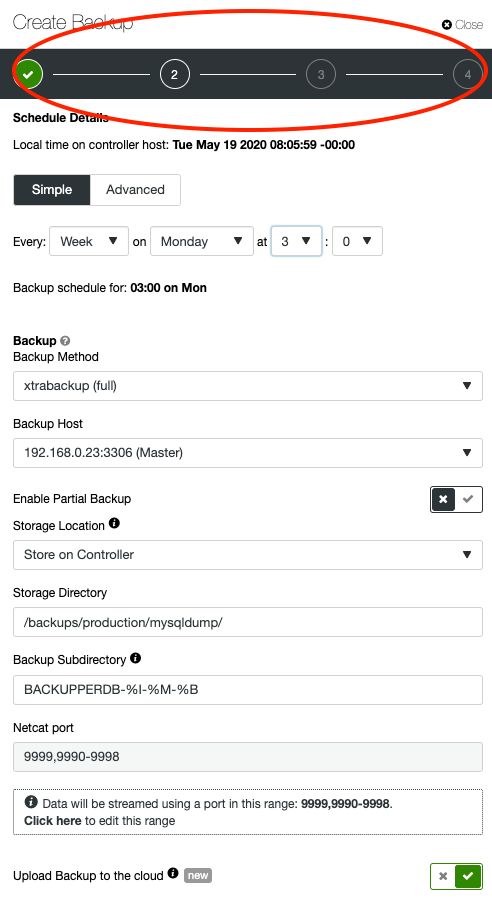 In the above screenshot, we can tell that there are 4 major steps to schedule this kind of backup based on the inputs specified in the first (pick whether to create or schedule a backup) and the second step (this page). The third step is about configuring xtrabackup (the chosen backup method on this page), the last step is about configuring the backup destination to cloud (the chosen backup destination on this page). Configuring advanced settings is really not an obstacle using ClusterControl. If you are unsure about all of the advanced options, just accept the default values which commonly suit general purpose backups.

Although the graphical interface is a web-based application, all monitoring and trending components like graphs, histograms, status and variable grids are updated in real-time with customizable range and refresh rate settings to suit your monitoring needs: 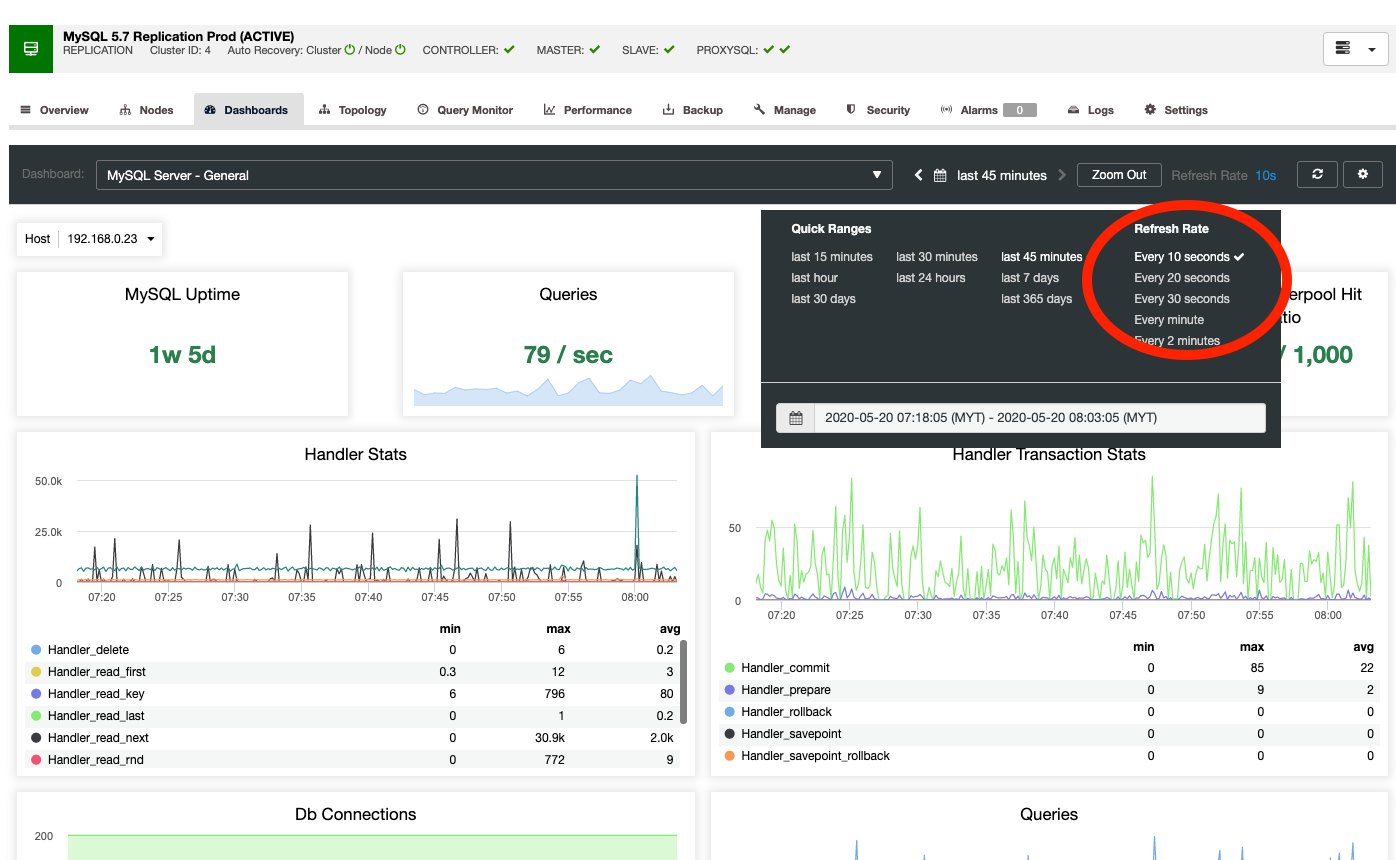 MySQL Workbench is relatively easy to install with no dependencies running as a standalone application. It has all the necessary features to manage and administer database objects required for your application. It is free and open source and backed by the team who maintains the MySQL server itself. New MySQL features are usually first supported by MySQL Workbench before the masses adopt it.

On the downside, MySQL Workbench does not support mobile or tablet versions. However, there are other comparable tools available on the respective apps store. The performance monitoring features for MySQL Workbench are useful (albeit simple) highlighting only the common metrics plus the monitoring data is not stored for future reference.

The ClusterControl GUI is a web-based application which is accessible from all devices that can run the supported web browsers whether it’s on a normal PC, laptop, smartphones or tablets. It supports managing multiple database vendors, systems and versions and it stores all monitoring data in its database which can be used to track past events with proactive alerting capabilities. In terms of management, ClusterControl offers a basic schema and user management, but far superior for other advanced management features like configuration, automatic recovery, switchover, replication, node scaling, and load balancer management.

On the drawbacks, ClusterControl is dependent on a number of software programs to work smoothly. These include a properly tuned MySQL server, Apache web server, and also PHP modules. It also requires regular software updates to keep up with all the changes introduced by many vendors it supports. ClusterControl end-user targets are Sysadmins and DevOps, therefore it does not have many GUI features to manage the database objects (tables, views, routines, etc) and SQL development like SQL editor, highlighter and formatter.

The following table compares some of the notable graphical user interface features on both tools: