What is Zero Trust?

Today’s cloud environments are generally predicated on the use of public, or rather, untrusted networks. In such untrusted networks, the application of security models that have been used in traditional perimeter networks just doesn’t fit. Traditional on-premise networks have, for a long time, been based on perimeter-based security; where access outside “the perimeter” is only granted to trusted devices such as a corporate-issued device that has been hardened, installed with endpoint protections like anti-malware and has access allowed only via a Virtual Private Network (VPN). Essentially, these are devices that adhere to pre-defined organizational policies and enforcements. Much has changed if you think about it. More and more organizations have had to deal with Bring Your Own Device (BYOD) where you have people using mobile devices, tablets, laptops, or any kind of device that doesn’t subscribe to pre-defined organizational policies. Also, those devices have applications that should not be trusted either.

In such kind of network environments, the best way to protect your cloud services, as we shall see, is to begin by trusting nothing. That is, by assuming every application and device in your network is compromised and further putting mechanisms in your network to get an assurance of what can be trusted and what isn’t. That is the general idea about Zero Trust.

How to Develop Trust

The control plane should be able to:

There are technologies that are well suited for implementing Zero Trust architectures. Such technologies and security concepts will be discussed in the section below.

Identity-Aware proxies keep getting adopted as a means to achieve Zero Trust and as an alternative to traditional VPN. Ideally, for a user, application, or device to connect to a set of protected cloud services, they have to access the cloud services via the Identity-Aware Proxy. Cloud vendors like Cloudflare, Google Cloud, and Azure already have such a feature.

Most Identity-Aware proxies are normally a mashup of the following:

Identity-Aware proxies are a good way to implement Zero Trust as they fall in line with the philosophy of sufficiently identifying users, applications, and devices and imposing policies before access is allowed to a set of protected assets. 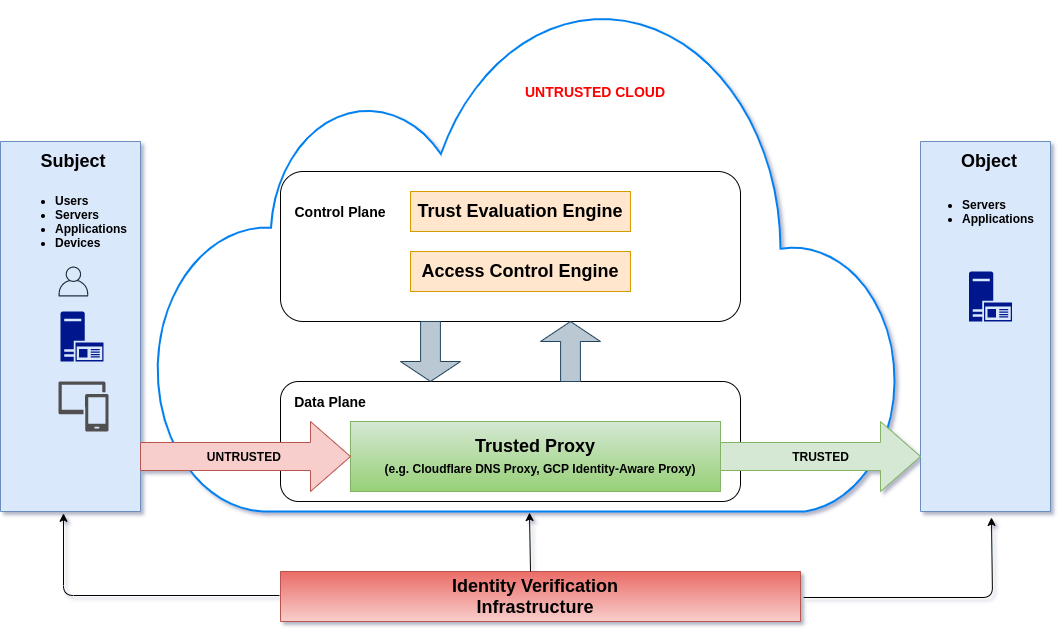 Network segmentation helps reinforce Zero Trust by denying access to a set of assets that desire to be protected in untrusted networks. The use of network segmentation in the cloud is naturally a complement to the use of Identity-Aware Proxies as it ensures that access is only allowed by a user, application, or device that has its identity vetted by the Identity-Aware proxy or similar policy-based engine.

It’s one thing to authenticate a user once, and it’s another to verify how authentic their identity is. Generally, the authenticity of the identity is usually verified by observing different attributes that help affirm the identity of the user, application, or device. Such attributes could be:

MFA can also be coupled with constraints such as time and location which help affirm the legitimacy of the identity.

It’s hard to separate Public Key Infrastructure (PKI) from the concept of Zero Trust. The reason being, PKI has for a long time been designed and associated with ensuring there is trusted communication between different subjects/network components. Aside from the other concepts and technologies described above, using PKI is indeed a bonus in ensuring communication between various applications and devices is trusted. PKI can be used to verify the authenticity of users, applications, and devices.

More so, the use of private PKI with mutual authentication is ideal. Using a private PKI setup gives you control of what can be trusted. Unlike private PKI setups, public PKI reduces the level of trust since you have to rely on a third-party to issue certificates to different parties; that is, users, applications, and devices. You may not entirely be sure about the integrity of the Certificate Authority (CA). Mutual authentication requires two subjects (users or applications or devices) to establish trust before exchanging data/communications. 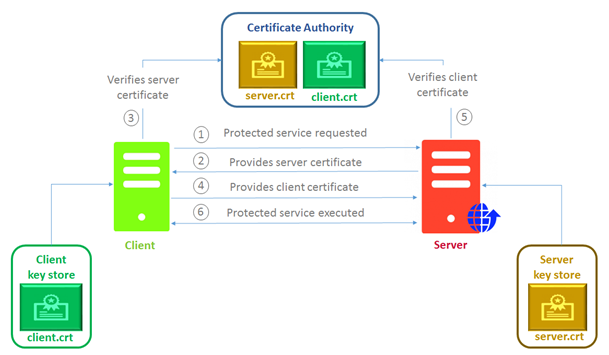 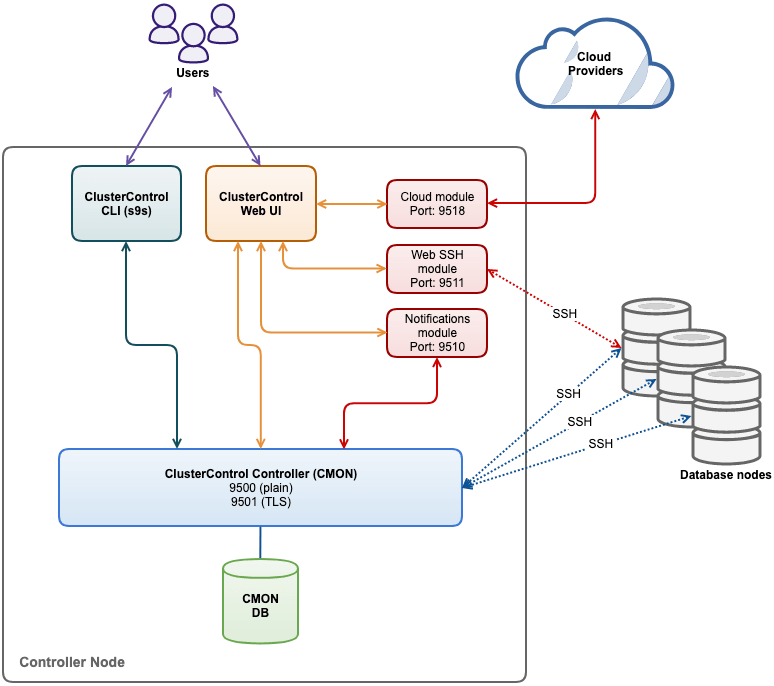 ClusterControl exposes some modules that are good candidates for integrating Zero Trust technologies. Usually, users can directly access the ClusterControl CLI and Cluster Control Web UI, as shown above. The direct access can be secured by simply placing ClusterControl CLI and Cluster Control Web UI behind an Identity-Aware Proxy as shown in the diagram below. That way, you get to ensure only trusted users can access those administrative modules. 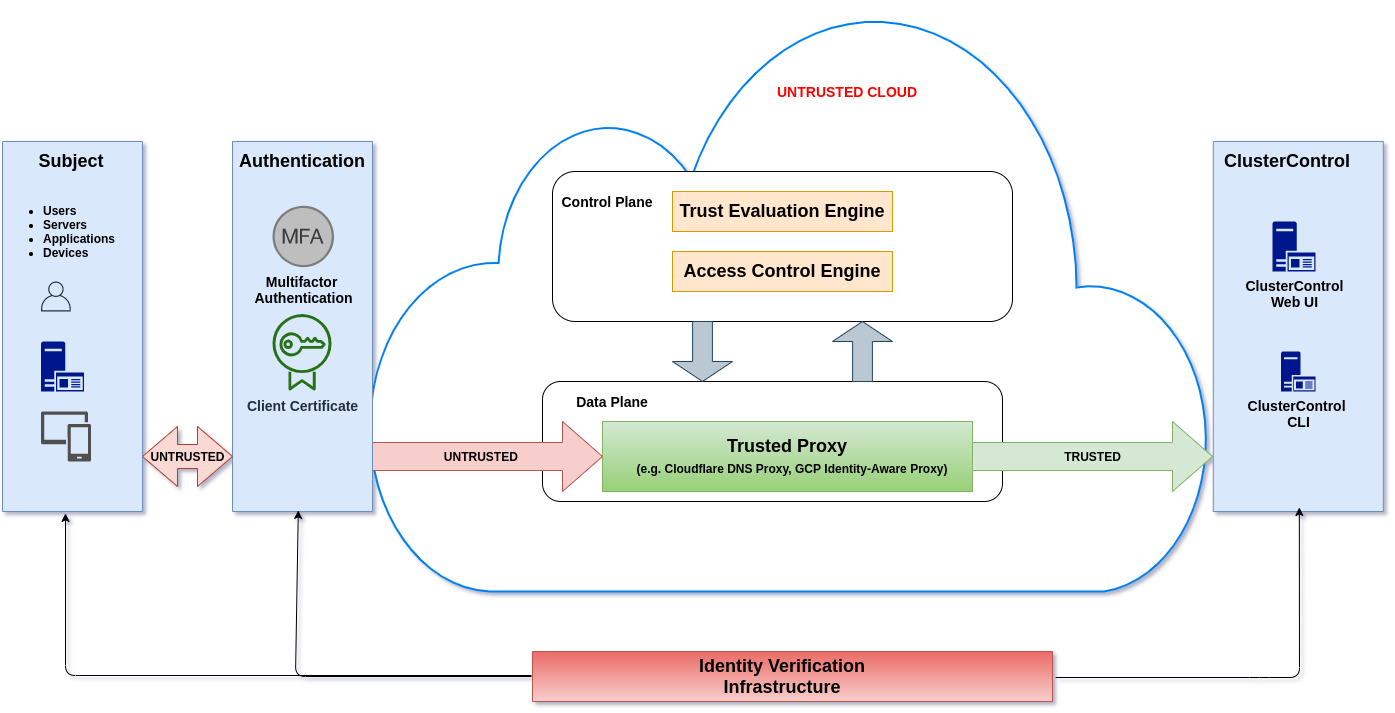 As more and more businesses adopt the public cloud, they need to rethink how they can secure assets in that space. Adopting the Zero Trust philosophy helps rethink how you can secure servers such as ClusterControl in an untrusted network.