Ansible automates and simplifies repetitive, complex, and tedious operations. It is an IT automation engine that automates cloud provisioning, configuration management, application deployment, intra-service orchestration, and many other IT needs. It requires no agents, using only SSH to push changes from a single source to multiple remote resources with no additional custom security infrastructure configuration and use a simple language format (YAML) to describe the automation jobs.

Installing a standalone MySQL server is a simple straightforward task, but this can be problematic if you have multiple database servers, versions, platforms and environments to support. Thus, having a configuration management tool is the way to go to improve efficiency, remove repetitiveness and reduce human errors.

In this blog post, we are going to go walk you through the basics of Ansible’s automation for MySQL, as well as configuration management with examples and explanations. We will start with a simple standalone MySQL deployment, as illustrated in the following high-level diagram: 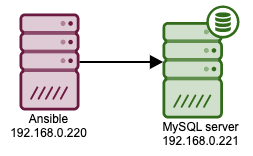 For this walkthrough, we need to have at least two hosts – One host is for Ansible (you could use a workstation instead of a server) and another one is the target host that we want to deploy a MySQL server.

To install Ansible on CentOS 7, simply run the following commands:

For other OS distributions, check out the Ansible installation guide.

Using password during SSH is supported, but passwordless SSH keys with ssh-agent are one of the best ways to use Ansible. The initial step is to configure passwordless SSH since Ansible will perform the deployment solely by this channel. Firstly, generate a SSH key on the Ansible host:

You should get at least the following files generated:

To allow passwordless SSH, we need to copy the SSH public key (id_rsa.pub) to the remote host that we want to access. We can use a tool called ssh-copy-id to do this task for us. However, you must know the user’s password of the target host and the password authentication is allowed on the target host:

The above command will prompt out for root password of 192.168.0.221, simply enter the password and the SSH key for the current user of the Ansible host will be copied over to the target host, 192.168.0.221 into ~/.ssh/authorized_keys, meaning we authorize that particular key to access this server remotely. To test out, you should be able to run the following remote command without any password from Ansible host:

In case where you are not allowed to use root user for SSH (e.g, “PermitRootLogin no” in SSH configuration), you can use a sudo user instead. In the following example, we set up passwordless SSH for a sudo user called “vagrant”:

If the target server doesn’t allow password authentication via SSH, simply copy the content of SSH public key at ~/.ssh/id_rsa.pub manually into the target hosts’ ~/.ssh/authorized_keys file. For example, on the Ansible host, retrieve the public key content:

Connect to the target host and paste the Ansible’s host public key into ~/.ssh/authorized_keys:

You may now try to run a remote command from Ansible host to verify and you should not be prompted with any password. At this point, our passwordless SSH is configured.

Next we need to define the target host, the host that we want to manage using Ansible. Based on our architecture, we are going to deploy only one MySQL server which is 192.168.0.221. Add the following lines into /etc/ansible/hosts:

The above simply means we defined a group called “db-mysql”, which will be the identifier when we refer to the target host in Ansible playbook. We can also list out all IP addresses or hostnames of the target hosts under this group. At this point, we only have one MySQL server to deploy, thus only one entry is there. You can also specify a any matching rule to match the hosts under one group, for example:

The above definition means we are having 3 hosts under this very group with the following IP addresses:

There are a lot of ways and rules to match and group the target hosts as shown in the Ansible inventory guide.

To tell Ansible what to deploy, we need to define the deployment steps in a YML formatted file called playbook. As you might know, installing a complete MySQL server requires multiple steps to satisfy all MySQL dependencies, post-installation configuration, user and schema creation and so on. Ansible has provided a number of MySQL modules that can help us out, but still we have to write a playbook for the deployment steps.

To simplify the deployment steps, we can use existing Ansible roles. Ansible role is an independent component which allows reuse of common configuration steps. An Ansible role has to be used within the playbook. There are a number of MySQL Ansible roles available in the Ansible Galaxy, a repository for Ansible roles that are available to drop directly into your playbooks.

If you lookup “mysql”, you will get plenty of Ansible roles for MySQL: 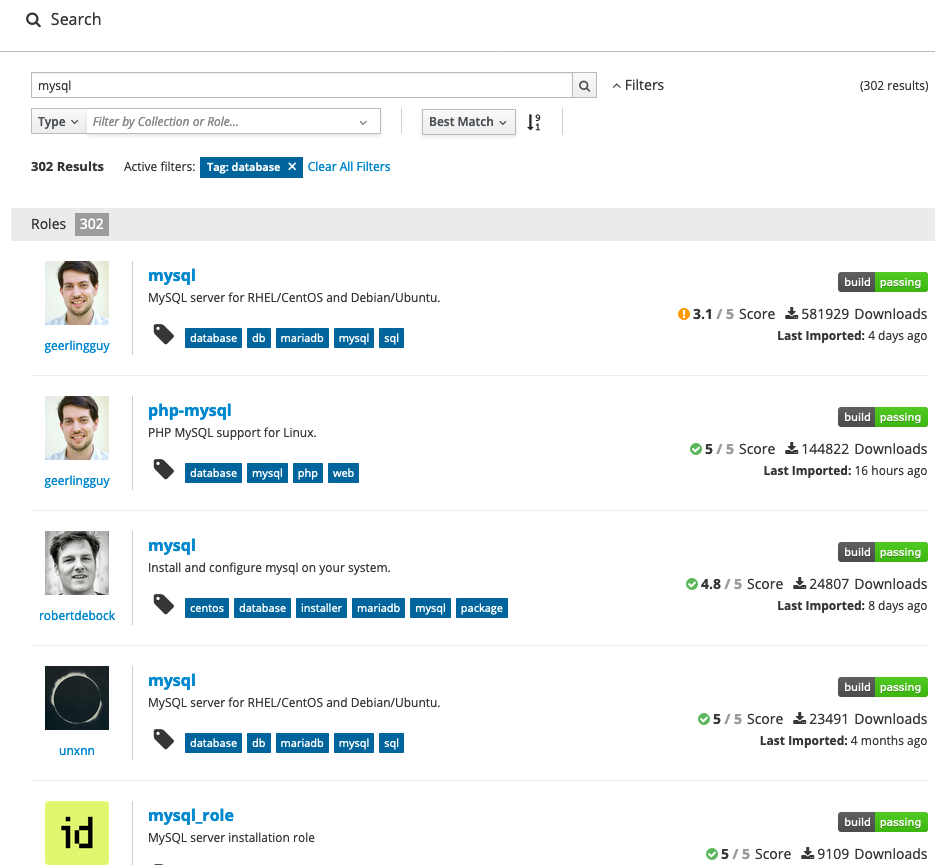 We will use the most popular one named “mysql” by geerlingguy. You can opt to use other roles but mostly the most downloaded one tends to be for general purpose which usually works fine in most cases.

The role will be downloaded into ~/.ansible/roles/geerlingguy.mysql/ of the current user.

By looking at the Readme of the Ansible role, we can follow the example playbook that is being provided. Firstly, create a playbook file called deploy-mysql.yml and add the following lines:

In the above lines, we define the target host which is all hosts under db-mysql entries in /etc/ansible/hosts. The next line (become) tells Ansible to execute the playbook as a root user, which is necessary for the role (it is stated there in the Readme file). Next, we define the location of variables file (var_files) located at vars/main.yml, relative to the playbook path.

Let’s create the variable directory and file and specify the following line:

For more information check out the Role Variables section in the Readme file of this role.

Now we are ready to start the MySQL deployment. Use the ansible-playbook command to execute our playbook definitions:

You should see a bunch of lines appear in the output. Focus on the last line where it summarizes the deployment:

If everything turns up green and OK, you can verify on the database host that our MySQL server is already installed and running:

As you can see from the above, for CentOS 7, the default MySQL installation is MariaDB 5.5 as part of the standard package repository. At this point, our deployment is considered complete, however, we would like to further customize our deployment as shown in the next sections.

The simplest definition in playbook gives us a very basic installation and uses all default configuration options. We can further customize the MySQL installation by extending/modifying/appending the playbook to do the following:

By default, the role will install the default MySQL package that comes with the OS distribution. As for CentOS 7, you would get MariaDB 5.5 installed by default. Suppose we want to install MySQL from another vendor, we can extend the playbook with pre_tasks, a task which Ansible executes before executing any tasks mentioned in any .yml file, as shown in the following example:

The above will install MySQL from Oracle repository instead. The default version you would get is MySQL 5.6. Executing the above playbook on a target host that already has a running older version of MySQL/MariaDB would likely fail because of the incompatibility.

Inside vars/main.yml, we can define the MySQL database and users that we want Ansible to configure on our MySQL server by using the mysql_database and mysql_users modules, right after our previous definition on mysql_root_password:

Re-execute the playbook to apply the change into our MySQL server:

This time, Ansible will pick up all the changes we made in vars/main.yml to be applied to our MySQL server. We can verify in the MySQL server with the following commands:

This role supports enabling MySQL slow query log, we can define the location of the log file as well as the slow query time. Add the necessary variables inside vars/main.yml file:

Re-run the playbook to apply the changes:

If the generated configuration does not satisfy our MySQL requirement, we can include custom MySQL configuration files into the deployment by using mysql_config_include_files variable. It accepts an array of values separated by a comma, with a “src” as the prefix for the actual path on the Ansible host.

To import these configuration files into our deployment, define them in the mysql_config_include_files array in vars/main.yml file:

Ansible can be used to automate the database deployment and configuration management with a little knowledge of scripting. Meanwhile, ClusterControl uses a similar passwordless SSH approach to deploy, monitor, manage and scale your database cluster from A to Z, with a user interface and needs no additional skill to achieve the same result.