Security is one of the most important aspects of running a database. Whether you are a developer or a DBA, if you are managing the database, it is your responsibility to safeguard your data and protect it from any kind of unauthorized access. The unfortunate fact is that many organizations do not protect their data, as we’ve seen from the new wave of MongoDB ransomware attacks in September 2017. We had earlier published a blog on how to secure MongoDB databases.

In this blog post, we’ll have a look into how to secure your databases using ClusterControl. All of the features described here are available in version 1.5.1 of ClusterControl (released on December 23, 2017). Please note that some features are only available for certain database types.

ClusterControl 1.5.1 introduced a new feature called backup encryption. All encrypted backups are marked with a lock icon next to it:

You can use this feature on all backup methods (mysqldump, xtrabackup, mongodump, pg_dump) supported by ClusterControl. To enable encryption, simply toggle on the “Enable Encryption” switch when scheduling or creating the backup. ClusterControl automatically generates a key to encrypt the backup. It uses AES-256 (CBC) encryption algorithm and performs the encryption on-the-fly on the target server. The following command shows an example of how ClusterControl performs a mysqldump backup:

You would see the following error if you tried to decompress an encrypted backup without decrypting it first with the proper key:

The key is stored inside the ClusterControl database, and can be retrieved from the cmon_backup.metadata file for a particular backup set. It will be used by ClusterControl when performing restoration. Encrypting backups is highly recommended, especially when you want to secure your backups offsite like archiving them in the cloud.

Apart from following the recommended security steps during deployment, you can increase the reliability of your database service by using client-server SSL encryption. Using ClusterControl, you can perform this operation with simple point and click: 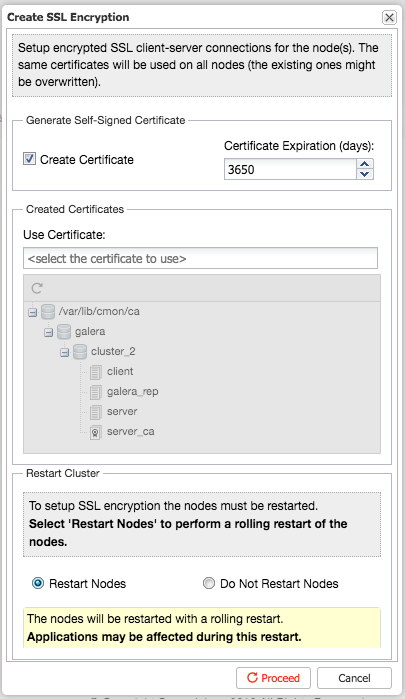 Replication traffic within a Galera Cluster can be enabled with just one click. ClusterControl uses a 2048-bit default key and certificate generated on the ClusterControl node, which is transferred to all the Galera nodes: 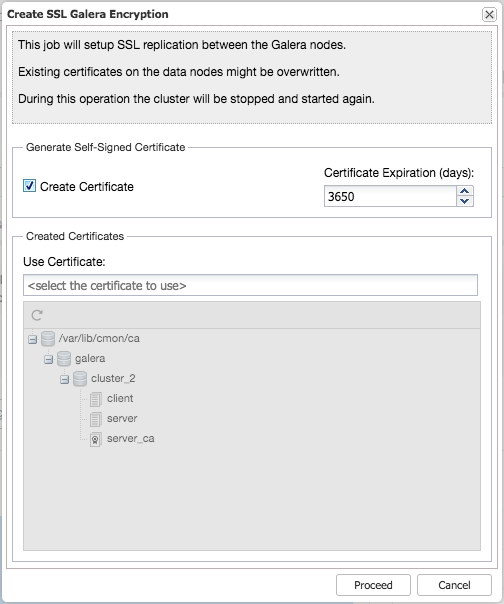 A cluster restart is necessary. ClusterControl will perform a rolling restart operation, taking one node at a time. You will see a green lock icon next to the database server (Galera indicates Galera Replication encryption, while SSL indicates client-server encryption) in the Hosts grid of the Overview page once encryption is enabled:

All the keys and certificates can be managed directly under Key Management, as described further down.

All the generated keys and certificates can be managed directly from the ClusterControl UI. Key Management allows you to manage SSL certificates and keys that can be provisioned on your clusters: 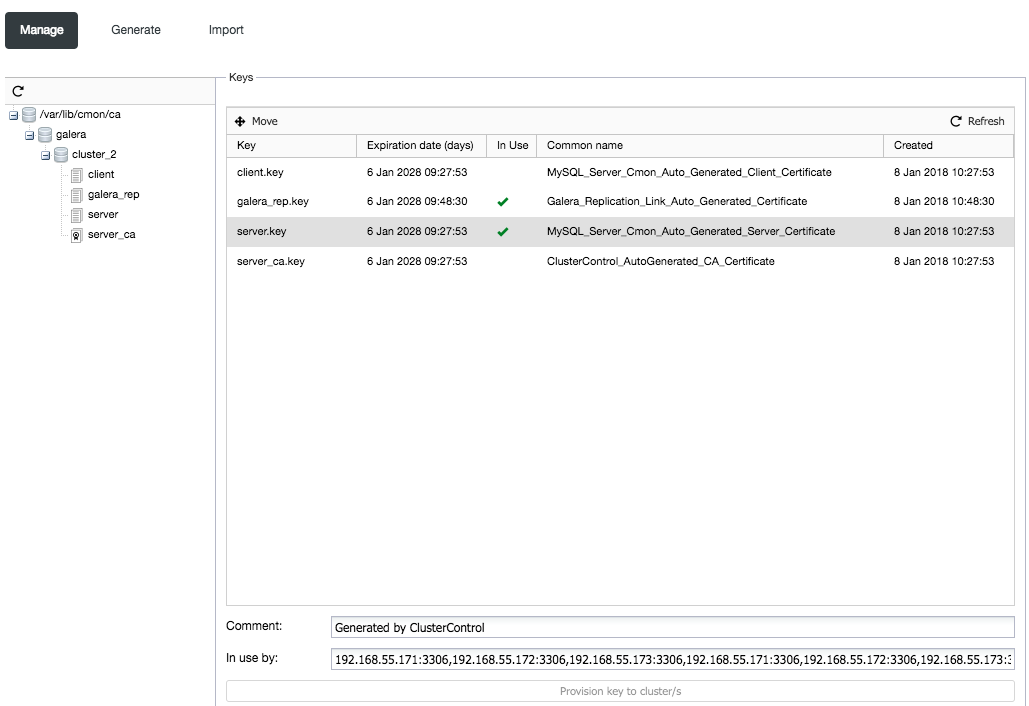 If the certificate has expired, you can simply use the UI to generate a new certificate with proper key and Certificate Authority (CA), or import an existing key and certificate into ClusterControl host.

Advisors are mini-programs that run in ClusterControl. They perform specific tasks and provide advice on how to address issues in areas such as performance, security, log management, configuration, storage space and others. Each advisor can be scheduled like a cron job, and run as a standalone executable within the ClusterControl UI. It can also be run via the ClusterControl ‘s9s’ command line client.

For MongoDB, we have the following advisors:

For more details on how does ClusterControl performs the security checks, you can look at the advisor JavaScript-like source code under Manage -> Developer Studio. You can see the execution results from the Advisors page: 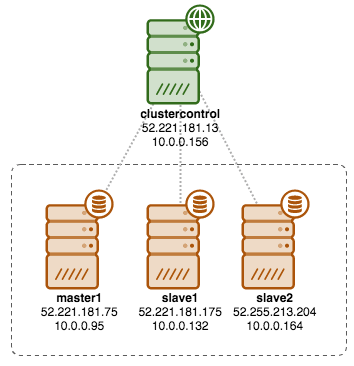 To import the above database cluster into ClusterControl, one would specify the primary IP address of the database hosts. Then, it is possible to choose the management network as well as the data network: 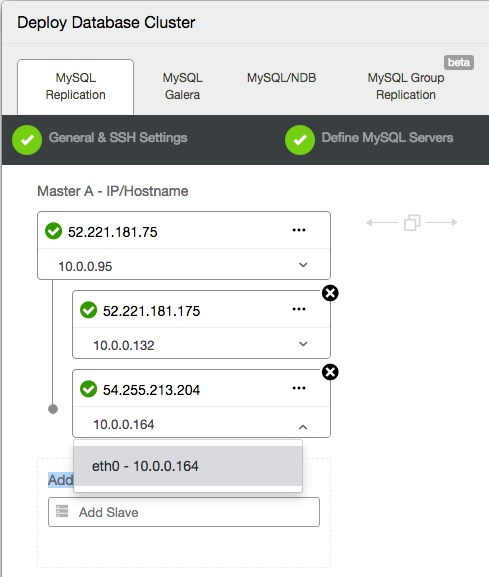 ClusterControl can also work in an environment without Internet access, with the databases being totally isolated from the public network. The majority of the features will work just fine. If the ClusterControl host is configured with Internet, it is also capable of cloning the database vendor’s repository for the internet-less database servers. Just go to Settings (top menu) -> Repositories -> Create New Repository and set the options to fit the target database server environment: 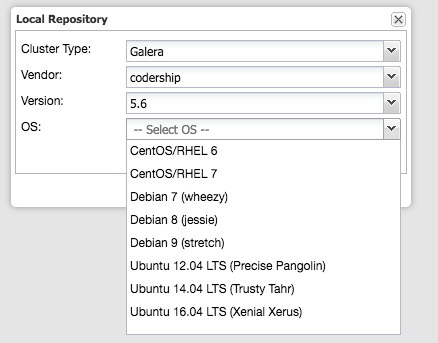 The mirroring may take about 10 to 20 minutes depending on the internet connection, you will see the new item in the list later on. You can then pick this repository instead when scaling or deploying a new cluster, without the need for the database hosts to have any Internet connection (note that the operating system’s offline repository should be in place as well).

The MySQL privilege system ensures that all users can perform only the operations they are allowed to. Granting is critical as you don’t want to give all users complete access to your database, but you need users to have the necessary permissions to run queries and perform daily tasks.

ClusterControl provides an interactive user interface to manage the database schemas and privileges. It unifies the accounts on all MySQL servers in the cluster and simplifies the granting process. You can easily visualize the database users, so you avoid making mistakes. 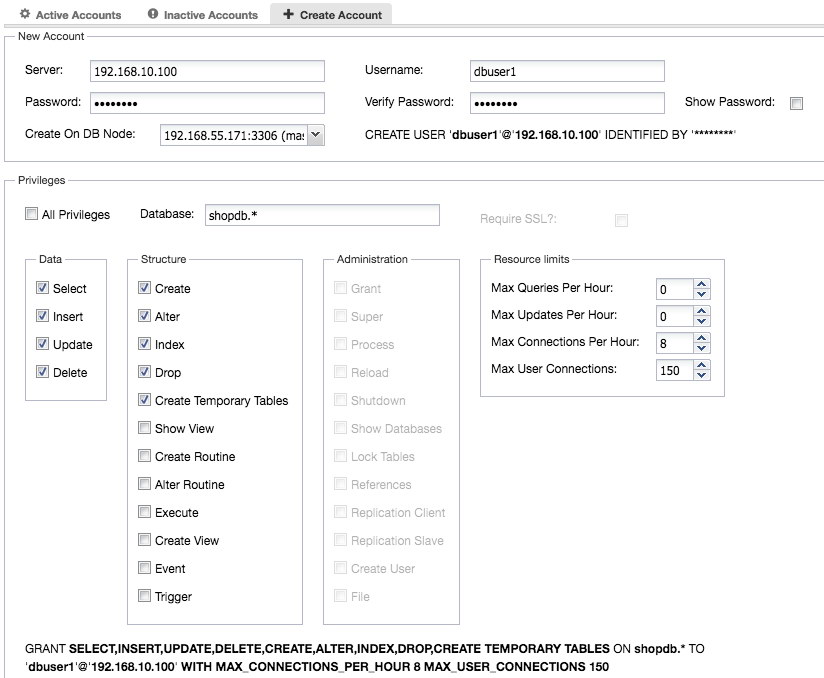 As you can see in the above screenshot, ClusterControl greyed out unnecessary privileges if you only want to grant a user to a database (shopdb). “Require SSL?” is only enabled if the client/server SSL encryption is enabled while the administration privilege checkboxes are totally disabled if a specific database is defined. You can also inspect the generated GRANT statement at the bottom of the wizard, to see the statement that ClusterControl will execute to create this user. This helper looks pretty simple, but creating users and granting privileges can be error-prone.

ClusterControl also provides a list of inactive users for all database nodes in the cluster, showing off the accounts that have not been used since the last server restart: 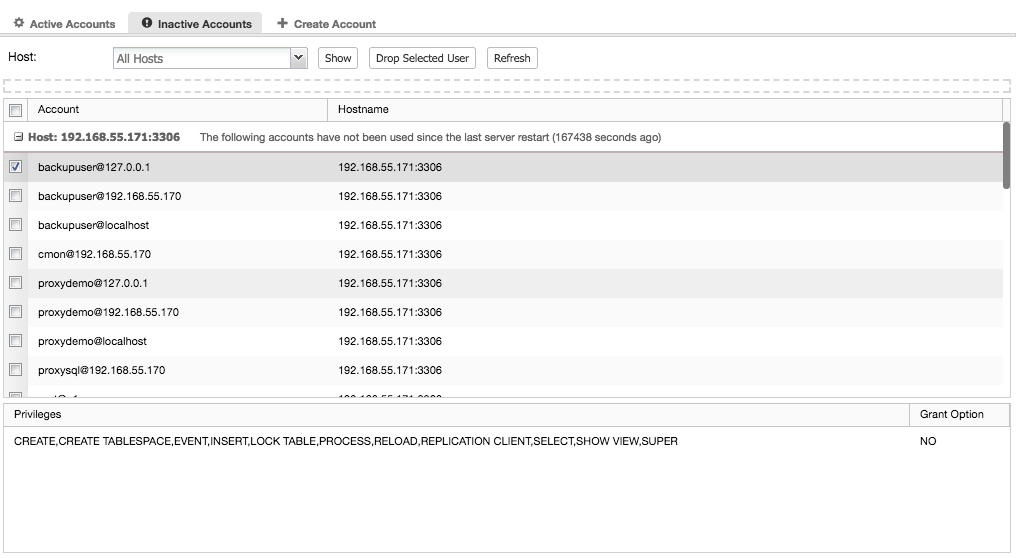 This alerts the administrator for unnecessary accounts that exist, and that could potentially harm the server. The next step is to verify if the accounts are no longer active, and you can simply use the “Drop Selected User” option in order to remove them. Make sure you have enough database activity to ensure the list generated by ClusterControl is accurate. The longer the server uptime, the better.

For production use, it’s highly recommended for you to install the database-related packages from the vendor’s repository. Don’t rely on the default operating system repository, where the packages are usually outdated. If you are running in a cluster environment like Galera Cluster, or even MySQL Replication, you always have the choice to patch the system with minimal downtime.

ClusterControl supports automatic minor version rolling upgrade for MySQL/MariaDB with a single click. Just go to Manage -> Upgrades -> Upgrade and choose the appropriate major version for your running cluster. ClusterControl will then perform the upgrade, on one node at a time. The node will be stopped, then software will be updated, and then the node will be started again. If a node fails to upgrade, the upgrade process is aborted and the admin is notified. Upgrades should only be performed when there is as little traffic as possible on the cluster.

Major versions upgrades (e.g, from MySQL 5.6 to MySQL 5.7) are intentionally not automated. Major upgrades usually require uninstallation of the existing packages, which is a risky task to automate. Careful planning and testing is necessary for such kind of upgrades.

Database security is an important aspect of running your database in production. From all the incidents we frequently read about in the news (and there are probably many others that are not publicized), it is clear that there are groups busy out there with bad intentions. So, make sure your databases are well protected.