Some basics first about the replication technology. MySQL Replication is not complicated! It is easy to implement, monitor, and tune as there are various resources you can leverage – google being one. MySQL Replication does not contain a lot of configuration variables to tune. SQL_THREAD and IO_THREAD’s logical errors aren’t that hard to understand and fix. MySQL Replication is very popular nowadays and offers a simple way of implementing database High Availability. Powerful features such as GTID (Global Transaction Identifier) instead of the old-fashioned binary log position, or lossless Semi-Synchronous Replication make it more robust.

As we saw in an earlier post, network latency is a big challenge when selecting a high availability solution. Using MySQL Replication offers the advantage of not being as sensitive to latency. It does not implement any certification-based replication, unlike Galera Cluster uses group communication and transaction ordering techniques to achieve synchronous replication. Thus, it has no requirement that all of the nodes have to certify a writeset, and no need to wait before a commit on the other slave or replica.

Choosing the traditional MySQL Replication with asynchronous Primary-Secondary approach provides you speed when it comes to handling transactions from within your master; it does not need to wait for the slaves to sync or commit transactions. The setup typically has a primary (master) and one or more secondaries (slaves). Hence, it is a shared-nothing system, where all servers have a full copy of the data by default. Of course there are drawbacks. Data integrity can be an issue if your slaves failed to replicate due to SQL and I/O thread errors, or crashes. Alternatively, to address issues of data integrity, you can choose to implement MySQL Replication being semi-synchronous (or called lossless semi-sync replication in MySQL 5.7). How this works is that, the master has to wait until a replica acknowledges all events of the transaction. This means that it has to finish its writes to a relay log and flush to disk before it sends back to the master with an ACK response. With semi-synchronous replication enabled, threads or sessions in the master has to wait for acknowledgement from a replica. Once it gets an ACK response from the replica, it can then commit the transaction. The illustration below shows how MySQL handles semi-synchronous replication.

With this implementation, all committed transaction are already replicated to at least one slave in case of a master crash. Although semi-synchronous does not represent by itself a high-availability solution, but it’s a component for your solution. It’s best that you should know your needs and tune your semi-sync implementation accordingly. Hence, if some data loss is acceptable, then you can instead use the traditional asynchronous replication.

GTID-based replication is helpful to the DBA as it simplifies the task to do a failover, especially when a slave is pointed to another master or new master. This means that with a simple MASTER_AUTO_POSITION=1 after setting the correct host and replication credentials, it will start replicating from the master without the need to find and specify the correct binary log x & y positions. Adding support of parallel replication also boosts the replication threads as it adds speed to process the events from the relay log.

Thus, MySQL Replication is a great choice component over other HA solutions if it suits your needs.

Deploying MySQL Replication in a multicloud environment with GCP (Google Cloud Platform) and AWS is still the same approach if you have to replicate on-prem.

There are various topologies you can setup and implement. 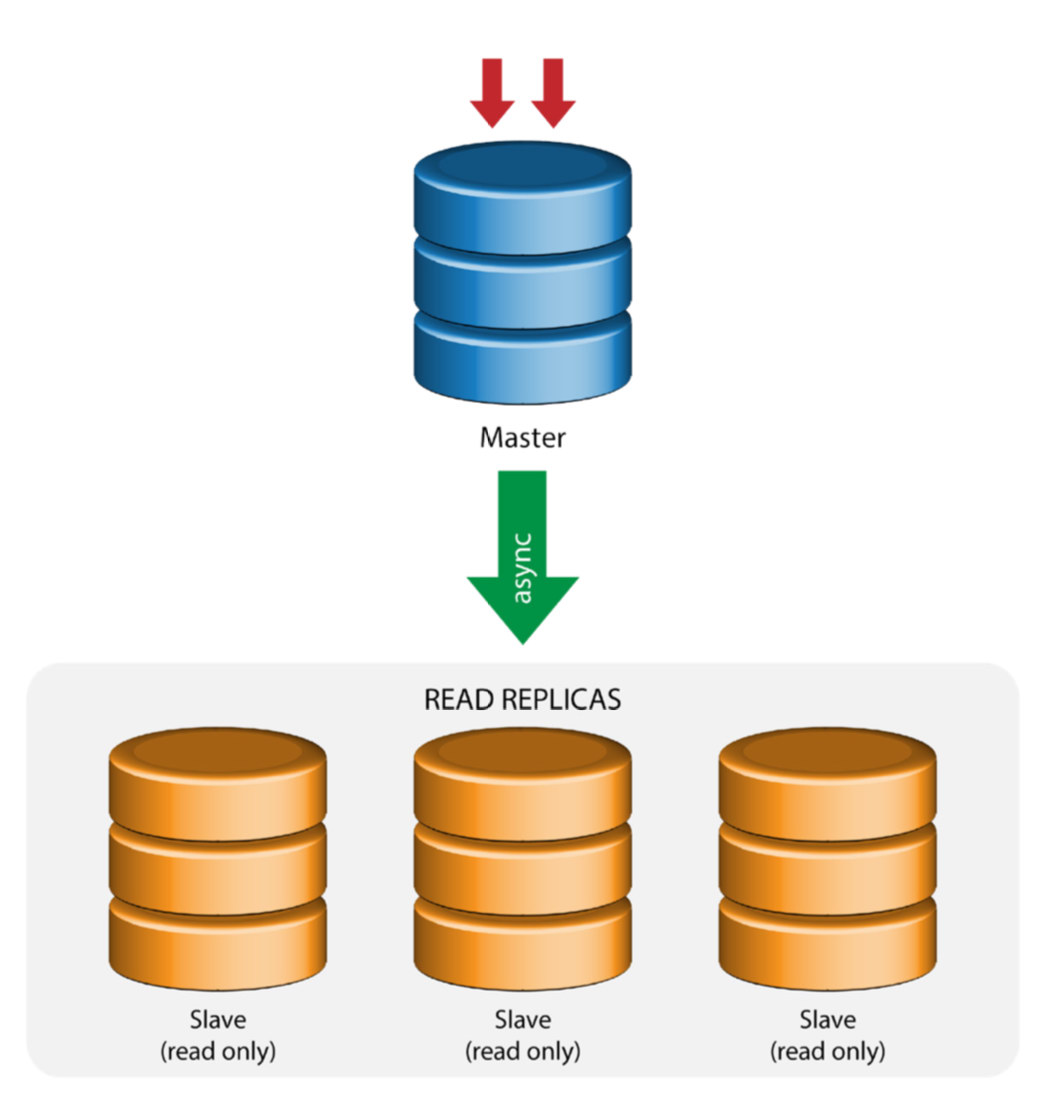 This the most straightforward MySQL replication topology. One master receives writes, one or more slaves replicate from the same master via asynchronous or semi- synchronous replication. If the designated master goes down, the most up-to-date slave must be promoted as new master. The remaining slaves resume the replication from the new master. 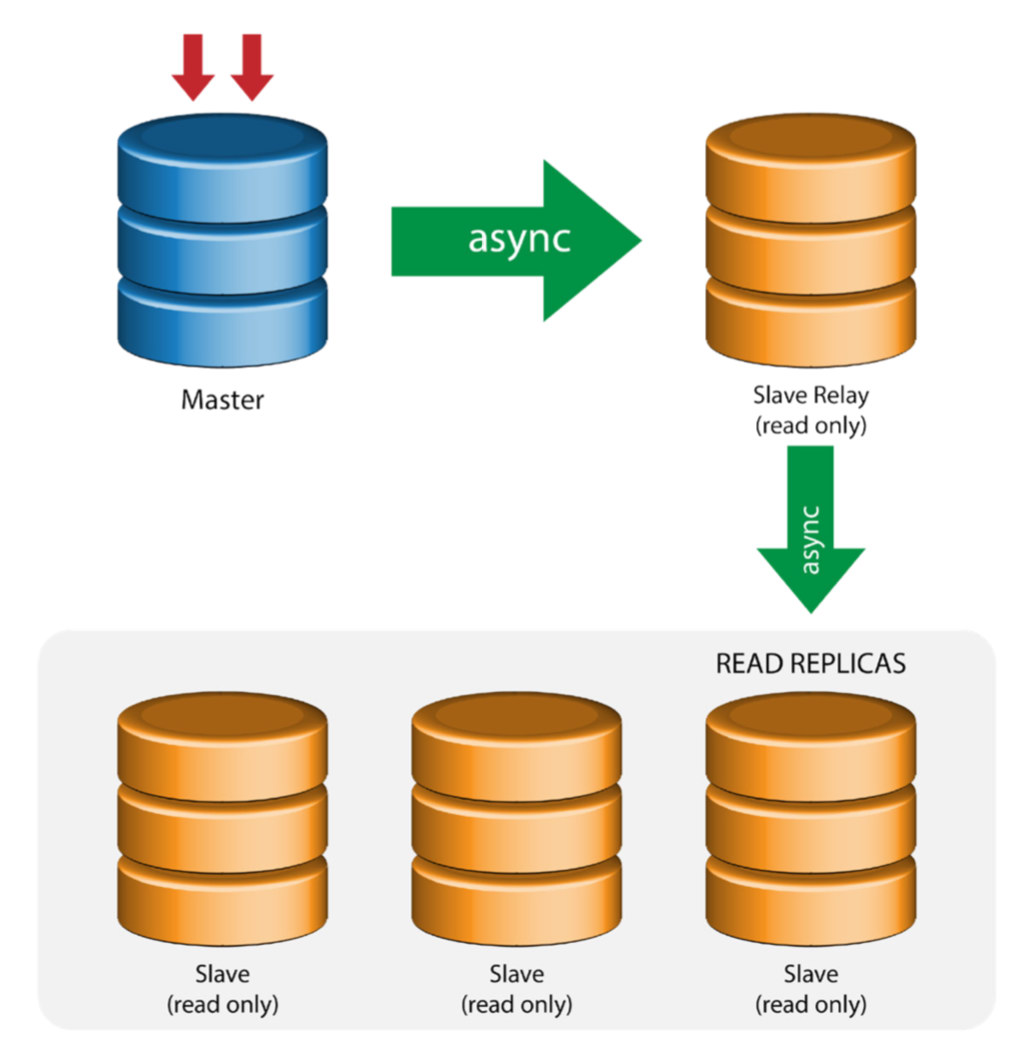 This setup use an intermediate master to act as a relay to the other slaves in the replication chain. When there are many slaves connected to a master, the network interface of the master can get overloaded. This topology allows the read replicas to pull the replication stream from the relay server to offload the master server. On the slave relay server, binary logging and log_slave_updates must be enabled, whereby updates received by the slave server from the master server are logged to the slave’s own binary log.

Using slave relay has its problems: 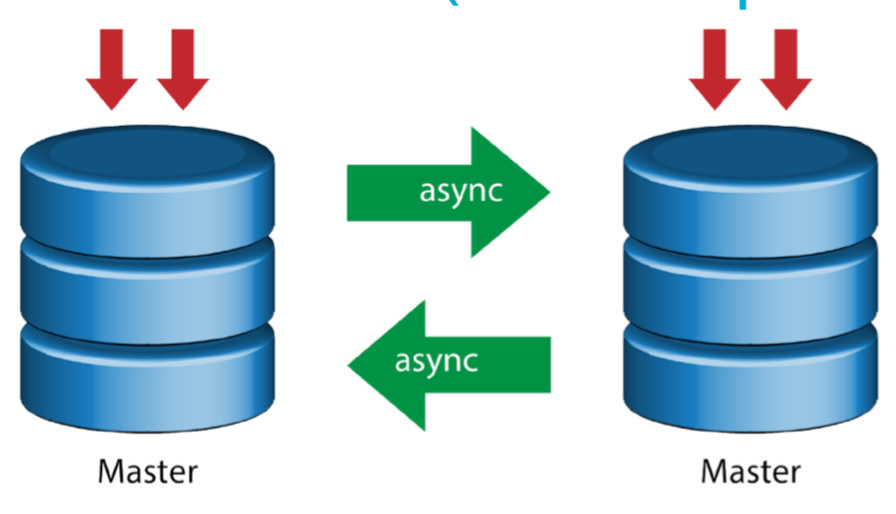 Also known as ring topology, this setup requires two or more MySQL servers which act as master. All masters receive writes and generate binlogs with a few caveats: 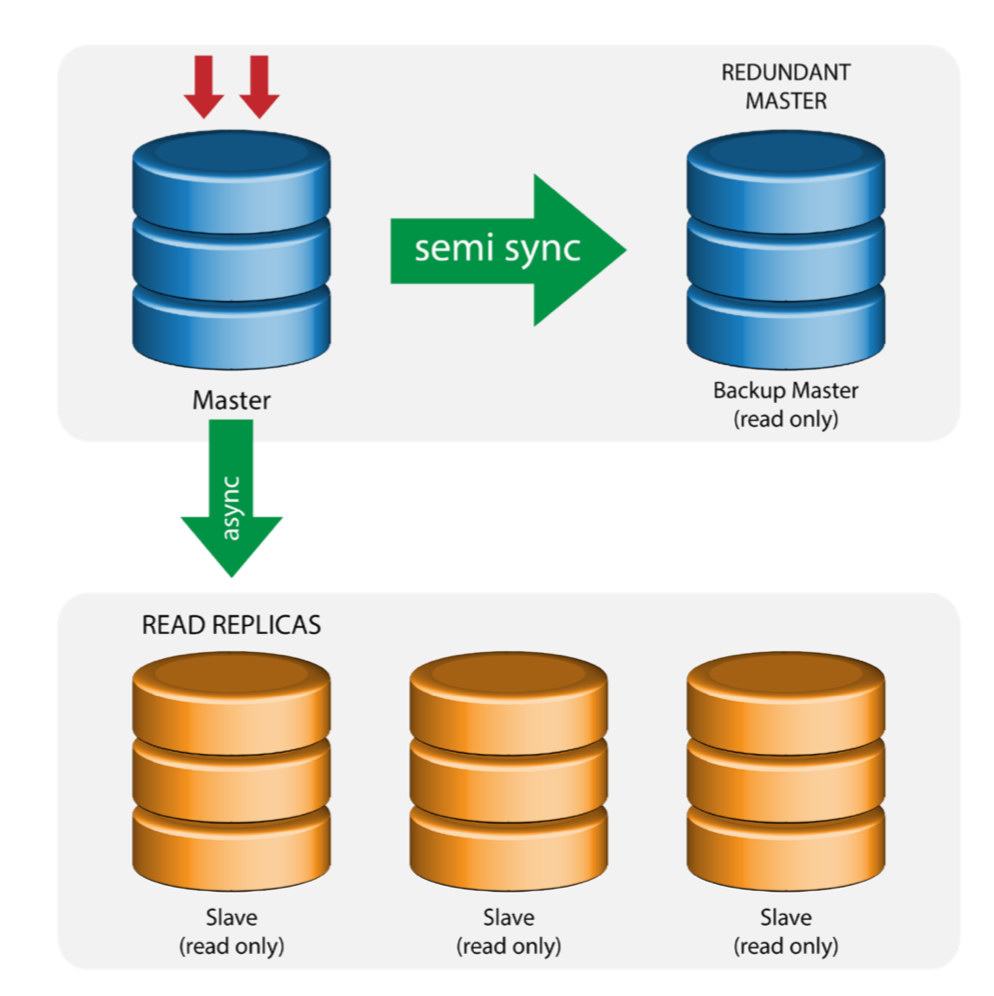 This topology works well when performing master failover in case the master goes down. The backup master acts as a warm-standby server as it has the highest probability of having up-to-date data when compared to other slaves. 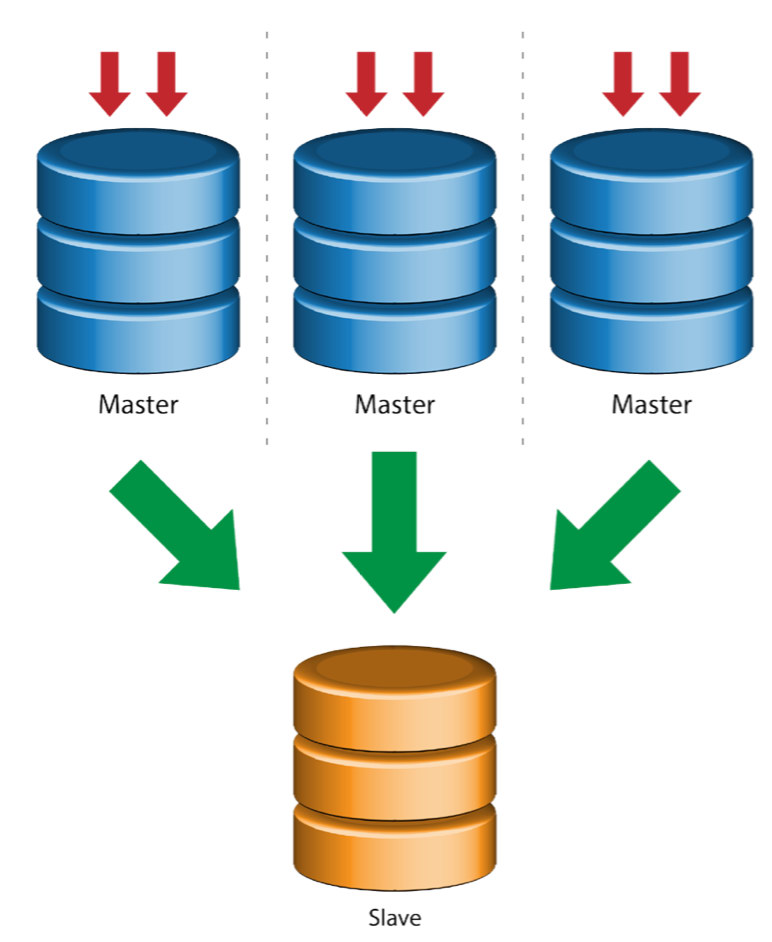 More on MariaDB multi source replication can be found in this blog post. For MySQL, please refer to the MySQL documentation.

Galera cluster performance is as fast as the slowest node. Having an asynchronous replication slave can minimize the impact on the cluster if you send long-running reporting/OLAP type queries to the slave, or if you perform heavy jobs that require locks like mysqldump. The slave can also serve as a live backup for onsite and offsite disaster recovery.

In this blog, we will demonstrate and use the “Multiple Replication” topology in which instances on two different public cloud platforms will communicate using MySQL Replication on different regions and on different availability zones. This scenario is based on a real-world problem where an organization wants to architect their infrastructure on multiple cloud platforms for scalability, redundancy, resiliency/fault-tolerance. Similar concepts would apply for MongoDB or PostgreSQL.

Let’s consider a US organization, with an overseas branch in south east Asia. Our traffic is high within the Asian-based region. Latency must be low when catering for writes and reads, but at the same time the US-based region can also pull-up records coming from the Asian-based traffic.

In this section, I will discuss the architectural design. First, we want to offer a highly-secure layer for which our Google Compute and AWS EC2 nodes can communicate, update or install packages from the internet, secure, highly-available in case an AZ (Availability Zone) goes down, can replicate and communicate to another cloud platform over a secured layer. See the image below for illustration: 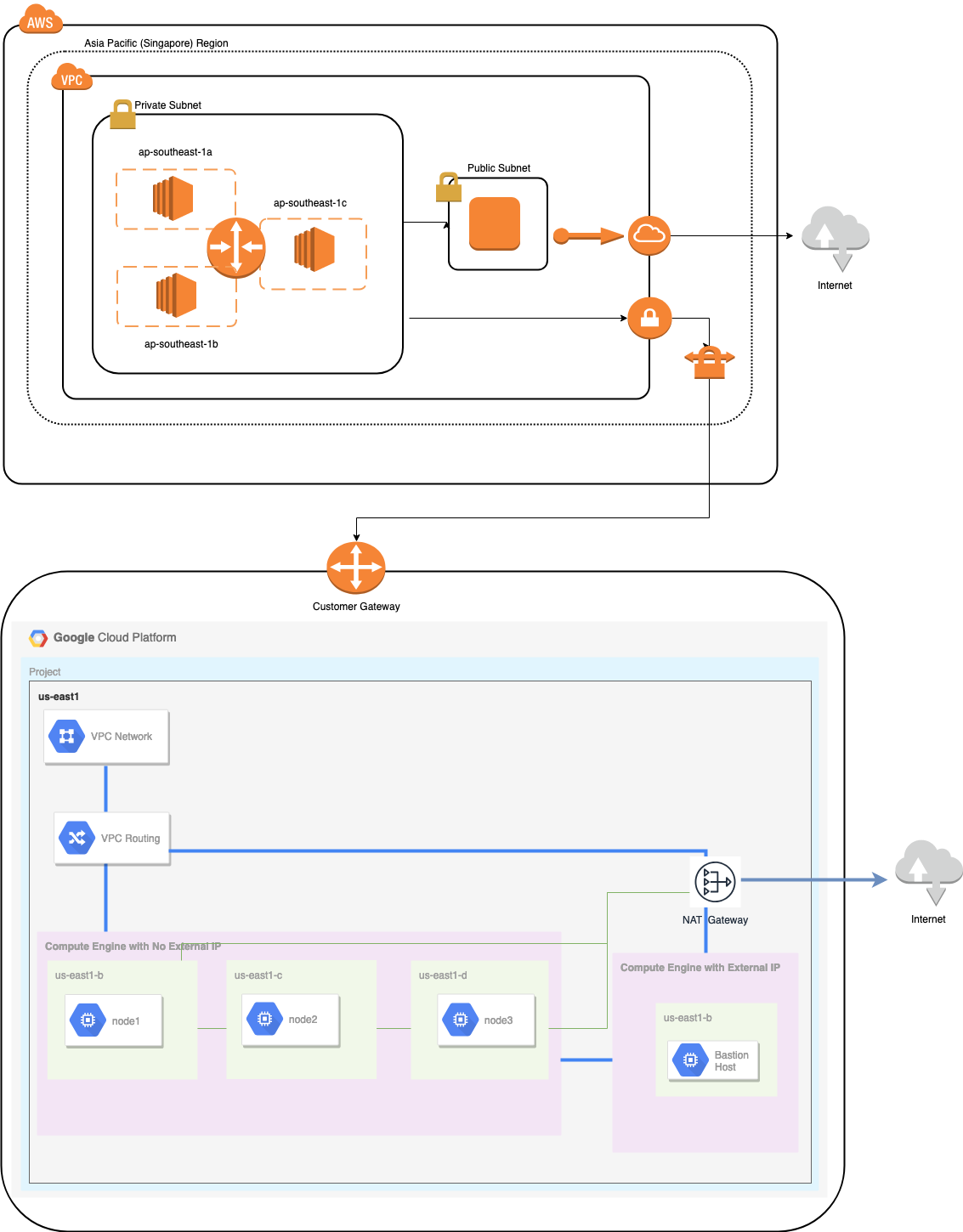 Based on the illustration above, under the AWS platform, all nodes are running on different availability zones. It has a private and public subnet for which all the compute nodes are on a private subnet. Hence, it can go outside the internet to pull and update its system packages when needed. It has a VPN gateway for which it has to interact with GCP in that channel, bypassing the Internet but through a secure and private channel. Same as GCP, all compute nodes are on different availability zones, use NAT Gateway to update system packages when needed and use VPN connection to interact with the AWS nodes which are hosted on a different region, i.e. Asia Pacific (Singapore). On the other hand, the US-based region is hosted under us-east1. In order to access the nodes, one node in the architecture serves as the bastion-node for which we will use it as the jump host and install ClusterControl. This will be tackled later in this blog.

Setting up GCP and AWS Environments

When registering your first GCP account, Google provides a default VPC (Virtual Private Cloud) account. Hence, it’s best to create a separate VPC than the default and customize it according to your needs.

Our goal here is to place the compute nodes in private subnets or nodes will not be setup with public IPv4. Hence, both public clouds must be able to talk to each other. The AWS and GCP compute nodes operate with different CIDRs as previously mentioned. Hence, here are the following CIDR:

While in GCP, the default subnet created in a VPC under us-east1 which is 10.142.0.0/20 CIDR is used. Hence, these are the steps you can follow to setup your multi-public cloud platform.

Now that our VPN is up, we’ll continue setting up our private nodes including the bastion host.

Setting up the Compute Engine Nodes

Setting up the Compute Engine/EC2 nodes will be fast and easy since we have all setup in place. I’ll not go into that details but checkout the screenshots below as it explains the setup.

Basically, on this setup. The host clustercontrol will be the bastion or jump host and for which the ClusterControl will be installed. Obviously, all the nodes here are not internet accessible. They have no External IPv4 assigned and nodes are communicating through a very secure channel using VPN.

Lastly, all these nodes from AWS to GCP are setup with one uniform system user with sudo access, which is needed in our next section. See how ClusterControl can make your life easier when in multicloud and multi-region.

ClusterControl To The Rescue!!!

Handling multiple nodes and on different public cloud platforms, plus on a different “Region” can be a “truly-painful-and-daunting” task. How do you monitor that effectively? ClusterControl acts not only as your swiss-knife, but also as your Virtual DBA. Now, let’s see how ClusterControl can make your life easier. 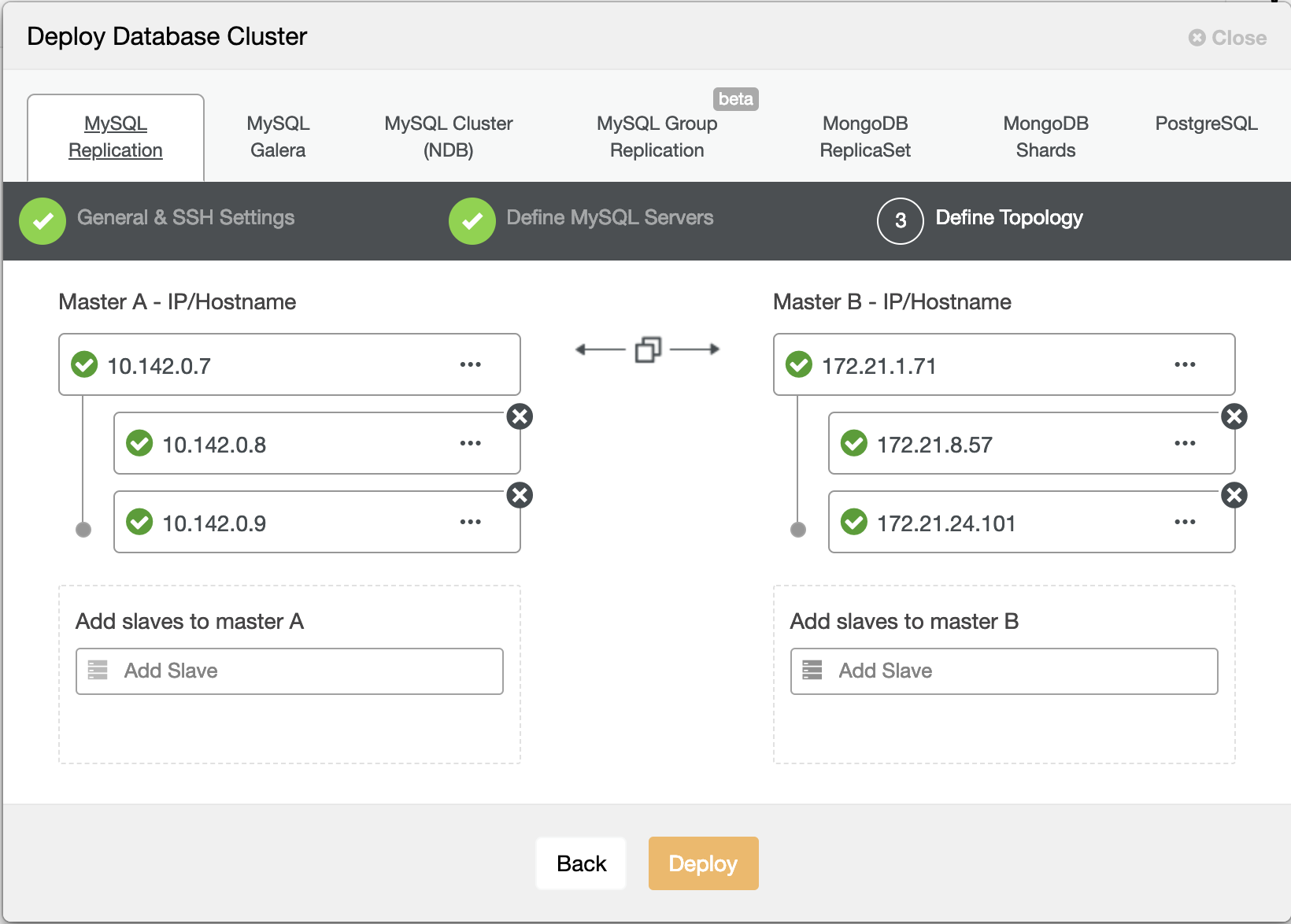 Hitting Deploy button will install packages and setup the nodes accordingly. Hence, a logical view of how the topology would look like: 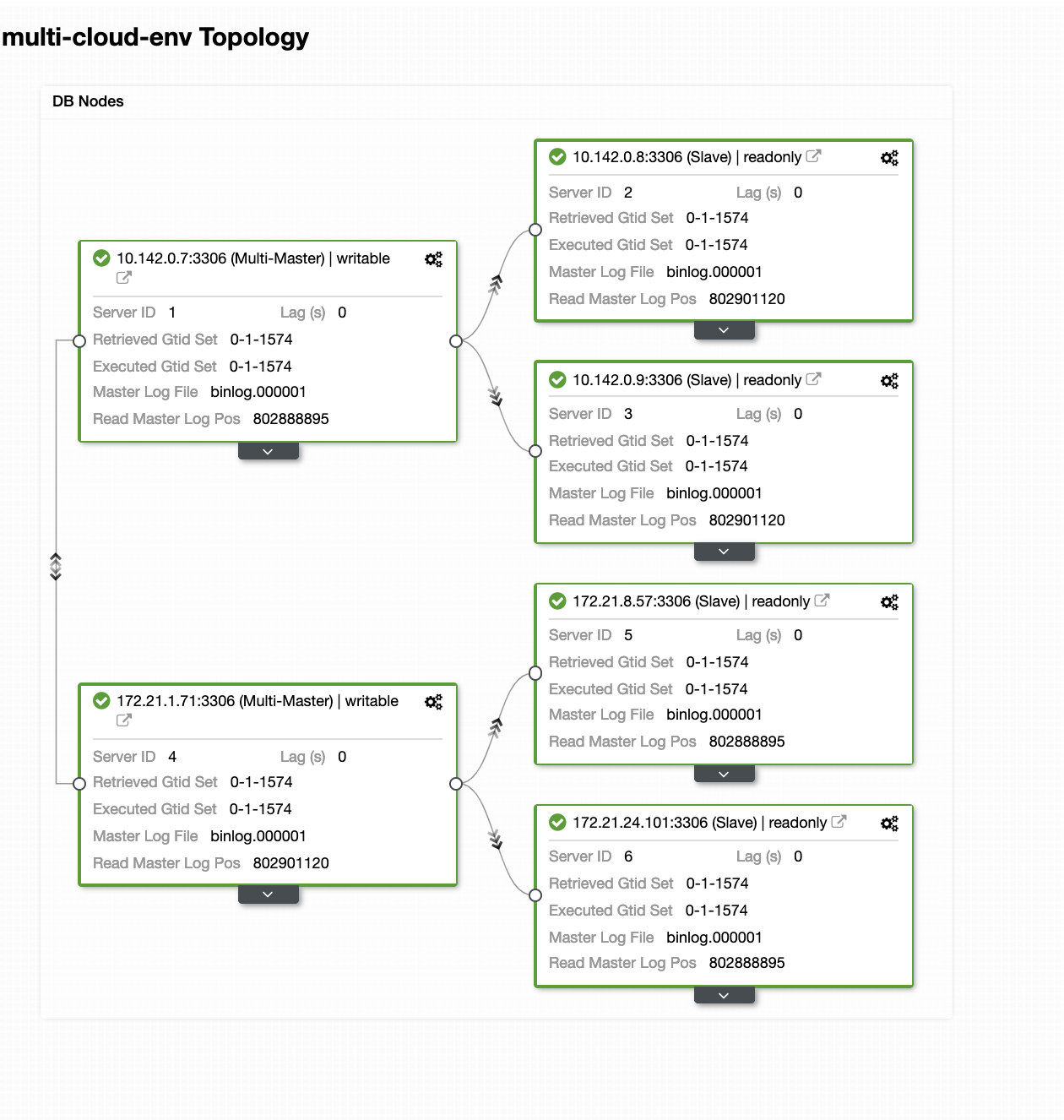 Now, how about we try to load some writes on the master? Any issues with connectivity or latency might generate slave lag, you will be able to spot this with ClusterControl. See the screenshot below:

and as you see in the top-right corner of the screenshot, it turns red as it indicates issues were detected. Hence, an alarm was being sent while this issue has been detected. See below: 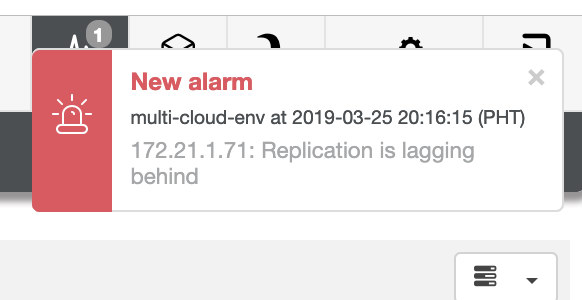 We need to dig into this. For fine-grained monitoring, we have enabled agents on the database instances. Let’s have a look at the Dashboard. 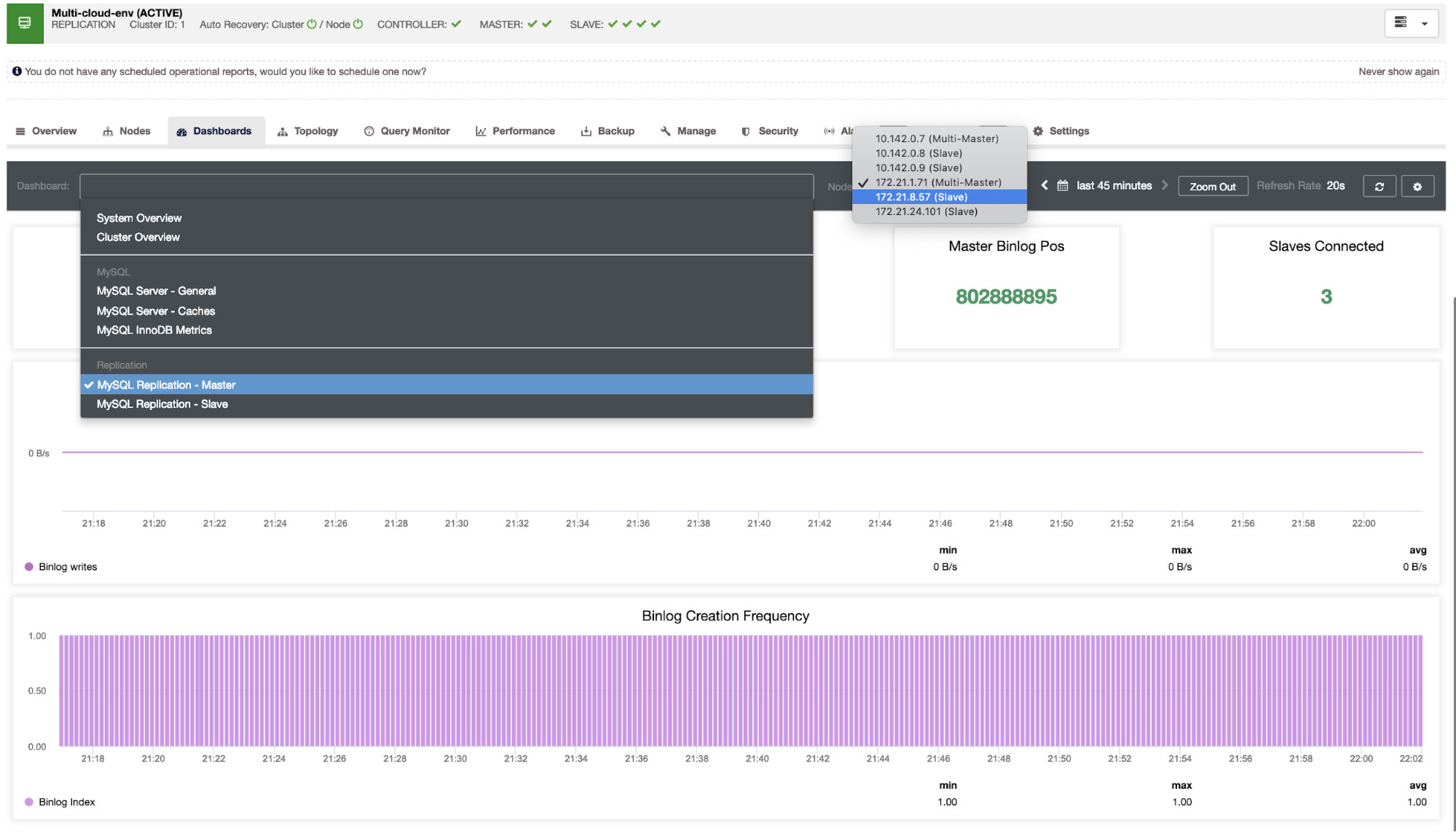 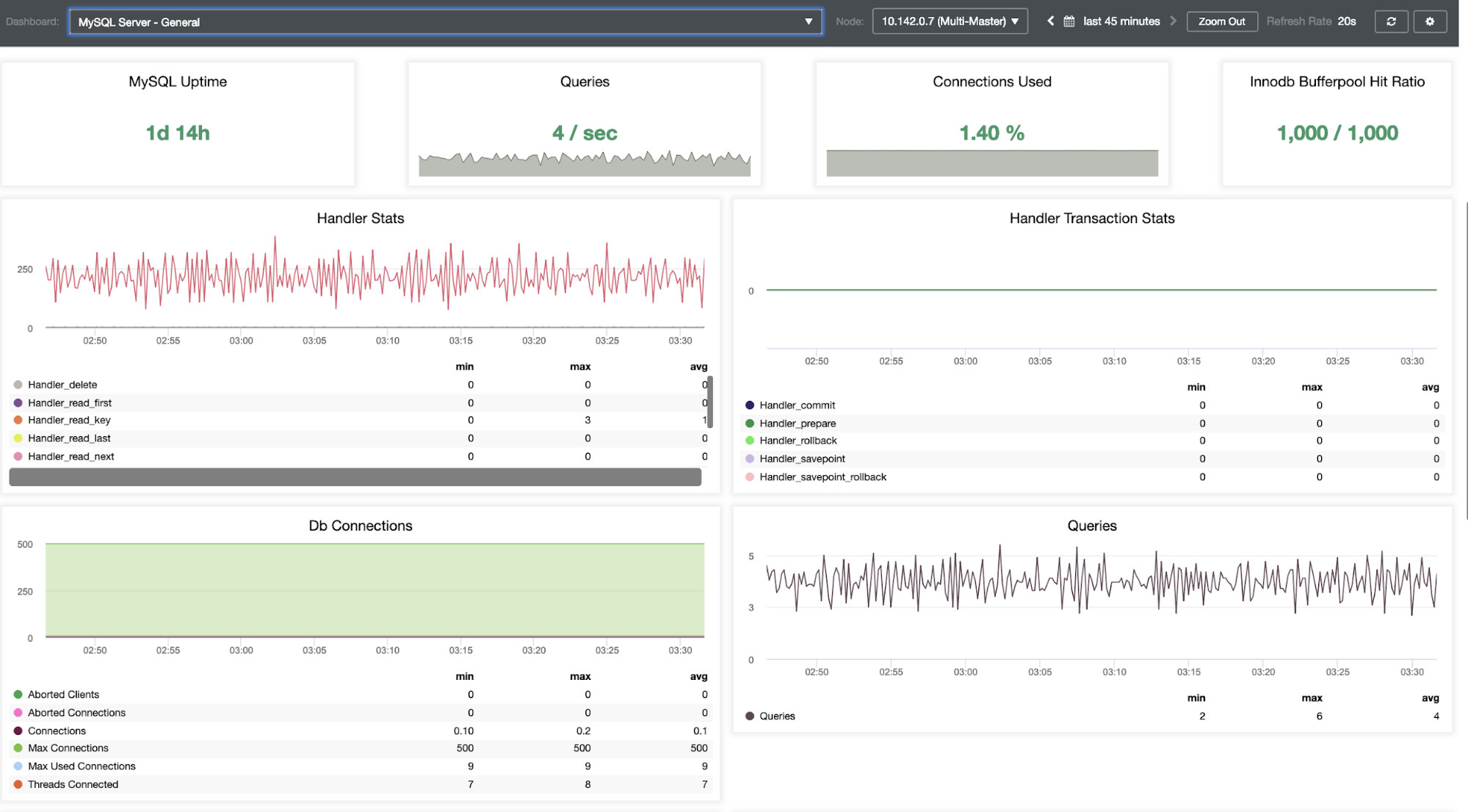 It offers a super smooth experience in terms of monitoring your nodes.

It tells us that utilization is high or host is not responding. Although this was just a ping response failure, you can ignore the alert to stop you from bombarding it. Hence, you can ‘un-ignore’ it if needed by going to Cluster -> Alarms in the Clustercontrol. See below:

Let’s say that the us-east1 master node failed, or requires a major overhaul because of system or hardware upgrade. Let’s say this is the topology right now (see image below): 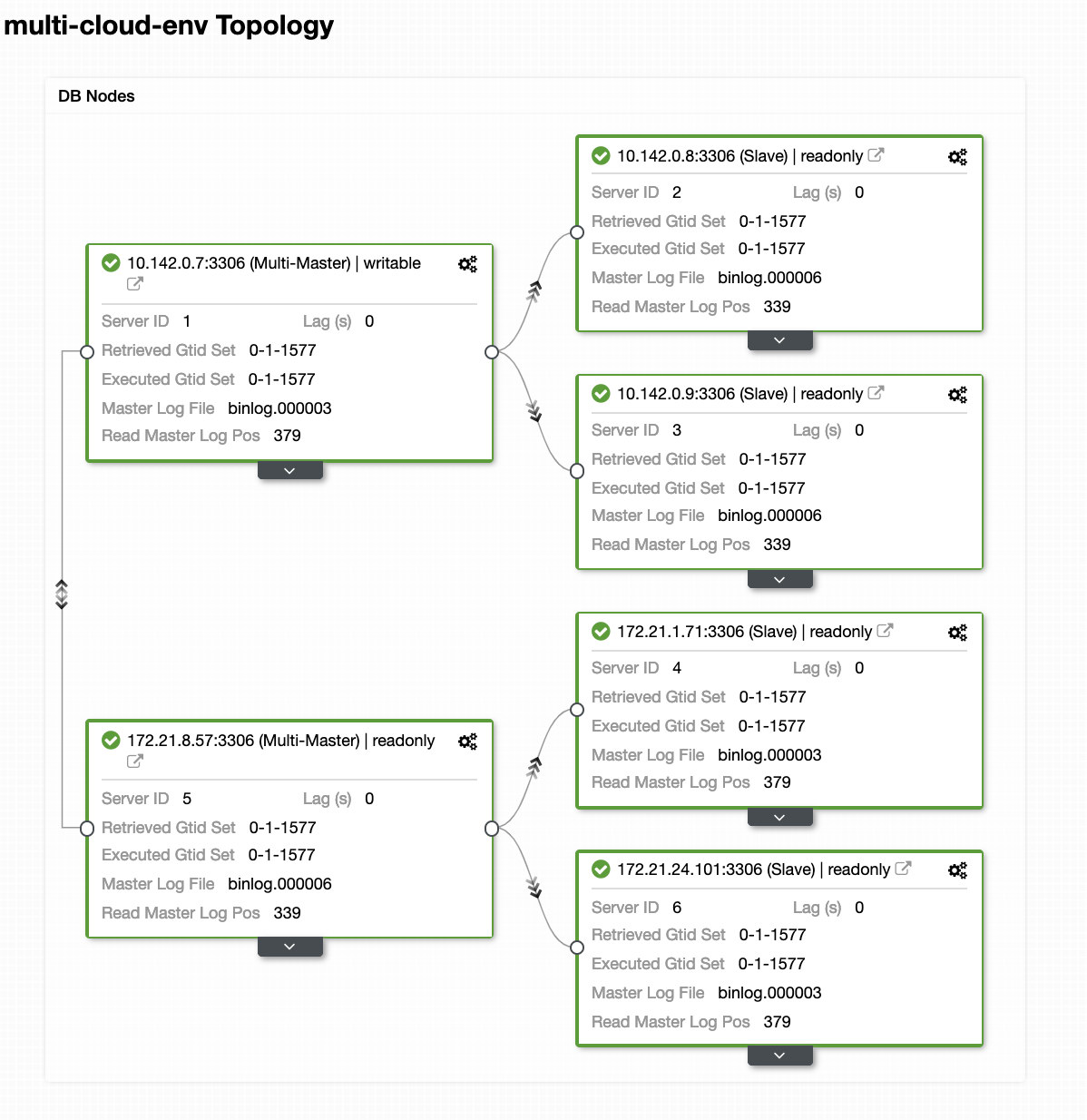 Let’s try to shutdown host 10.142.0.7 which is the master under the region us-east1. See the screenshots below how ClusterControl reacts to this: 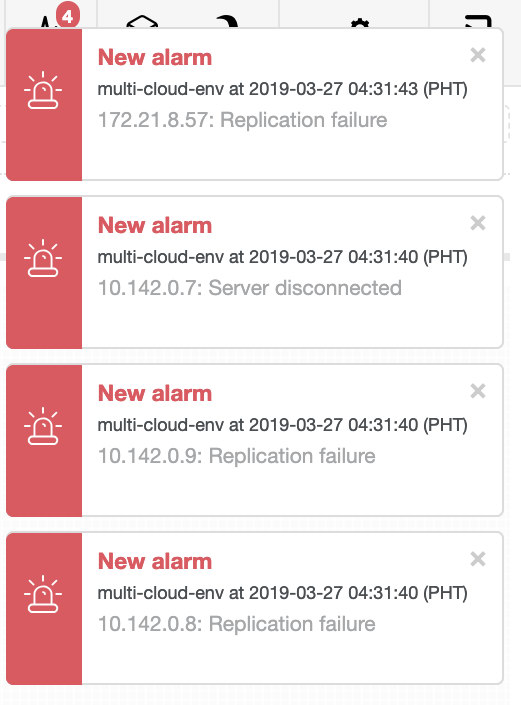 ClusterControl sends alarms once it detects anomalies in the cluster. Then it tries to do a failover to a new master by choosing the right candidate (see image below):

Then, it set aside the failed master which has been already taken out from the cluster (see image below): 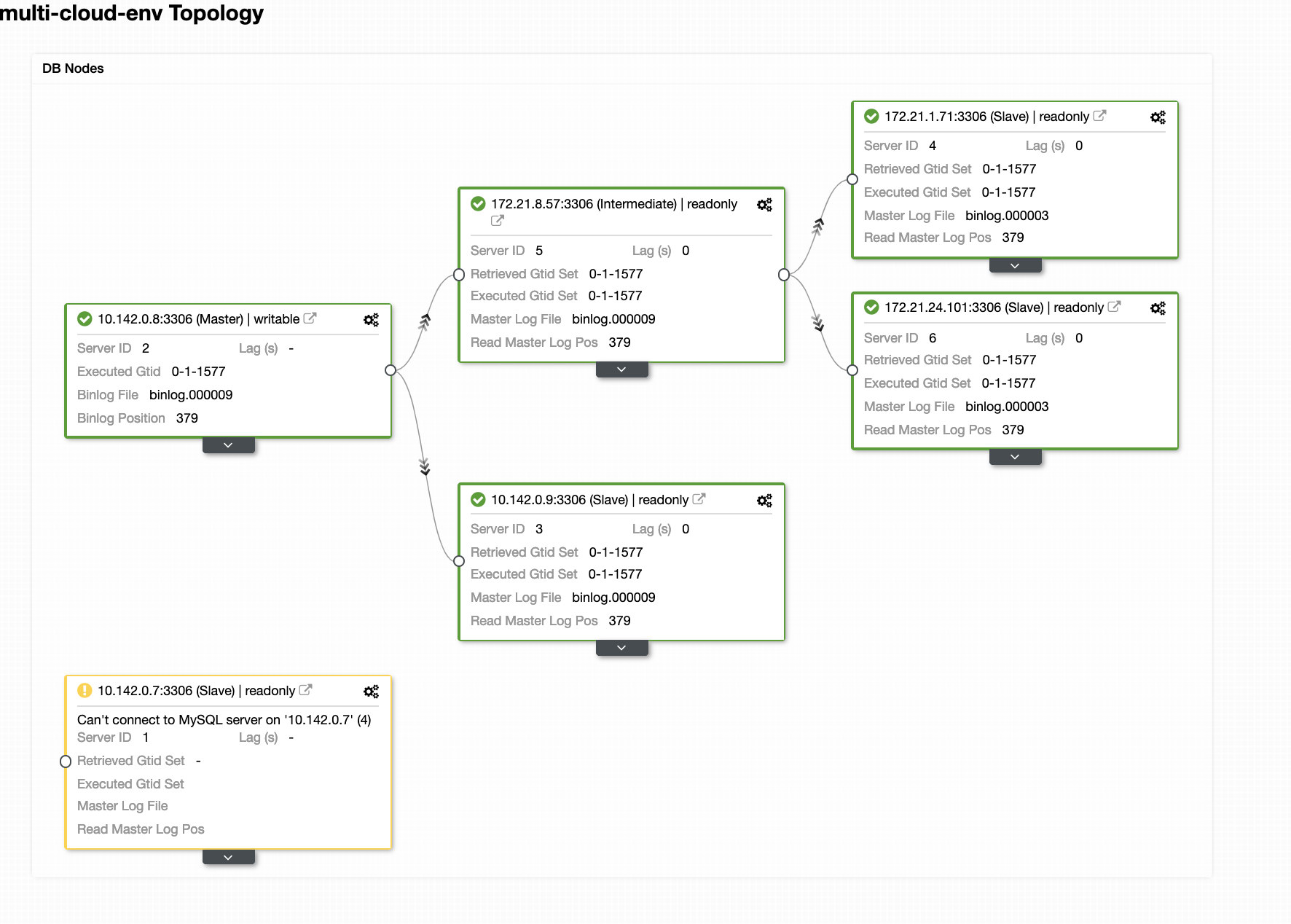 This is just a glimpse of what ClusterControl can do, there are other great features such as backups, query monitoring, deploying/managing load balancers, and many more!

Managing your MySQL Replication setup in a multicloud can be tricky. Much care must be taken to secure our setup, so hopefully this blog gives an idea on how to define subnets and protect the database nodes. After security, there are a number of things to manage and this is where ClusterControl can be very helpful.

Try it now and do let us know how it goes. You can contact us here anytime.