There are various ways to retain high availability with databases. You can use Virtual IPs (VRRP) to manage host availability, you can use resource managers like Zookeeper and Etcd to (re)configure your applications or use load balancers/proxies to distribute the workload over all available hosts.

The Virtual IPs need either an application to manage them (MHA, Orchestrator), some scripting (Keepalived, Pacemaker/Corosync) or an engineer to manually fail over and the decision making in the process can become complex. The Virtual IP failover is a straightforward and simple process by removing the IP address from one host, assigning it to another and use arping to send a gratuitous ARP response. In theory a Virtual IP can be moved in a second but it will take a few seconds before the failover management application is sure the host has failed and acts accordingly. In reality this should be somewhere between 10 and 30 seconds. Another limitation of Virtual IPs is that some cloud providers do not allow you to manage your own Virtual IPs or assign them at all. E.g., Google does not allow you to do that on their compute nodes.

Resource managers like Zookeeper and Etcd can monitor your databases and (re)configure your applications once a host fails or a slave gets promoted to master. In general this is a good idea but implementing your checks with Zookeeper and Etcd is a complex task.

A load balancer or proxy will sit in between the application and the database host and work transparently as if the client would connect to the database host directly. Just like with the Virtual IP and resource managers, the load balancers and proxies also need to monitor the hosts and redirect the traffic if one host is down. ClusterControl supports two proxies: HAProxy and ProxySQL and both are supported for MySQL master-slave replication and Galera cluster. HAProxy and ProxySQL both have their own use cases, we will describe them in this post as well.

Why do you Need a Load Balancer?

In theory you don’t need a load balancer but in practice you will prefer one. We’ll explain why.

Also for Galera there is a similar challenge: you can in theory add as many hosts as you’d like to your application config and pick one at random. The same problem arises when this host is down: you might end up connecting to an unavailable host. Also using all hosts for both reads and writes might also cause rollbacks due to the optimistic locking in Galera. If two connections try to write to the same row at the same time, one of them will receive a roll back. In case your workload has such concurrent updates, it is advised to only use one node in Galera to write to. Therefore you want a manager that keeps track of the internal state of your database cluster.

Both HAProxy and ProxySQL will offer you the functionality to monitor the MySQL/MariaDB database hosts and keep state of your cluster and its topology. For replication setups, in case a slave replica is down, both HAProxy and ProxySQL can redistribute the connections to another host. But if a replication master is down, HAProxy will deny the connection and ProxySQL will give back a proper error to the client. For Galera setups, both load balancers can elect a master node from the Galera cluster and only send the write operations to that specific node.

On the surface HAProxy and ProxySQL may seem to be similar solutions, but they differ a lot in features and the way they distribute connections and queries. HAProxy supports a number of balancing algorithms like least connections, source, random and round-robin while ProxySQL distributes connections using the weight-based round-robin algorithm (equal weight means equal distribution). Since ProxySQL is an intelligent proxy, it is database aware and is also able to analyze your queries. ProxySQL is able to do read/write splitting based on query rules where you can forward the queries to the designated slaves or master in your cluster. ProxySQL includes additional functionality like query rewriting, caching and query firewall with real-time, in-depth statistics generation about the workload.

That should be enough background information on this topic, so let’s see how you can deploy both load balancers for MySQL replication and Galera topologies.

Using ClusterControl to deploy HAProxy on a Galera cluster is easy: go to the relevant cluster and select “Add Load Balancer”: 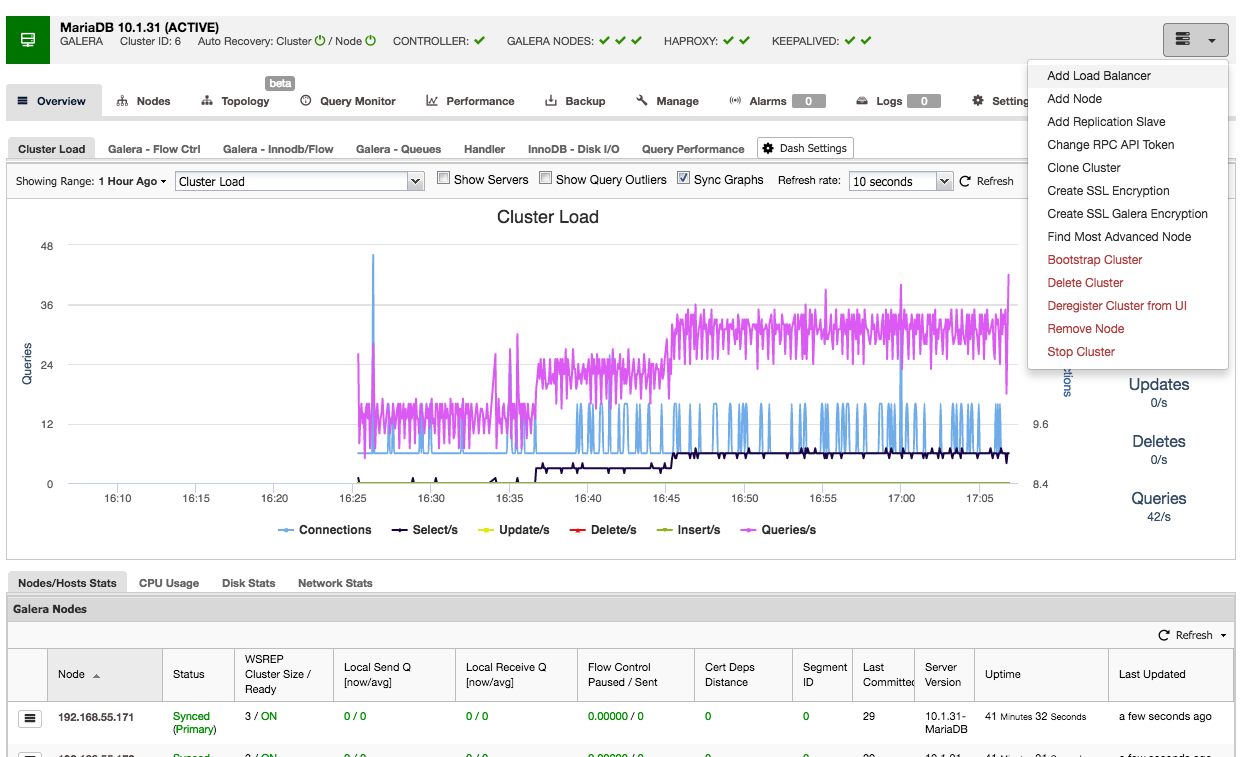 And you will be able to deploy an HAProxy instance by adding the host address and selecting the server instances you wish to include in the configuration: 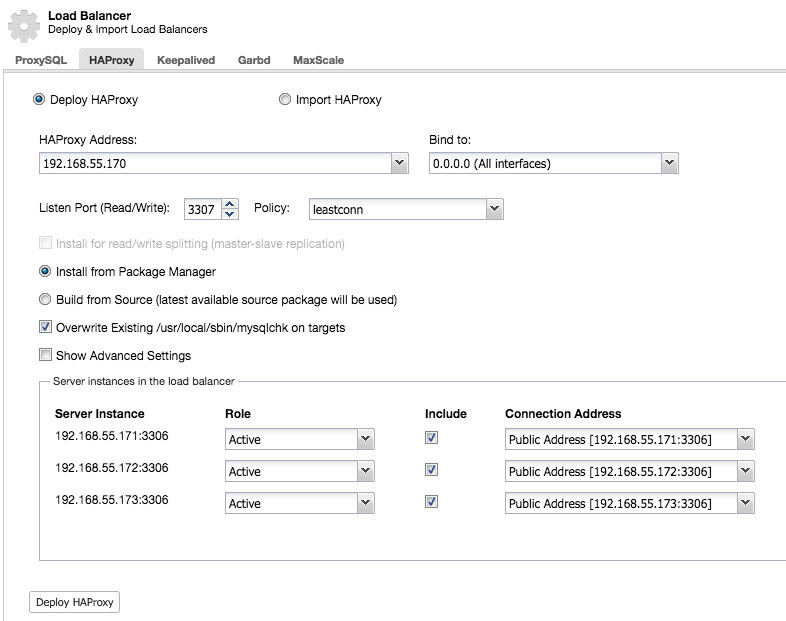 By default the HAProxy instance will be configured to send connections to the server instances receiving the least number of connections, but you can change that policy to either round robin or source.

Under advanced settings you can set timeouts, maximum amount of connections and even secure the proxy by whitelisting an IP range for the connections.

Under the nodes tab of that cluster, the HAProxy node will appear: 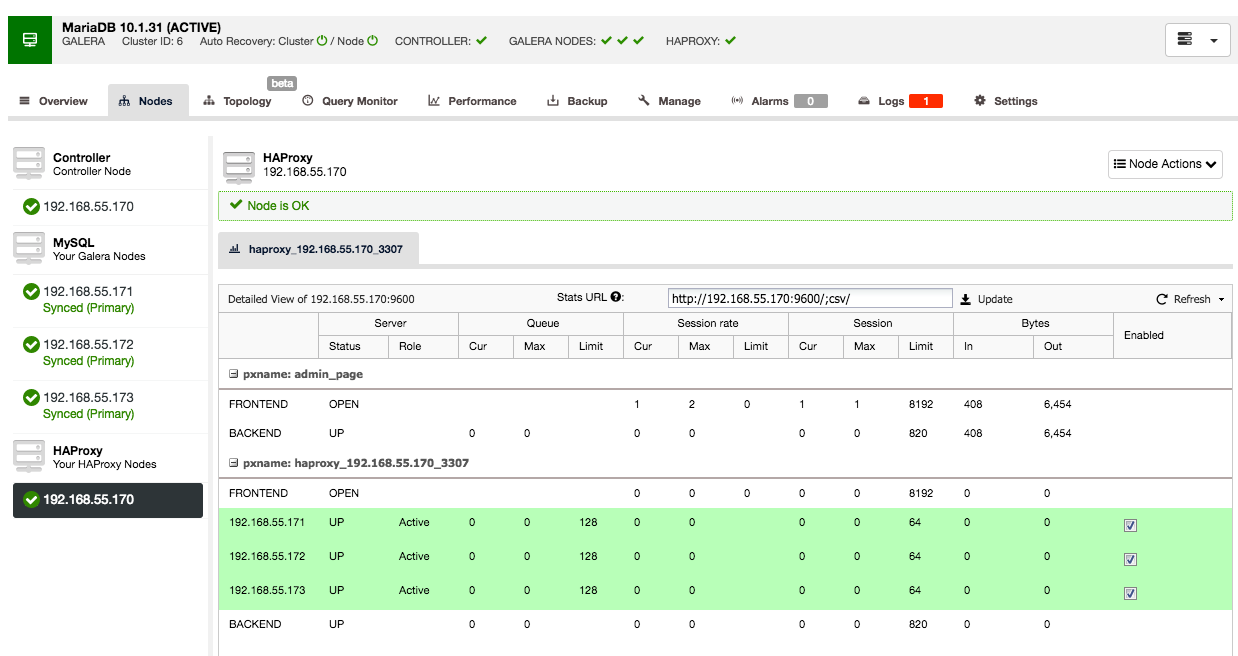 Now suppose the one server instance would go down, HAProxy will notice this within a few seconds and stop sending traffic to this instance:

The two other nodes are still fine and will keep receiving traffic. This retains the cluster highly available without the client even noticing the difference.

Now that we have moved the responsibility of retaining high availability over the database connections from the client to HAProxy, what if the proxy node dies? The answer is to create another HAProxy instance and use a virtual IP controlled by Keepalived as shown in this diagram: 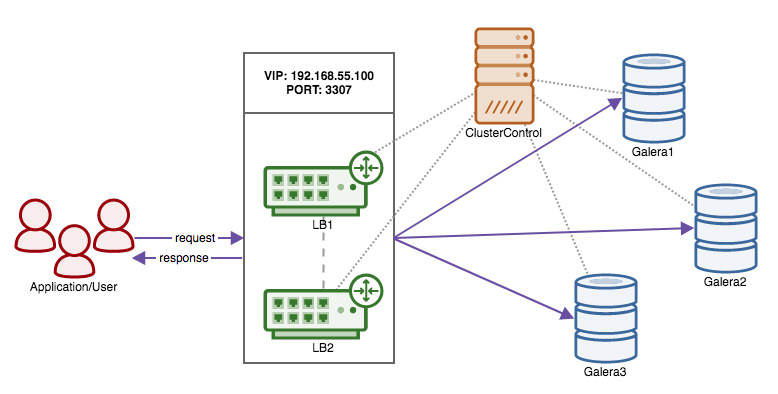 The benefit compared to using virtual IPs on the database nodes is that the logic for MySQL is at the proxy level and the failover for the proxies is simple. 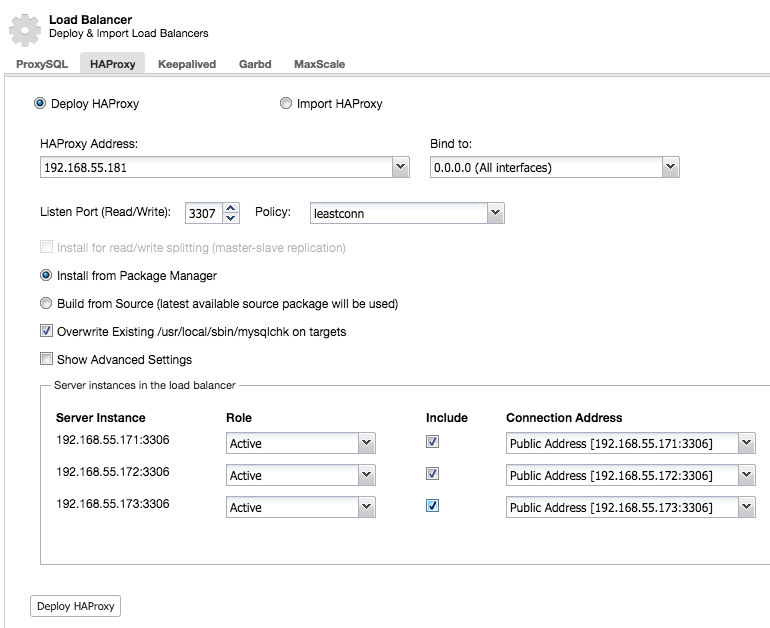 After we have deployed a secondary HAProxy node, we need to add Keepalived:

And after Keepalived has been added, your nodes overview will look like this:

So now instead of pointing your application connections to the HAProxy node directly you have to point them to the virtual IP instead.

In the example here, we used separate hosts to run HAProxy on, but you could easily add them to existing server instances as well. HAProxy does not bring much overhead, although you should keep in mind that in case of a server failure, you will lose both the database node and the proxy.

Deploying ProxySQL to your cluster is done in a similar way to HAProxy: “Add Load Balancer” in the cluster list under ProxySQL tab. 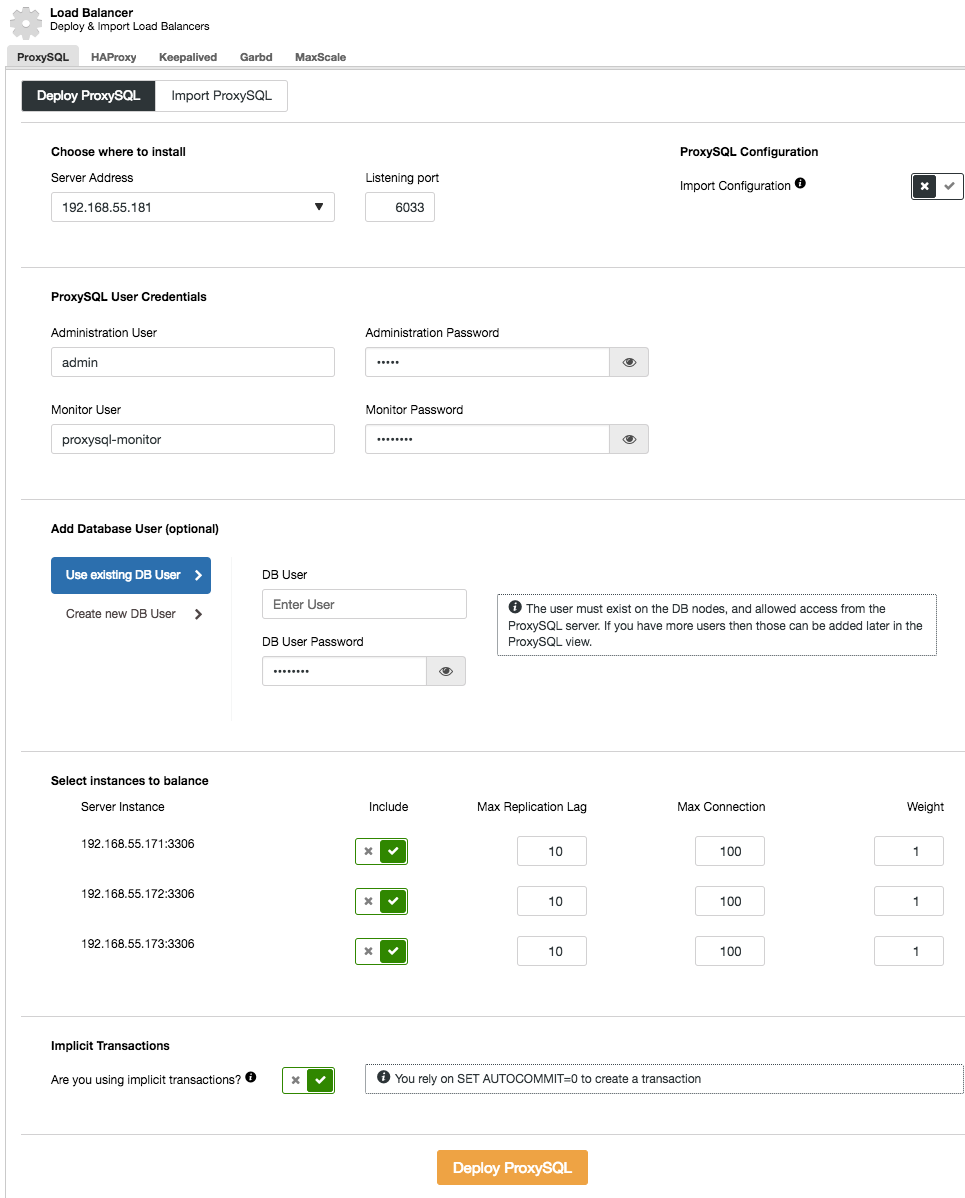 In the deployment wizard, specify where ProxySQL will be installed, the administration user/password, the monitoring user/password to connect to the MySQL backends. From ClusterControl, you can either create a new user to be used by the application (the user will be created on both MySQL and ProxySQL) or use the existing database users (the user will be created on ProxySQL only). Set whether are you are using implicit transactions or not. Basically, if you don’t use SET autocommit=0 to create new transaction, ClusterControl will configure read/write split.

After ProxySQL has been deployed, it will be available under the Nodes tab: 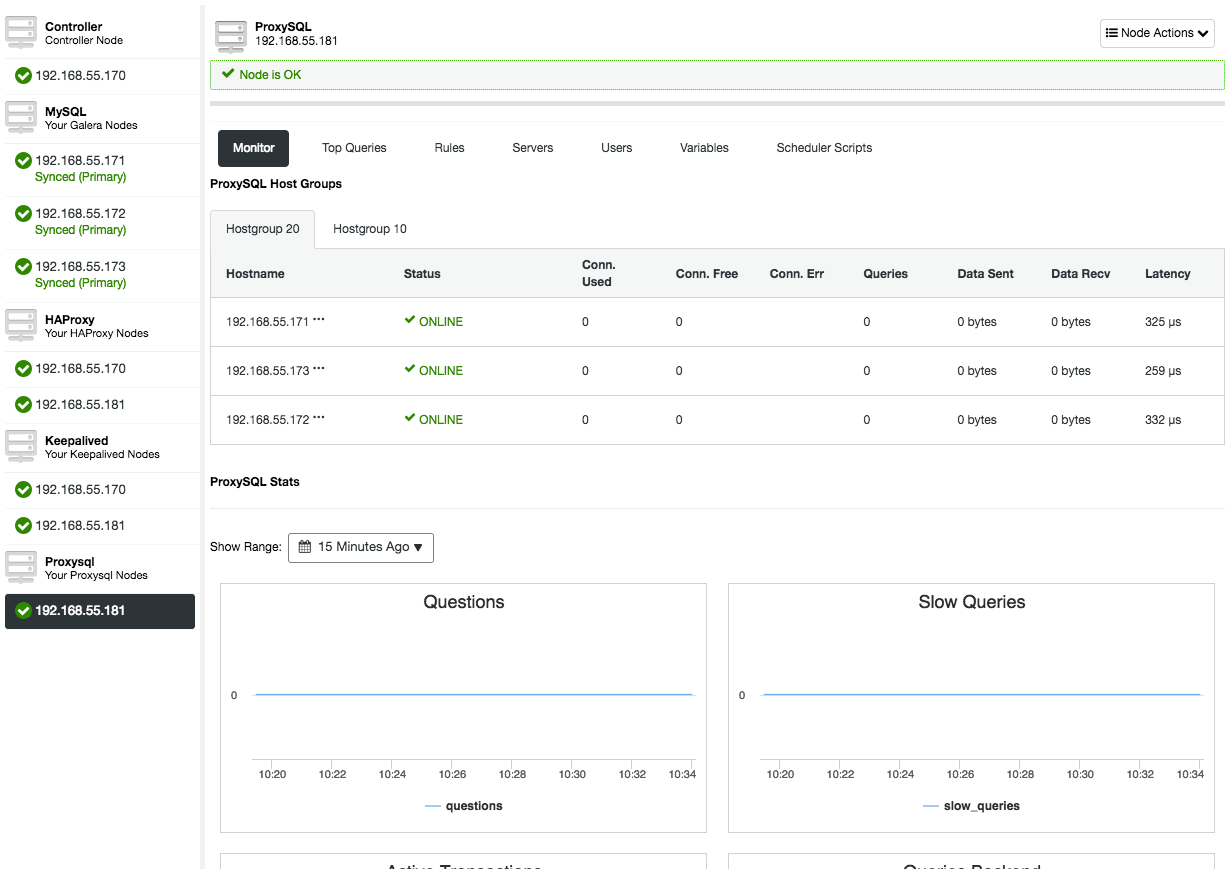 Check out our ProxySQL tutorial page which covers extensively on how to perform database Load Balancing for MySQL and MariaDB with ProxySQL.

Galera implements a quorum-based algorithm to select a primary component through which it enforces consistency. The primary component needs to have a majority of votes (50% + 1 node), so in a 2 node system, there would be no majority resulting in split brain. Fortunately, it is possible to add a garbd (Galera Arbitrator Daemon), which is a lightweight stateless daemon that can act as the odd node. The added benefit by adding the Galera Arbitrator is that you can now do with only two nodes in your cluster.

Choose wisely the host to deploy garbd on, as it will receive all replicated data. Make sure the network can handle the traffic and is secure enough. You could choose one of the HAProxy or ProxySQL hosts to deploy garbd on, like in the example below:

After installing garbd, you will see it appear next to your two Galera nodes:

We showed you how to make your MySQL master-slave and Galera cluster setups more robust and retain high availability using HAProxy and ProxySQL. Also garbd is a nice daemon that can save the extra third node in your Galera cluster.

This finalizes the deployment side of ClusterControl. In our next blog, we will show you how to integrate ClusterControl within your organization by using groups and assigning certain roles to users.