Twitter, GitHub, Pinterest, Snapchat, Craigslist, StackOverflow and Flickr just to name a few are the companies that are adopting Redis either for their storage or as a cache to boost performance. Redis is an in-memory data structure store that can be used as a database, cache, message broker and an open-source (BSD licensed). The word Redis is derived from REmote Dictionary Server.

The history of Redis begins in 2009 when Salvatore Sanfilippo, the original author of Redis, encountered significant obstacles in scaling some types of workloads using traditional database systems. This issue started to become famous and get more interest after he announced the project on Hacker News.

In this blog post, we will go through the steps to install Redis, setup and configuration.

Redis is written in ANSI C and runs in most POSIX systems like Linux, BSD, and OS X, with no external dependencies required. Moreover, Redis supports data structures like strings, hashes, lists, sets, and sorted sets with range queries, bitmaps, hyperloglogs, also geospatial indexes with radius queries. Let’s take a look at the top 5 benefits of using Redis with some details:

How To Install Redis Using Source

For simplification, we will install and run Redis in a standalone server without any high availability setup. If you are interested in high availability using Redis Sentinel, we recommend learning more about that in this blog post.

While you could install Redis using the package manager of your Linux distribution, nevertheless, this approach is discouraged to avoid installing an outdated version. The best way to install Redis is by compiling it from sources as they have no dependencies. The only prerequisites are a GCC compiler for your system and libc. In this example, we will install Redis on a Ubuntu 20.04 server.

As mentioned before, we need GCC and libc to compile the source code. Since our test system does not have those packages yet, we will proceed to install them first by executing the following command. Typically it will take a while considering there are a lot of packages to be installed:

Now let’s go ahead and download the tarball – we will use the second option to download it since this is the easier way to do it. Once the tarball is ready and we may proceed to extract the file:

The next 2 steps are to navigate into the extracted directory and run the compiler.

If you run the compilation without installing GCC and libc packages, the following error will appear:

To fix the error, you may simply run the following command. If there is no error, the command does not need to be executed:

Once the compilation is complete, you should see the message that suggests running “make test” like below. This is an optional step however we recommend doing so to make sure the previous process ran properly. The final step is to execute the following command to make sure “redis-server” and “redis-cli” are moved to the correct directory:

We may verify all Redis files are moved to that directory:

To start Redis, simply type “redis-server” and you will see the welcome message as follows: 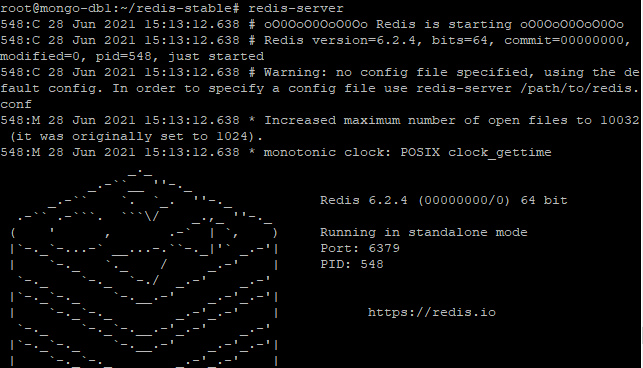 How To Make Redis Application Friendly

It’s worth mentioning that the installation that we went through just now is only suitable for the purpose of testing and development. In order for us to make Redis more application friendly, we could either run Redis using “screen” or do a proper install using an init script (the most suggested option). In this section, we will go through the steps on how to configure init script for Redis providing both “redis-server” and “redis-cli” already copied to /usr/local/bin

The first step is to create the following directory to store your Redis config files:

Copy the init script that is available in the “utils” directory (from the previously extracted tarball) into /etc/init.d. The best suggestion for the name is by calling it with the port number for Redis. For our case, since we are using a default port, we can use the following:

Copy the template configuration file that is available in the root directory of our extracted distribution tarball into /etc/redis/ and preferably use the port number as a name:

Now, create the following directory inside /var/redis. This directory will work as the data and working directory for our Redis instance:

We need to make some adjustments on the configuration file to the following parameters (this is important):

The last step is to add our Redis init script to all default runlevels with the following command and start our instance. Test with redis-cli to make sure it’s running properly:

In the event that you are not able to get the Redis instance running, you may troubleshoot the error from the log that you set (for example /var/log/redis_6379.log). However, the log name is probably different if you use other names than the default.