Every database system has a structured component which is responsible for maintaining how data is stored and served both in memory and disk. This is often referred to as a storage engine. More often when evaluating the architecture of operational databases, developers put into the account on first-hand factors such as data modeling, reduced latency, improved throughput operations, data consistency, scalability easiness, and minimal fault tolerance. In spite of that, one needs to have a detailed and advanced knowledge on the underlying storage engine for a better tuning so that it delivers on the highlighted factors efficiently. 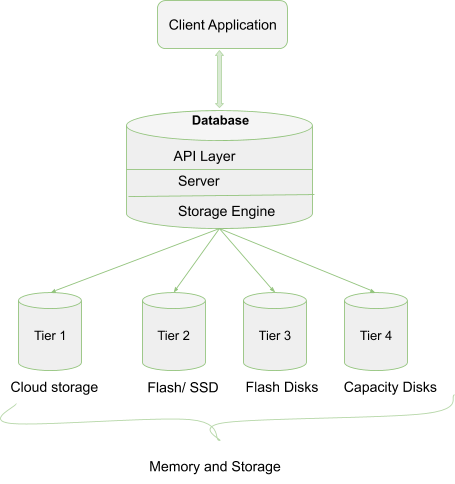 This is one of the ancient storage engines from which other sophisticated setups are derived from. It is a self-balancing tree data structure that ensures data sorting and enables searches, sequential access, insertions and deletes in a logarithmic manner. It is row-based storage such that each row is considered as being a single record in the database

Merits of a B-Tree Storage Engine

Limitations of a B-Tree storage engine

Because of the poor write performance of the B-Tree Based Engine, developers had to come up with a way to cope with larger datasets to DBMS. The Log Structured Merge Tree Based Engine (LSM Tree) was hence established to improve performance for indexed access to files with high write volume over an extended period. In this case, random writes at the first stage of cascading memory are turned into sequential writes at the disk-based first component.

Limitations of a B-Tree storage engine

Consume more memory as compared to B-Tree during read operations due to read and space amplification. However, some approaches such as bloom filters have mitigated this effect in practice such that the number of files to be checked during a point query is reduced.

The WiredTiger technology was designed in a way to employ both B-Tree and LSM advantages making it sophisticated and the best storage engine for MongoDB. IT is actually MongoDB’s default storage engine.

As mentioned above, it involves the concept of two basic storage engines that is the B-Tree and LSM Tree engines hence it is a multiversion concurrency control (MVCC) storage engine. The merits of the two combined enable the system see a snapshot of the database at the time it accesses a collection. Checkpoints are established such that a consistent view of data is recorded to disk between checkpoints. In case of a crash between checkpoints, it is easy to recover with these checkpoints or rather, even if there are no checkpoints for data, one can recover it from disk journal files.

Extensive usage of cache rather than disk to enhance low latency. WiredTiger storage engine relies heavily on the OS page-cache such that compressed data is fetched without involving the disk. Besides, the least recently used data is cleared from the RAM preserving more space for the cache.

B-Tree storage concept offers highly efficient reads and good write performance with low CPU utilization. It also has a document-level locking implementation that enables highly concurrent workloads and this concurrency consequently facilitates the server to take advantage of many core CPUs. In general, all theses enhances the high scalability of the database.

The enterprise edition supports on-disk encryption for the WiredTiger storage engine which is a feature that greatly improves data security.

Advantages of the WiredTiger Storage Engine

Difficulties in updating data. The concurrency scheme prevents in-place updates such that updating a field value in a document re-writes the entire document.