Our latest release of ClusterControl turns some of the most troublesome MongoDB tasks into a mere 15 second job. New features have been added to give you more control over your cluster and perform topology changes:

We will describe these added features in depth below.

Convert a MongoDB ReplicaSet to a Sharded MongoDB Cluster

As most MongoDB users will start off with a replicaSet to store their database, this is the most frequently used type of cluster. If you happen to run into scaling issues you can scale this replicaSet by either adding more secondaries or scaling out by sharding. You can convert an existing replicaSet into a sharded cluster, however this is a long process where you could easily make errors. In ClusterControl we have automated this process, where we automatically add the Configservers, shard routers and enable sharding.

To convert a replicaSet into a sharded cluster, you can simply trigger it via the actions drop down:

This will open up a two step dialogue on how to convert this into a shard. The first step is to define where to deploy the Configserver and shard routers to: 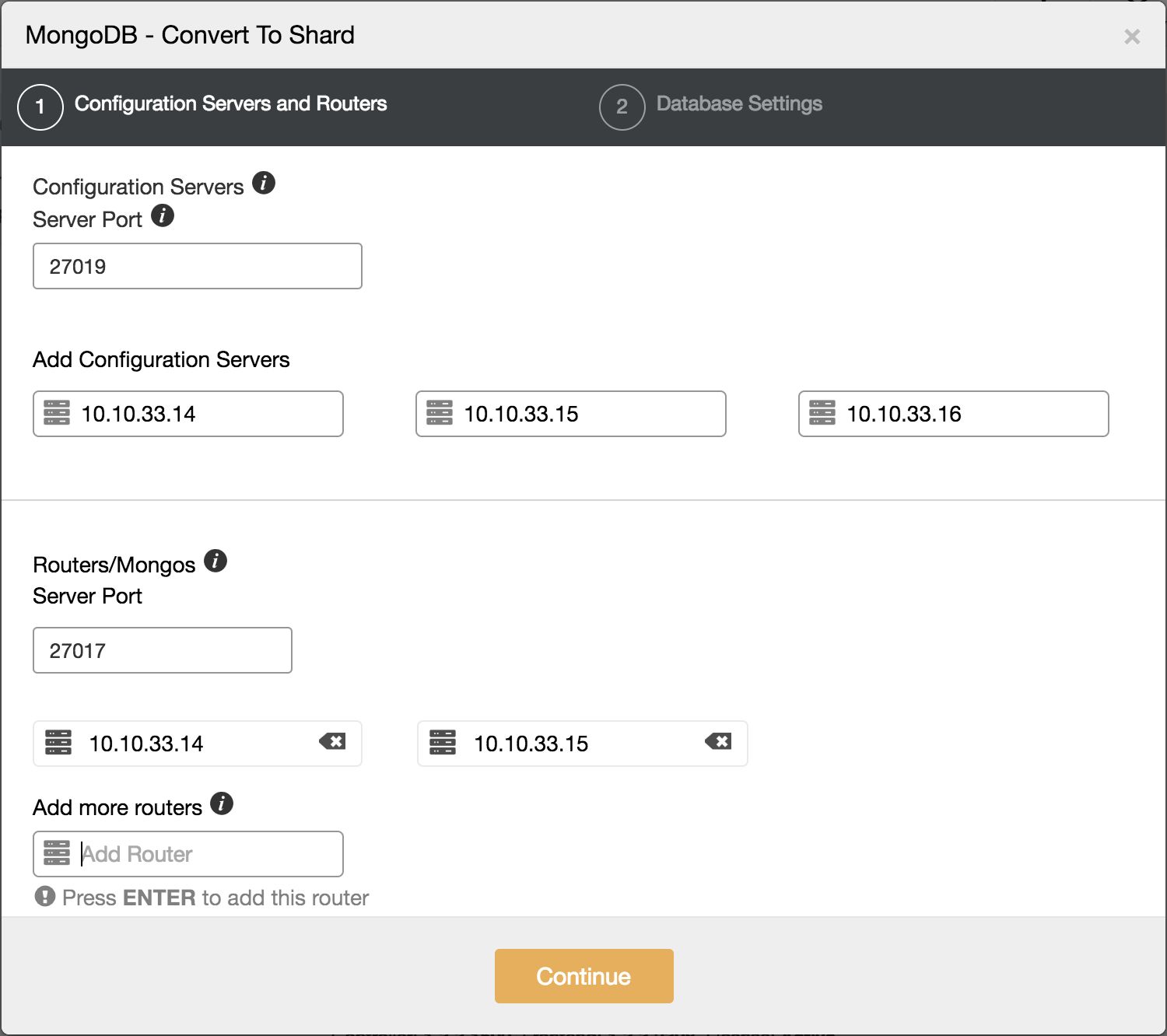 The second step is where to store the data and which config files should be used for the Configserver and shard router. 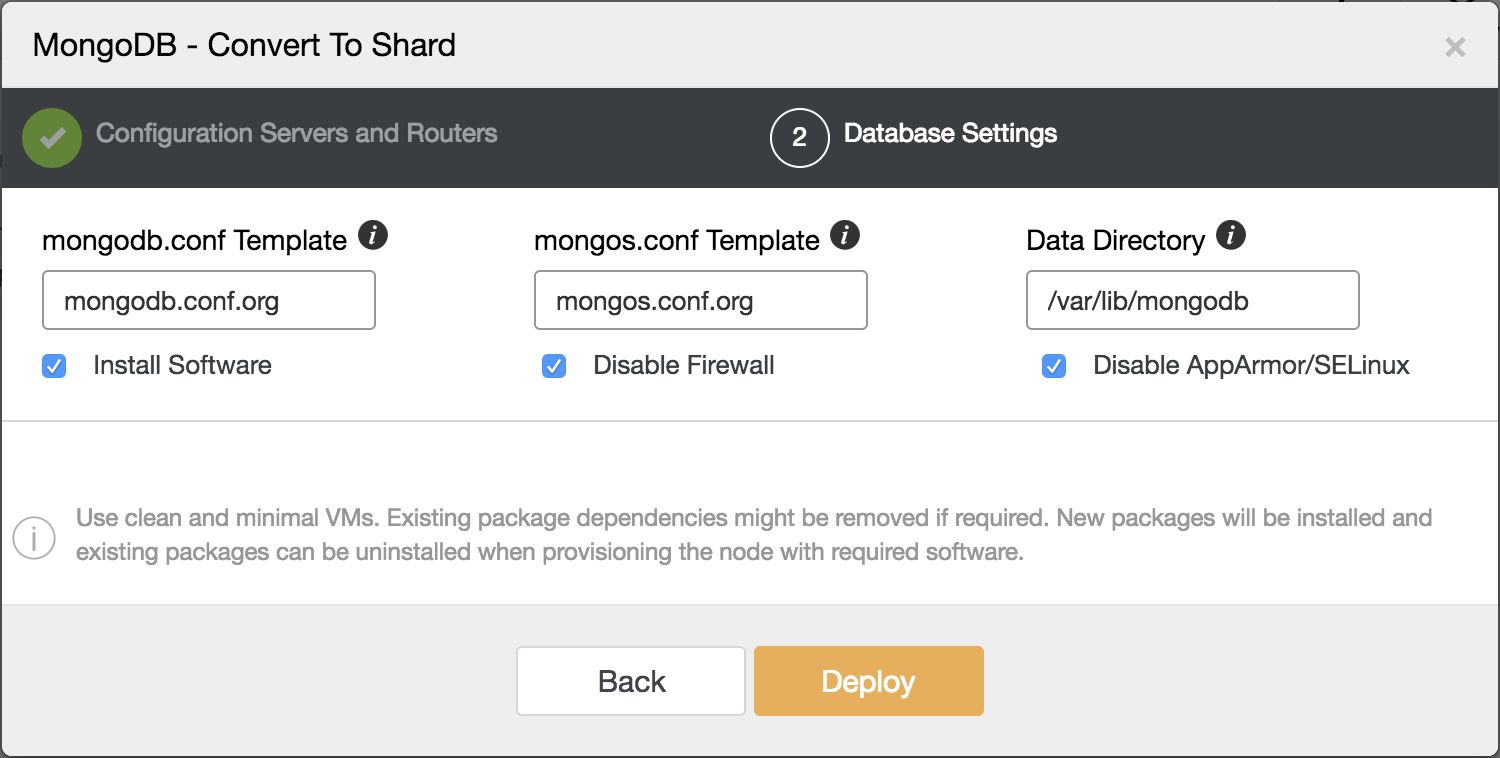 After the shard migration job has finished, the cluster overview now displays shards instead of replicaSet instances:

After converting to a sharded cluster, new shards can be added.

Add or Remove Shards from a Sharded MongoDB Cluster

From the ClusterControl UI, you can easily add new shards with a two step wizard, opened from the actions drop down: 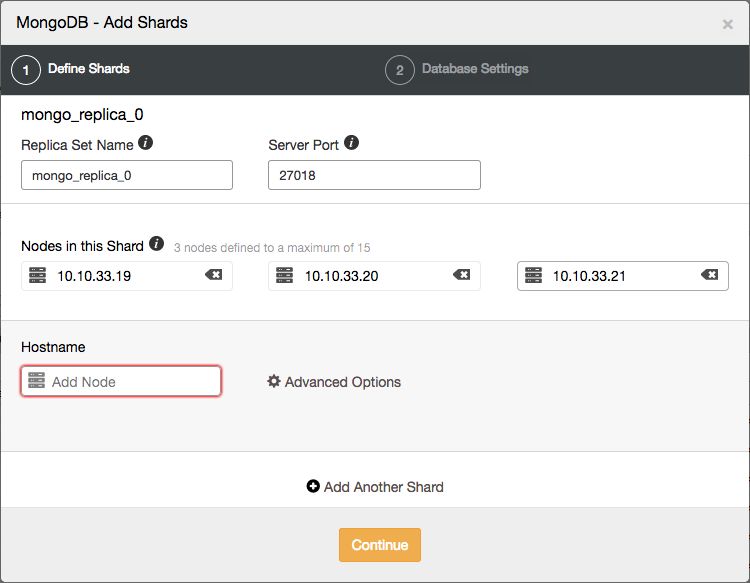 Here you can define the topology of the new shard. 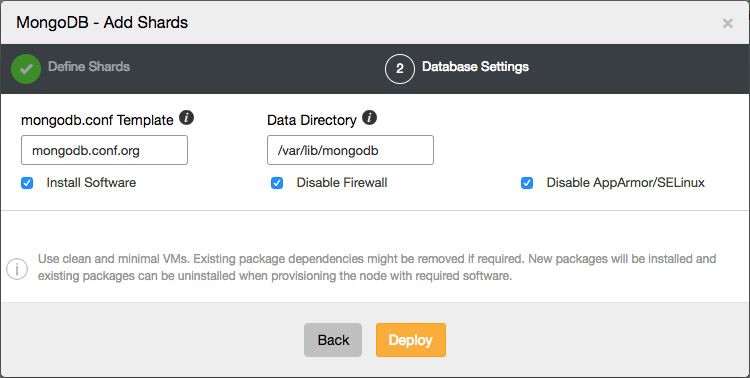 Once the new shard has been added to the cluster, the MongoDB shard router will start to assign new chunks to it, and the balancer will automatically balance all chunks over all the shards.

Removing shards is a bit harder than to add a shard, as this involves moving the data to the other shards before removing the shard itself. For all data that has been sharded over all shards, this will be a job performed by the MongoDB balancer.

In ClusterControl you can simply remove them via the actions drop down:

The job that removes the shard will then perform similar actions as described earlier: it will move any primary databases to the designated shard, enable the balancer and then wait for it to move all data from the shard.

Once all the data has been removed, it will remove the shard from the UI.

Once you start to scale out your application using a MongoDB sharded cluster, you may find you are in need of additional shard routers.

Adding additional MongoDB shard routers is a very simple process with ClusterControl, just open the Add Node dialogue from the actions drop down: 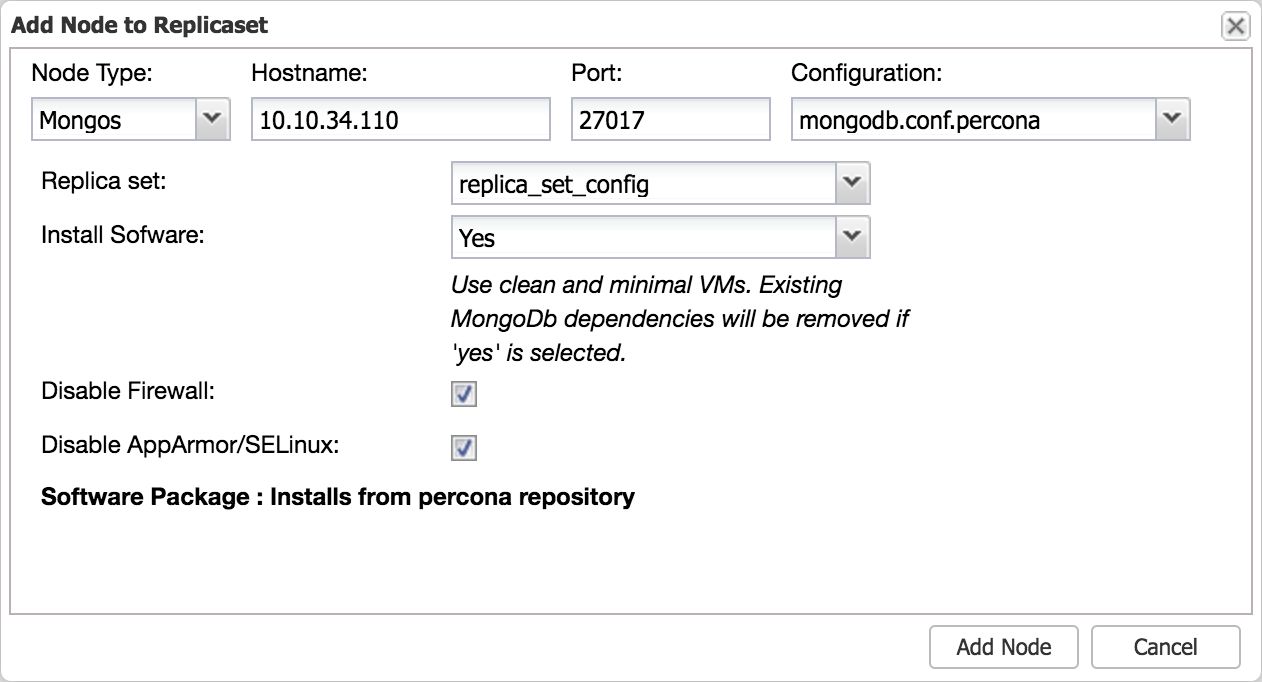 This will add a new shard router to the cluster. Don’t forget to set the proper default port (27017) on the router.

In case you wish to perform maintenance on the primary node in a replicaSet, it is better to have it first “step down” in a graceful manner before taking it offline. Stepping down a primary basically means the host stops being a primary and becomes a secondary and is not eligible to become a primary for a set number of seconds. The nodes in the MongoDB replicaSet with voting power, will elect a new primary with the stepped down primary excluded for the set number of seconds.

In ClusterControl we have added the step down functionality as an action on the Nodes page. To step down, simply select this as an action from the drop down:

After setting the number of seconds for stepdown and confirming, the primary will step down and a new primary will be elected. 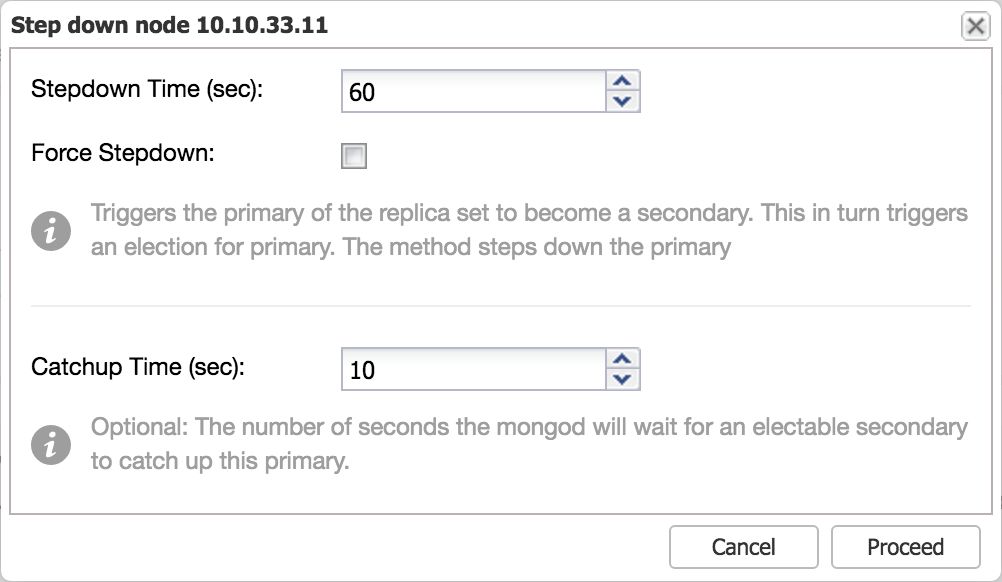 In ClusterControl we have added the freeze node functionality as an action on the Nodes page. To freeze a node, simply select this as an action from the drop down:

Replication lag is very important to keep an eye on, if you are scaling out reads via adding more secondaries. MongoDB will only use these secondaries if they don’t lag too far behind. If the secondary has replication lag, you risk serving out stale data that already has been overwritten on the primary.

We have implemented this check into an advisor in ClusterControl, to ensure your replication lag will always be watched over.

Just like the replication lag, the replication window is an equally important metric to look at. The lag advisor already informs us of the number of seconds a secondary node is behind the primary/master. As the oplog is limited in size, having slave lag imposes the following risks:

If we would have a secondary node lagging behind by a few minutes (or hours), it would be useful to have an advisor that informs us how much time we have left before our next transaction will be dropped from the oplog. The time difference between the first and last entry in the oplog is called the Replication Window. This metric can be created by fetching the first and last items from the oplog, and calculating the difference of their timestamps.

In the MongoDB shell, there is already a function available that calculates the replication window for you. However this function is built into the command line shell, so any outside connection not using the command line shell will not have this built-in function. Therefore we have made an advisor that will watch over the replication window and alerts you if you exceed a pre-set threshold.

Non-sharded databases and collections will be assigned to a default primary shard by the MongoDB shard router. This means the database or collection is limited to the size of this primary shard, and if written to in large volumes, could use up all remaining disk space of a shard. Once this happens the shard will obviously no longer function. Therefore it is important to watch over all existing databases and collections, and scan the config database to validate that they have been enabled for sharding.

We have made a big step by adding all the improvements to ClusterControl for MongoDB replicaSets and sharded clusters. This improves the usability for MongoDB greatly, and allows DBAs, sysops and devops to maintain their clusters even better!