There can be two ways of database load balancer topology:

In a centralized setup, a reverse proxy is located in between the data and presentation tier, as represented by the following diagram:

To eliminate a single-point-of-failure, one has to set up two or more load balancer nodes for redundancy purposes. If your application can handle multiple database endpoints, for example, the application or database driver is capable of performing health checks if the load balancer is healthy for query processing, you probably can skip the virtual IP address part. Otherwise, both load balancer nodes should be tied together with a common hostname or virtual IP address, to provide transparency to the database clients where it just needs to use a single database endpoint to access the data tier. Using DNS or host mapping is also possible if you want to skip using virtual IP addresses.

This tier-based approach is far simpler to manage because of its independent static host placement. It’s very unlikely for the load balancer tier to be scaled out (adding more nodes) because of its solid foundation in resiliency, redundancy and transparency to the application tier. You probably need to scale the host up (adding more resources to the host), which commonly will happen long away in the future, after the load balancer workloads have become more demanding as your business grows.

This topology requires an additional tier and hosts, which might be costly in a bare-metal infrastructure with physical servers. This setup is easier to manage in a cloud or virtual environment, where you have the flexibility to add an additional tier between the application and database tier, without costing you too much on the physical infrastructure cost like electricity, rack space and networking costs.

In a distributed topology setup, the load balancers are co-located within the presentation tier (application or web servers), as simplified by the following diagram: 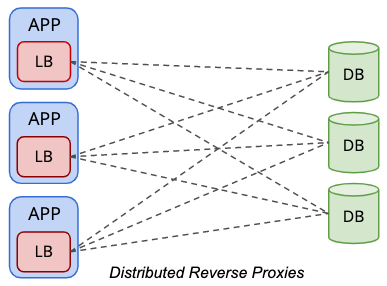 One of the advantages of running in this topology is that you don’t need extra hosts for load balancing purposes. By combining the load balancer tier within the presentation tier, we could save at least two hosts. In a bare-metal environment, this topology could potentially save you a lot of money throughout the years. Generally, load balancer workload is far less demanding if compared to database or application workloads, which makes it justifiable to share the same hardware resources with the applications.

With the help of IT infrastructure automation tools like Chef, Puppet and Ansible together with the container orchestration tools, it is no longer an impossible task to automate the deployment and management of multiple load balancer instances for this topology. However, there will be another learning curve for the operation team to come up with a battle-tested, production-grade deployment and management policies to reduce the excessive work when handling many load balancer nodes. Don’t miss out on all the important management aspects for database load balancer like backup/restore, upgrade/downgrade, configuration management, service control, fault management and so on.

Distributed topology can be mixed together with the centralized topology for some supported database load balancers like ProxySQL, as illustrated in the following diagram:

However, this requires two versions of load balancer configurations – one that resides on the application tier, and another one resides on the load balancer tiers. It also requires more hosts, excluding the need to learn about virtual IP address technology, IP failover and so on. The advantages and disadvantages of both distributed and centralized setups are fusion together in this topology.

Each topology has its own advantages and disadvantages and must be well-planned from the beginning. This early decision is critical and can hugely influence your application performance, scalability, reliability and availability in the long run.