One of the primary requirements for any database is to achieve scalability. It can only be achieved if the contention (locking) is minimized as much as possible, if not removed all together. As read / write / update / delete being some of the major frequent operations happening in the database so it is very important for these operations to go on concurrently without getting blocked. In order to achieve this, most of the major databases employ a concurrency model called Multi-Version Concurrency Control, which reduces contention to a bare minimum level.

Multi Version Concurrency Control (here onwards MVCC) is an algorithm to provide fine concurrency control by maintaining multiple versions of the same object so that READ and WRITE operation do not conflict. Here WRITE means UPDATE and DELETE, as newly INSERTed record anyway will be protected as per isolation level. Each WRITE operation produces a new version of the object and each concurrent read operation reads a different version of the object depending on the isolation level. Since read and write both operating on different versions of the same object so none of these operations required to completely lock and hence both can operate concurrently. The only case where the contention can still exist is when two concurrent transaction tries to WRITE the same record.

Most of the current major database supports MVCC. The intention of this algorithm is maintaining multiple versions of the same object so the implementation of MVCC differs from database to database only in terms of how multiple versions are created and maintained. Accordingly, corresponding database operation and storage of data changes.

Most recognized approach to implements MVCC is the one used by PostgreSQL and Firebird/Interbase and another one is used by InnoDB and Oracle. In subsequent sections, we will discuss in detail how it has been implemented in PostgreSQL and InnoDB.

In order to support multiple versions, PostgreSQL maintains additional fields for each object (Tuple in PostgreSQL terminology) as mentioned below:

PostgreSQL stores all data in a primary storage called HEAP (page of by default size 8KB). All the new tuple gets xmin as a transaction which created it and and older version tuple (which got updated or deleted) gets assigned with xmax. There is always a link from the older version tuple to the new version. The older version tuple can be used to recreate the tuple in case of rollback and for reading an older version of a tuple by READ statement depending on the isolation level.

Consider there are two tuples, T1 (with value 1) and T2 (with value 2) for a table, the creation of new rows can be demonstrated in below 3 steps: 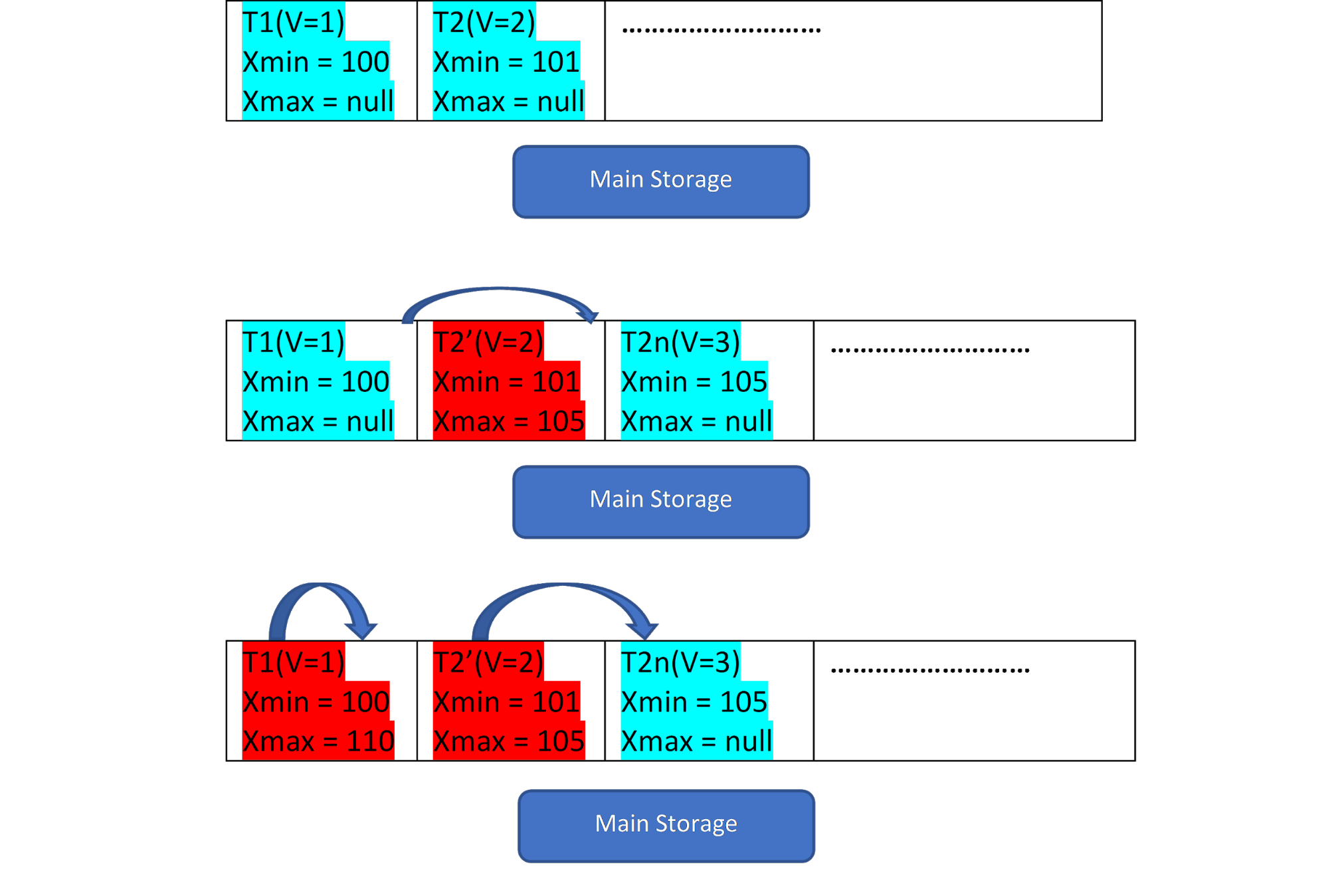 As seen from the picture, initially there are two tuples in the database with values 1 and 2.

Then, in as per second step, the row T2 with value 2 gets updated with the value 3. At this point, a new version is created with the new value and it just gets stored as next to the existing tuple in the same storage area. Before that, the older version gets assigned with xmax and points to latest version tuple.

Similarly, in the third step, when the row T1 with value 1 gets deleted, then, the existing row gets virtually deleted (i.e. it just assigned xmax with the current transaction) in the same place. No new version gets created for this.

Next, let’s see how each operation creates multiple versions and how the transaction isolation level maintained without locking with some real examples. In all the below example by default “READ COMMITTED” isolation is used.

Every time a record gets inserted, it will create a new tuple, which gets added to one of the pages belonging to the corresponding table.

As we can see here stepwise:

PostgreSQL UPDATE is not “IN-PLACE” update i.e. it does not modify the existing object with the required new value. Instead, it creates a new version of the object. So, UPDATE broadly involves the steps below:

So even though a number of records remain the same, HEAP takes space as if one more record got inserted.

As we can see here stepwise:

Delete is almost like UPDATE operation except it does not have to add a new version. It just marks the current object as DELETED as explain in UPDATE case.

Now, let’s see how SELECT query gets executed on a tuple having multiple versions: SELECT needs to read all versions of tuple till it finds the appropriate tuple as per isolation level. Suppose there was tuple T1, which got updated and created new version T1’ and which in turn created T1’’ on update:

As we can see, it needs to traverse through all 3 versions of the tuple in order to find the appropriate visible tuple till expired tuple gets deleted by the garbage collector (VACUUM).

In order to support multiple versions, InnoDB maintains additional fields for each row as mentioned below:

Like PostgreSQL, InnoDB also creates multiple versions of the row as part of all operation but the storage of the older version is different.

Consider there are two rows, T1 (with value 1) and T2 (with value 2) for a table, the creation of new rows can be demonstrated in below 3 steps: 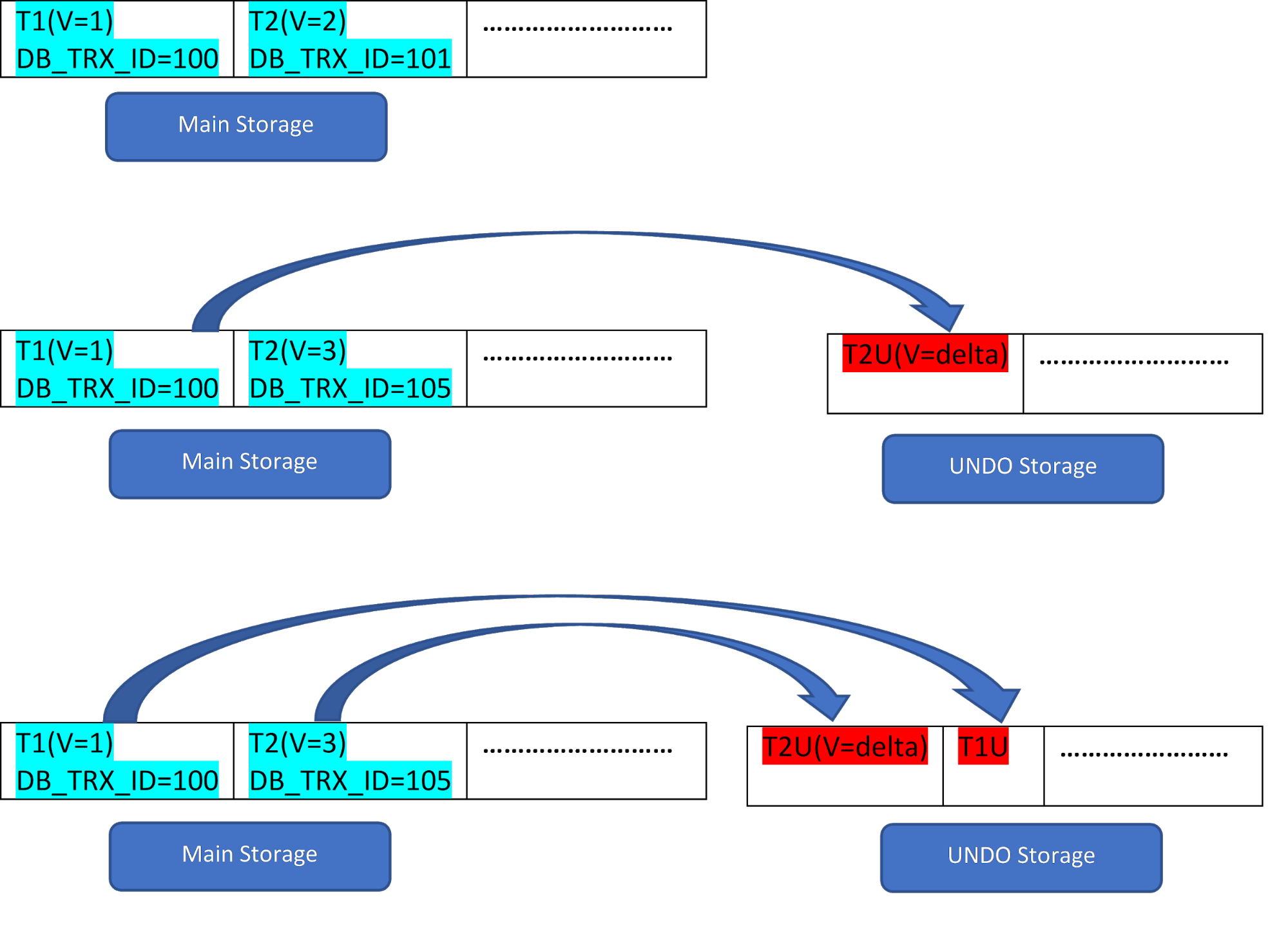 As seen from the figure, initially there are two rows in the database with values 1 and 2.

Similarly, in the third step, when row T1 with value 1 gets deleted, then the existing row gets virtually deleted (i.e. it just marks a special bit in the row) in the main storage area and a new version corresponding to this gets added in the Undo segment. Again, there is one roll pointer from the main storage to the undo segment.

All operations behave in the same way as in the case of PostgreSQL when seen from outside. Just internal storage of multiple version differs.

Now, let’s analyze what are the major differences between PostgreSQL and InnoDB in terms of their MVCC implementation:

PostgreSQL MVCC has got few drawbacks especially in terms of bloated storage if your workload has frequent UPDATE/DELETE. So if you decide to use PostgreSQL you should be very careful to configure VACUUM wisely.

PostgreSQL community has also acknowledged this as a major issue and they have already started working on UNDO based MVCC approach (tentative name as ZHEAP) and we might see the same in a future release.