If you are a frequent user of ClusterControl, you might have heard that the Severalnines team recently released ClusterControl version 1.9.0. The full changelog can be found here, but in this blog post, we are going to highlight some of the new features we introduced with this version. Excited yet? Let’s get rolling!

ClusterControl 1.9.0 (or 1.9 for short) is the latest major version release of the AI-driven database automation platform. The highlight of this version is the support for high-availability Redis. The Severalnines team has also introduced an enhanced query monitoring implementation, providing even better insights into your database performance.

A deeper dive into what’s new

Now that we have got you hooked and you know some of the things that ClusterControl 1.9 entails, we should dive deeper, shouldn’t we? In a nutshell, here’s what new in ClusterControl 1.9 – it all comes down to a few improvements in the Redis, PostgreSQL, and query monitoring space:

Users can now deploy Redis v5, v6 nodes with Sentinels – ClusterControl supports one primary and up to five replicas. You can  find out how to deploy Redis nodes from our next generation web application here.

PostgreSQL pgBackRest has been overhauled

And one more thing: you can now upload backups to any cloud storage provider that is compliant with the AWS S3 API!

What’s on the horizon? ClusterControl’s next generation web application

There’s no doubt – ClusterControl 1.9 gives your database instances more power than it ever did before. But the Severalnines team is also working on improvements to CC’s web application. Here’s a quick sneak peek: 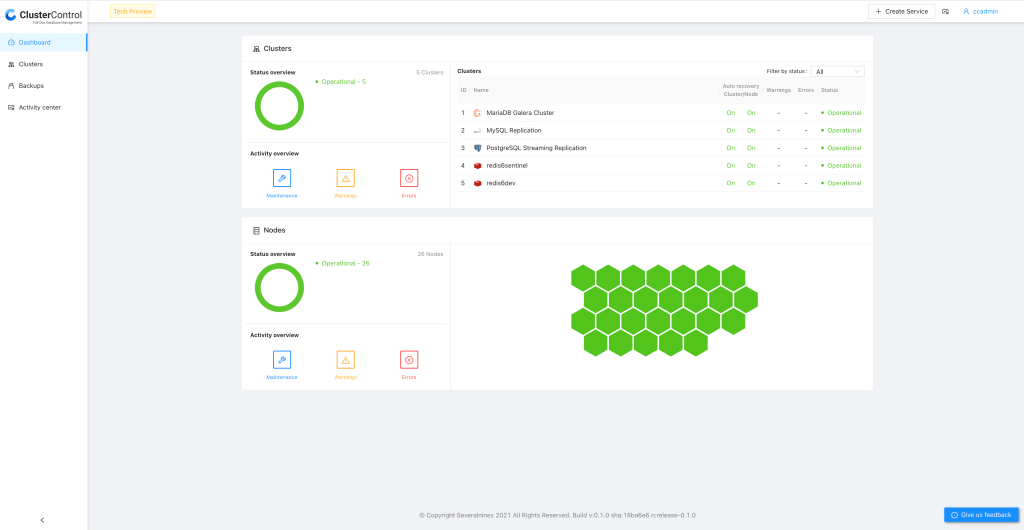 The new web application, v2, is being built on a modern framework that’ll extend the CC web interface’s functionality. It’s current preview is where you’ll be able to deploy Redis Sentinel clusters. Upcoming improvements will include the addition of management operations for MySQL Replication, Galera, and NDB, PG, and MongoDB, e.g. deployment, imports and backup operations, as well as other functionality, e.g. global filtering. It’s simple to access and switch between v1 and 2, so check out how to access here!

As you see, CC 1.9.0 is chock-full of feature enhancements that take its capabilities to the next level, including the introduction of Redis as a database option. Remember to check out our changelog to get the details on everything we’ve done since its initial release. For those already using ClusterControl, here is how you get the latest version. Not a ClusterControl customer yet? Try it free for 30 days. Otherwise, stay up-to-date by subscribing to our RSS feed or following us on Twitter. See you in the next blog!