Our journey in adopting MySQL and MariaDB in containerized environments continues, with ClusterControl coming into the picture to facilitate deployment and management. We already have our ClusterControl image hosted in Docker Hub, where it can deploy different replication/cluster topologies on multiple containers. With the introduction of Docker Swarm, a native orchestration tools embedded inside Docker Engine, scaling and provisioning containers has become much easier. It also has high availability covered by running services on multiple Docker hosts.

In this blog post, we’ll be experimenting with automatic provisioning of Galera Cluster on Docker Swarm with ClusterControl. ClusterControl would usually deploy database clusters on bare-metal, virtual machines and cloud instances. ClusterControl relies on SSH (through libssh) as core communication module to connect to the managed hosts, so these would not require any agents. The same rule can be applied to containers, and that’s what we are going to show in this blog post.

We have built a Docker image with extended logic to handle deployment in container environments in a semi-automatic way. The image is now available on Docker Hub and the code is hosted in our Github repository. Please note that only this image is capable of deploying on containers, and is not available in the standard ClusterControl installation packages.

The extended logic is inside deploy-container.sh, a script that monitors a custom table inside CMON database called “cmon.containers”. The created database container shall report and register itself into this table and this script will look for new entries and perform the necessary action using a ClusterControl CLI. The deployment is automatic, and you can monitor the progress directly from the ClusterControl UI or using “docker logs” command.

Before we go further, take note of some prerequisites for running ClusterControl and Galera Cluster on Docker Swarm:

To run ClusterControl as a service using “docker stack”, the following definition should be enough:

Or, you can use the “docker service” command as per below:

Or, you can combine the ClusterControl service together with the database container service and form a “stack” in a compose file as shown in the next section.

Base Containers as Docker Swarm Service

The base container’s image called “centos-ssh” is based on CentOS 6 image. It comes with a couple of basic packages like SSH server, clients, curl and mysql client. The entrypoint script will download ClusterControl’s public key for passwordless SSH during startup. It will also register itself to the ClusterControl’s CMON database for automatic deployment.

Running this container requires a couple of environment variables to be set:

To run the container, simply use the following stack definition in a compose file:

By combining them both (ClusterControl and database base containers), we can just deploy them under a single stack as per below:

Save the above lines into a file, for example docker-compose.yml in the current directory. Then, start the deployment:

Wait for a Galera Cluster to be ready

The deployment will be automatically picked up by the ClusterControl CLI. So you basically don’t have to do anything but wait. The deployment usually takes around 10 to 20 minutes depending on the network connection.

Open the ClusterControl UI at http://{any_Docker_host}:5000/clustercontrol, fill in the default administrator user details and log in. Monitor the deployment progress under Activity -> Jobs, as shown in the following screenshot: 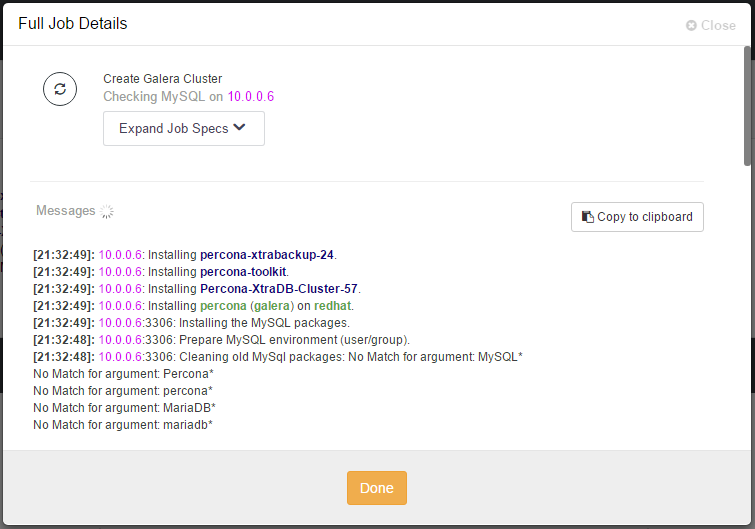 Or, you can look at the progress directly from the docker logs command of the ClusterControl container:

That’s it. Wait until the deployment completes and you will then be all set with a three-node Galera Cluster running on Docker Swarm, as shown in the following screenshot:

In ClusterControl, it has the same look and feel as what you have seen with Galera running on standard hosts (non-container) environment.

Connecting to the Cluster

To verify the status of the replicas and service name, run the following command:

If the application/client is running on the same Swarm network space, you can connect to it directly via the service name endpoint. If not, use the routing mesh by connecting to the published port (3306) on any of the Docker Swarm nodes. The connection to these endpoints will be load balanced automatically by Docker Swarm in a round-robin fashion.

Typically, when adding a new database, we need to prepare a new host with base operating system together with passwordless SSH. In Docker Swarm, you just need to scale out the service using the following command to the number of replicas that you desire:

ClusterControl will then pick up the new containers registered inside cmon.containers table and trigger add node jobs, for one container at a time. You can look at the progress under Activity -> Jobs: 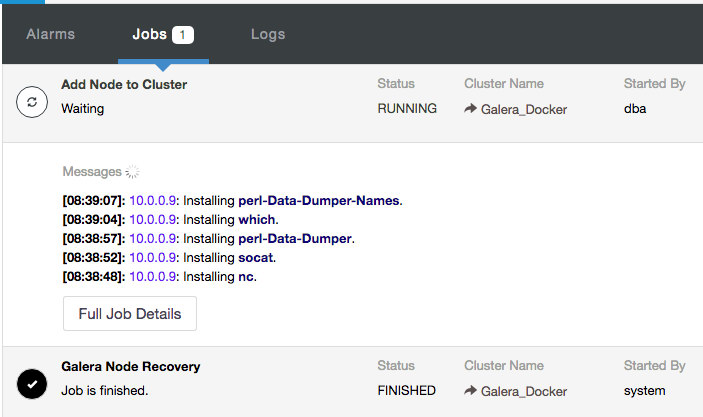 Scaling down is similar, by using the “service scale” command. However, ClusterControl doesn’t know whether the containers that have been removed by Docker Swarm were part of the auto-scheduling or just a scale down (which indicates that we deliberately wanted the containers to be removed). Thus, to scale down from 5 nodes to 3 nodes, one would:

Then, remove the stopped hosts from the ClusterControl UI by going to Nodes -> rollover the removed container -> click on the ‘X’ icon on the top right -> Confirm & Remove Node: 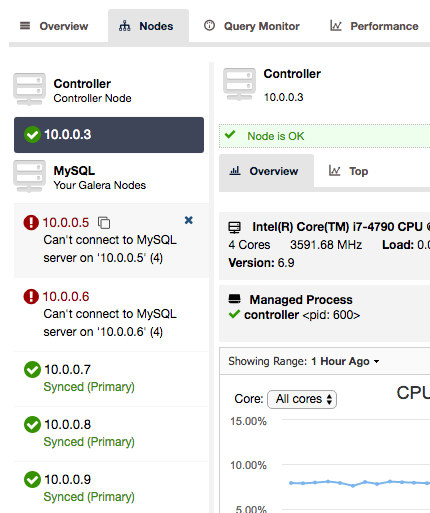 ClusterControl will then execute a remove node job and bring back the cluster to the expected size.

In case of container failure, Docker Swarm automatic rescheduling will kick in and there will be a new replacement container with the same IP address as the old one (with different container ID). ClusterControl will then start to provision this node from scratch, by performing the installation process, configuration and getting it to rejoin the cluster. The old container will be removed automatically from ClusterControl before the deployment starts.

Go ahead and try to kill one of the database containers:

You’ll see the new containers that Swarm created will be provisioned automatically by ClusterControl.

To create a new cluster, just create another service or stack with a different CLUSTER_NAME and service name. The following is an example that we want to create another Galera Cluster running on MariaDB 10.1 (some extra environment variables are required for MariaDB 10.1):

Then, create the service:

Go back to ClusterControl UI -> Activity -> Jobs and you should see a new deployment has started. After a couple of minutes, you will see the new cluster will be listed inside ClusterControl dashboard:

To remove everything (including the ClusterControl container), you just need to remove the stack created by Docker Swarm:

That’s it, the whole stack has been removed. Pretty neat huh? You can start all over again by running the “docker stack deploy” command and everything will be ready after a couple of minutes.

The flexibility you get by running a single command to deploy or destroy a whole environment can be useful in different types of use cases such as backup verification, DDL procedure testing, query performance tweaking, experimenting for proof-of-concepts and also for staging temporary data. These use cases are closer to developer environment. With this approach, you can now treat a stateful service “statelessly”.

Would you like to see ClusterControl manage the whole database container stack through the UI via point and click? Let us know your thoughts in the comments section below. In the next blog post, we are going to look at how to perform automatic backup verification on Galera Cluster using containers.