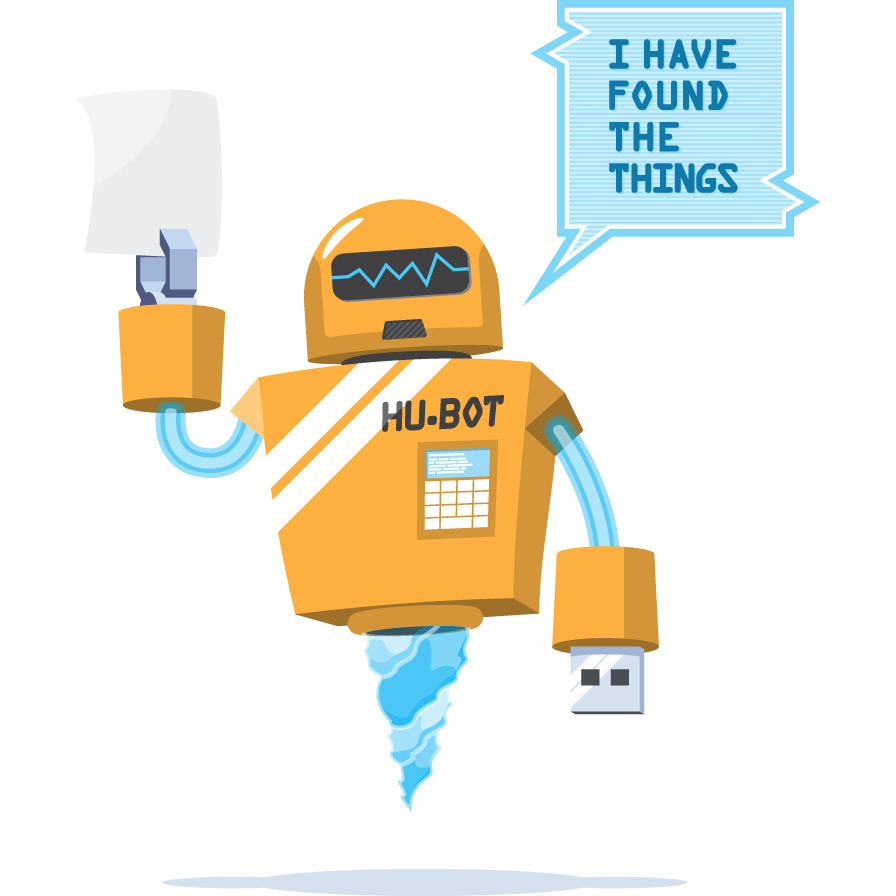 With our new ClusterControl 1.2.12 release we have added many new features like operational reports, enhanced backup options, SSL Encryption for Galera replication links and improved the support for external tools. One of these tools is CCBot, the ClusterControl chatbot.

CCBot is based on the popular Hubot framework originally created by Github. Github uses Hubot as their DevOps tools of choice and allowing them to do Continuous Integration and Continuous Delivery on their entire infrastructure. So what does Hubot allow you to do?

Hubot is a chatbot that has been modelled after Github’s internal bot called hubot. The Hubot framework allows you to quickly create your own bot and extend it with various pre made scripts and integrate it with many popular chat and messaging services.

Hubot is meant as a tool to help your team automate and operate at scale, like for instance when you are part of a DevOps team. You can give it a command and it will execute that command for you. For instance you could do code deployments, kick off continuous integrations, upgrade schemas using schema control, schedule backups and even scale infrastructure.

Not only is Hubot capable of executing tasks, it can also monitor systems for you. For instance if you create a post-commit hook that interfaces with Hubot you can alert all team members that someone just committed code. Take that one step further and you could even monitor your database servers.

Automating your Database with CCBot

CCBot is the Severalnines integration of ClusterControl in the Hubot framework and therefore supports most of the major chat services like Slack, Flowdock, Hipchat, Campfire, any XMPP based chat service and also IRC. We have tested and verified CCBot to work with Slack, Flowdock, Hipchat and Campfire. CCBot follows the philosophy of Severalnines by implementing the four pillars of ClusterControl: Deploy, Manage, Monitor and Scale.

The first release of CCBot covers the Manage and Monitor parts of ClusterControl, meaning CCBot will be able to keep your team up to date on the status of your clusters, jobs and backups. At the same time you can also create impromptu backups, read the last log lines of the MySQL error logs, schedule and create the daily reports.

There are two ways to integrate CCBot with Hubot: either as a standalone chatbot that operates from your ClusterControl host or if you already have a Hubot based chatbot in your company integrate it into your existing Hubot framework. The latter may need a bit of adjustments to your startup script.

Installing CCBot is only a few minutes of work. You can find our repository here:
https://github.com/severalnines/ccbot

In principle this should be relatively easy as you already have a working Hubot chatbot, thus only copying the source files to your chatbot and add the CCBot parameters would be sufficient to make it work.

Copy the following files from our ccbot repository to your existing Hubot instance in the respective directories:

Then add the following parameters in your Hubot startup script if necessary:

These variables will be picked up by the config.coffee file and used inside the cmonrpc calls.

For configuration of the HUBOT_CMONRPC_MSGROOM variable, see below in the standalone installation.

As of ClusterControl version 1.2.12 there is a change in binding address of the CMON RPC: by default it will bind to localhost (127.0.0.1) and if your existing Hubot chatbot is living on a different host you need to configure CMON to bind to another ip address as well. You can change this in the cmon default file (/etc/default/cmon):

Install CCBot as a standalone chatbot

Firstly we need to have the node.js framework installed. This can best be done by installing npm. This should install the necessary node.js packages as well and allow you to install additional modules via npm.

For security we create a separate hubot user to ensure Hubot itself can’t do anything outside running Hubot and create the directory to run Hubot from.

To install the Hubot framework from scratch follow the following procedure where the adapter is the chat service you are using (e.g. slack, hipchat, flowdock): 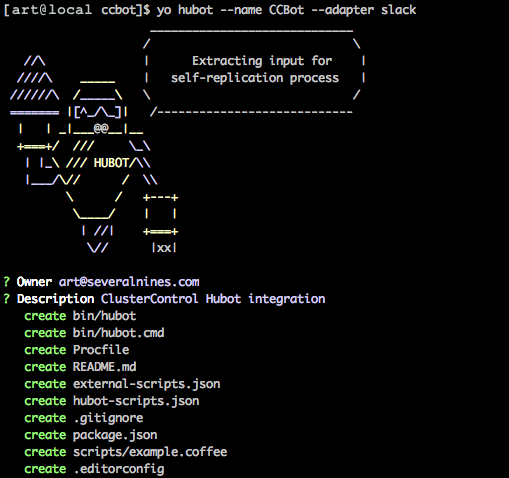 So if you are using, for instance, Slack as your chat provider you would need to provide “slack” as your adapter. A complete list of all the Hubot adapters can be found here:
https://hubot.github.com/docs/adapters/
Don’t forget to configure your adapter accordingly in the hubot startup script.

Also if you choose to change CCBot’s name keep in mind not to name the bot to Hubot: the Hubot framework attempts to create a module named exactly the same as the name you give to the bot. Since the framework is already named Hubot this will cause a non-descriptive error.

Copy the following files to the ccbot directory:

Obviously you can run Hubot in the background or a Screen session, but it would be much better if we can daemonize Hubot using proper start up scripts. We supply three startup scripts for CCBot: a traditional Linux Standard Base init script (start, stop, status), a systemd wrapper for this init script and a supervisord script.

For Redhat/Centos 6.x (and lower):

For systemd based systems:

For this step it is necessary to have supervisord installed on your system.

Then modify the following parameters in the Hubot environment script (/var/lib/hubot/hubot.env) or supervisord config if necessary:

The HUBOT_CMONRPC_MSGROOM variable contains the team’s room the chatbot has to send its messages to. For the chat services we tested this with it should be something like this:

You can operate Hubot by giving it commands in the chatroom. In principle it does not matter whether you issue to command in a general chatroom where Hubot is present or if it were in a private chat with the bot itself. Sending a command will be as following:

Where botname is the name of your Hubot bot, so if in our example Hubot is called “ccbot” and the command is “status” you would send the command be as following:

Note: when you are in a private chat with the chatbot you must omit the addressing of the bot.

Lists the clusters in ClusterControl and shows their status.

Schedules a full backup for an entire cluster using xtrabackup. Host is an optional parameter, if not provided CCBot will pick the first host from the cluster.

Schedules a backup for a single schema using mysqldump. Host is an optional parameter, if not provided CCBot will pick the first host from the cluster.

Creates an operational report for the given cluster

Lists all available reports for the given cluster

Returns the last log lines of the given cluster/host/filename.

As CCBot is meant to compliment the ClusterControl UI we will review what makes sense to put into a chatbot and what not. So far we have identified that adding schemas, users, scaling clusters and running (custom) advisors makes the most sense and we will continue to extend CCBot with that functionality in the upcoming months. Obviously if you have the urge and need to automate additional ClusterControl functions we are all ears.