MMAPv1 is a B-tree based system which powers many of the functions such as storage interaction and memory management to the operating system.

It was the default database for MongoDB for versions earlier than 3.2 until the introduction of the WiredTiger storage engine. Its name comes from the fact that it uses memory mapped files to access data. It does so by directly loading and modifying file contents, which are in a virtual memory through a mmap() syscall methodology.

All records are contiguously located on the disk and in the case that a document becomes larger than the allocated record size, then MongoDB allocates a new record. For MMAPv1 this is advantageous for sequential data access but at the same time a limitation as it comes with a time cost since all document indexes need to be updated and this may result to storage fragmentation.

The basic architecture of the MMAPv1 storage engine is shown below. 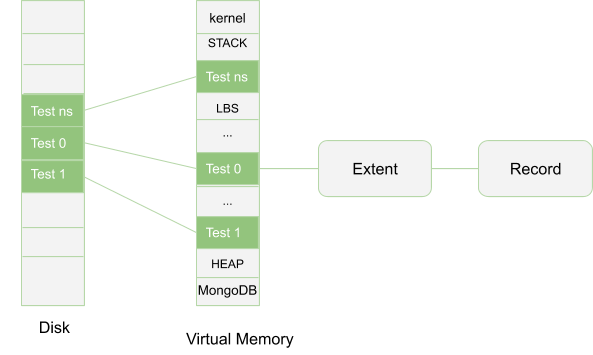 As mentioned above, if a document size surpasses the allocated record size, it will result to a reallocation which is not a good thing. To avoid this the MMAPv1 engine utilizes a Power of 2 Sized Allocation so that every document is stored in a record that contains the document itself (including some extra space known as padding). The padding is then used to allow for any document growth that may result from updates while it reduces the chances of reallocations. Otherwise, if reallocations occur you may end up having storage fragmentation. Padding trades additional space to improve on efficiency hence reducing fragmentation. For workloads with high volumes of inserts, updates or deletes, the power of 2 allocation should be most preferred whereas exact fit allocation is ideal fo collections that do not involve any update or delete workloads.

For smooth document growth, this strategy is employed in the MMAPv1 storage engine. Every record has a size in bytes which is a power of 2, i.e. (32, 64, 128, 256, 512…2MB). 2MB being the default larger limit any document that surpasses this, its memory is rounded to the nearest multiple of 2MB. For example, if a document is 200MB, this size will be rounded off to 256MB and 56MB trade of space will be available for any additional growth.This enables documents to grow instead of triggering a reallocation the system will need to make when documents reach their limits of available space.

All free memory on machine in the MMAPv1 storage engine is used as cache. Correctly sized working sets and optimal performance is achieved through a working set that fits into memory. Besides, for every 60 seconds, the MMAPv1 flushes changes to data to disk hence saving on the cache memory. This value can be changed such that the flushing may be done frequently. Because all free memory is used as cache, don’t be shocked that system resource monitoring tools will indicate that MongoDB uses a lot of memory since this usage is dynamic.

Limitations of the MMAPv1 Storage Engine

When coming to storage engine selection for a database, many people don’t know which one to choose. The choice normally relies on the workload that it will be subjected unto. On a general gauge, the MMAPv1 would make a poor choice and that’s why MongoDB made a lot of advancements to the WiredTiger option. However, it still may outdo some other storage engines depending on the use case for example where you need to perform only read workloads or need to store many separate collections with large documents whereby 1 or 2 fields are frequently updated.