Using a VPN connection is the most secure way to access a network if you are working remotely, but as this configuration could require hardware, time, and knowledge, you should probably want to know alternatives to do it. Using SSH is also a secure way to access a remote network without extra hardware, less time consuming, and less effort than configuring a VPN server. In this blog, we’ll see how to configure SSH Tunneling to access your databases in a secure way.

SSH (Secure SHell), is a program/protocol that allows you to access a remote host/network, run commands, or share information. You can configure different encrypted authentication methods and it uses the 22/TCP port by default, but it’s recommended changing it for security reasons.

How to Use SSH?

The most secure way to use it is by creating an SSH Key Pair. With this, you don’t only need to have the password but also the private key to be able to access the remote host.

Also, you should have a host with only the SSH server role, and keep it as isolated as possible, so in case of an external attack, it won’t affect your local servers. Something like this:

Let’s see first, how to configure the SSH server.

Most of the Linux Installation has SSH Server installed by default, but there are some cases where it could be missing (minimal ISO), so to install it, you just need to install the following packages:

Now you have the SSH Server installed, you can configure it to only accept connections using a key.

Make sure you change it after having the public key in place, otherwise you won’t be able to log in.

You can also change the port and deny root access to make it more secure:

You must check if the selected port is open in the firewall configuration to be able to access it.

This is a basic configuration. There are different parameters to change here to improve the SSH security, so you can follow the documentation for this task.

Now, let’s generate the key pair for the local user “remote” to access the SSH Server. There are different types of keys, in this case, we’ll generate an RSA key.

This will generate the following files in a directory called “.ssh” inside the user’s home directory:

The “id_rsa” file is the private key (keep it as secure as possible), and the “id_rsa.pub” is the public one that must be copied to the remote host to access it. For this, run the following command as the corresponding user:

In this example, I’m using the port 20022 for SSH, and my remote host is 35.166.37.12. I have also the same user (remote) created in both local and remote hosts. You can use another user in the remote host, so in that case, you should change the user to the correct one in the ssh-copy-id command:

This command will copy the public key to the authorized_keys file in the remote .ssh directory. So, in the SSH Server you should have this now:

Now, you should be able to access the remote host:

But this is not enough to access your database node, as you are in the SSH Server yet.

To access your database node you have two options. The classic way is, if you are in the SSH Server, you can access it from there as you are in the same network, but for this, you should open two or three connections.

First, the SSH connection established to the SSH Server:

Then, the SSH connection to the Database Node:

And finally, the database connection, that in case of MySQL, is:

But, this could be annoying as you used to use the database connection directly from your computer connected in the office, so let’s see how to use the SSH Tunneling for this.

Following the same example, we have:

So, if you run the following command in your local machine:

So, to make it more clear, after running this command, you can access the remote database node, running this in your local machine:

If you are using a graphic tool to manage databases, most probably it has the option to use SSH Tunneling to access the database node. 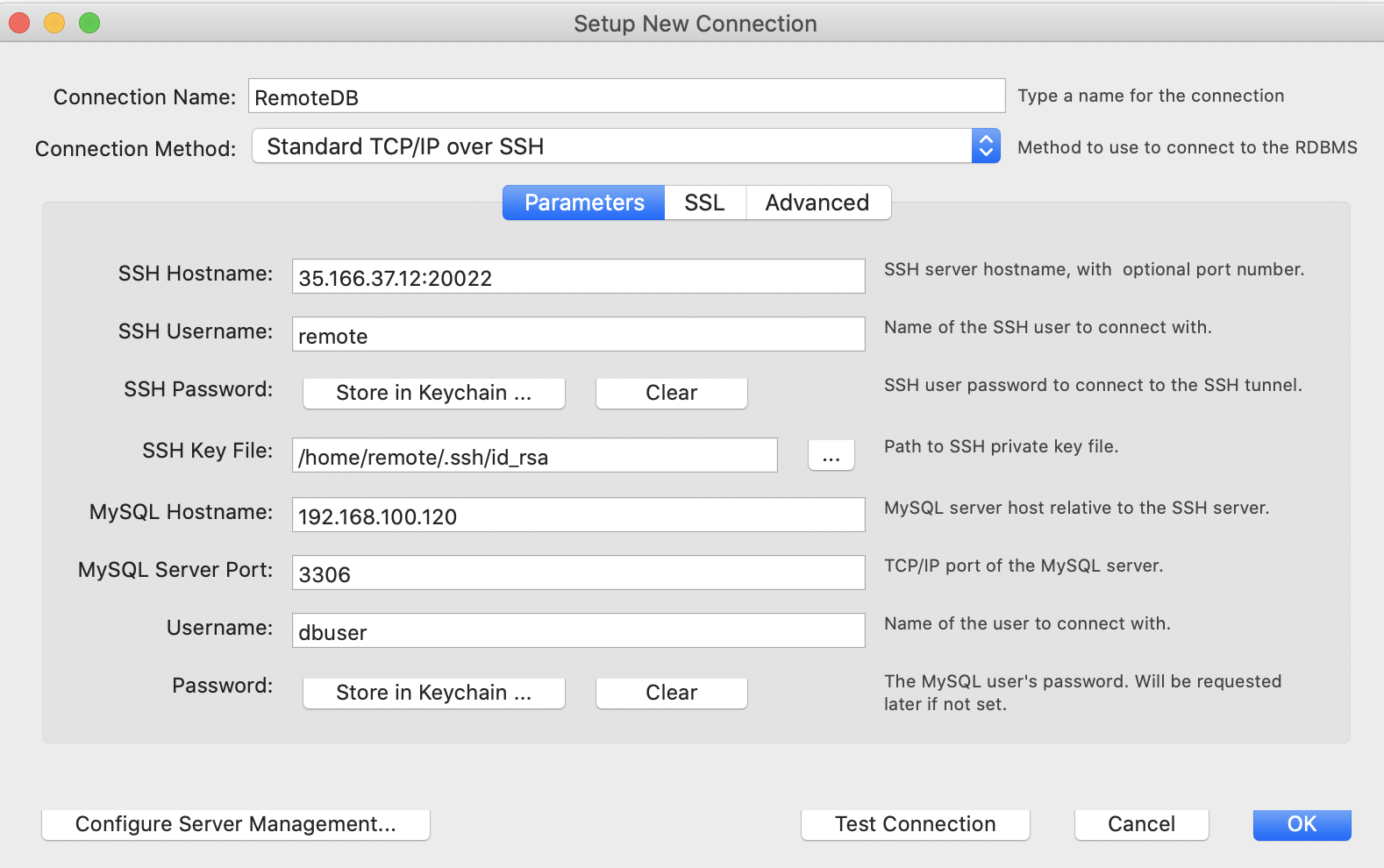 And the same for PgAdmin: 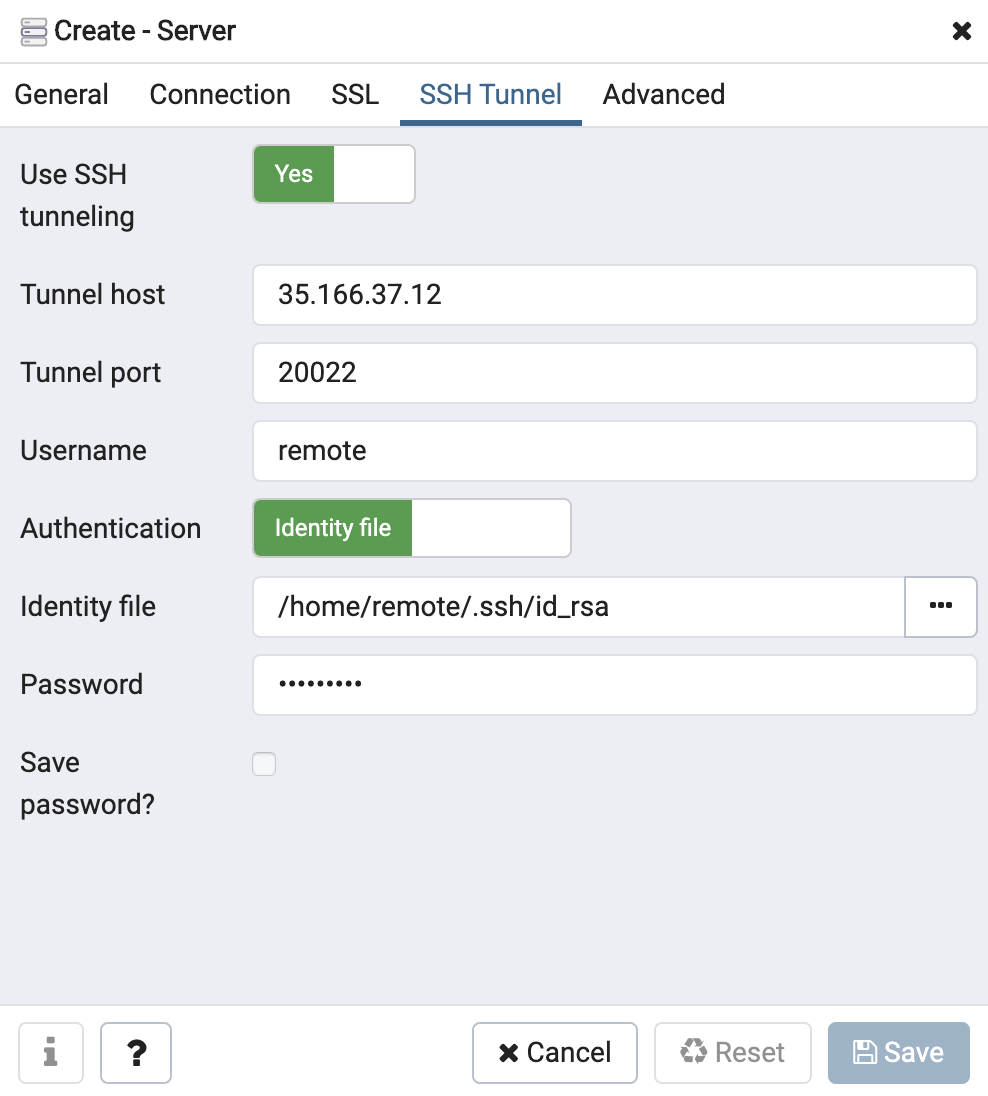 As you can see, the information asked here is pretty similar to the used for the command line SSH Tunneling connection.

Security is important for all companies, so if you are working from home, you must keep data as secure as you are while working in the office. As we mentioned, for this, probably the best solution is having a VPN connection to access the databases, but if for some reason it is not possible, you need to have an alternative to avoid handling data over the internet in an insecure way. As you could see, configuring SSH Tunneling for accessing your databases is not rocket science, and is probably the best alternative in this case.