Microsoft SQL Server is an excellent choice for a relational database with key benefits including performance, security, reliability, and total cost of ownership. A few exciting features of SQL Server are outlined below:

When we think about SQL Server, we always think about it as running on Windows. Starting from SQL Server 2017, you can run it on Linux as well.

Microsoft executive vice president Scott Guthrie states: “Bringing SQL Server to Linux is another way we are making our products and new innovations more accessible to a broader set of users and meeting them where they are”.

SQL Server on Linux is an enterprise-ready relational database with industry-leading capabilities and robust business continuity. It combines the Microsoft SQL Server on a best-known and most-used open-source operating system Linux.

The following image gives a high-level process model overview of the platform abstraction layer and its communication with Linux OS: 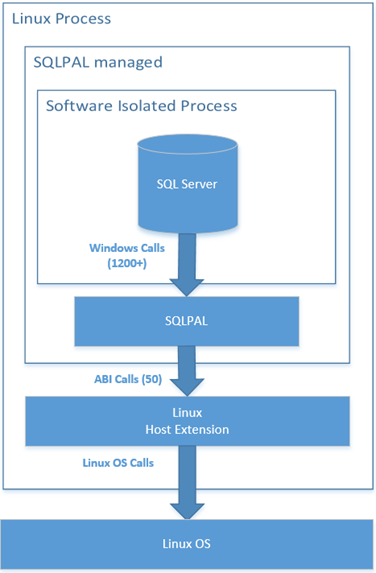 Why Should You Run SQL Server on Linux?

You might be curious to learn more about SQL Server on Linux and wonder whether you can use it for critical databases. Therefore, let me tell you a few reasons you should:

Features of SQL Server on Linux

Security is a critical feature for a relational database. Therefore, SQL Server on Linux contains advanced security features in all editions, including the standard edition:

SQL Server on Linux supports PolyBase, where you can configure external tables with Oracle, Big Data, SAP HANA, Hadoop, NoSQL Databases as a data virtualization tool. It eliminates the ETL transformation where you need to import or export data into SQL Server before querying it.

SSIS packages can connect with the SQL Server on Linux databases or SQL Server in a container similar to the Windows-based SQL Server instance.

This article provided you with some high-level introduction to SQL Server on Linux, we went through its features. It lists why organizations should consider using SQL Server as their database solution on Linux operating systems and containers.

In subsequent articles, we will explore more useful SQL Server features on Linux and explore them practically.