MySQL replication can have various topologies and the most well known topology is the Master/Slave topology, where one host is the master and the slave replicates all transactions from the master. Lesser known are Multi-Master and Multi-Source replication. Even though they sound similar they are actually quite different. This blog post will illustrate their differences.

Multi Master is similar to the Master/Slave topology, with the difference that both nodes are both master and replica at the same time. This means there will be circular replication between the nodes. It is advisable to configure both servers to log the transactions from the replication thread (log-slave-updates), but ignore its own already replicated transactions (set replicate-same-server-id to 0) to prevent infinite loops in the replication. This needs to be configured even with GTID enabled.

Multi master topologies can be configured to have either a so called active/passive setup, where only one node is writable and the other node is a hot standby. Then there is the active/active setup, where both nodes are writable.

Multi source replication is supported as of MariaDB 10.0 and MySQL 5.7 . Basically this means that  a replica is allowed to replicate from multiple masters. To enable this, the replica should not have multiple masters writing to the same schema as this would lead to conflicts in the write set. 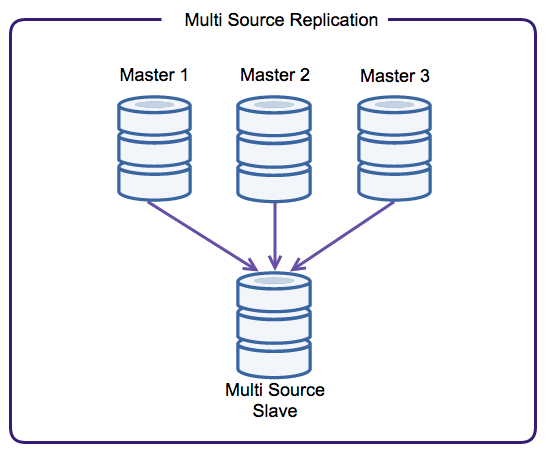 Why would you need multi source replication? Multi source replication may be suitable for data warehousing needs, delayed slaves or data locality in some cases. Especially if multiple database clusters are not utilizing their full write capacity, it may save a few hosts by consolidating multiple slaves into one node.

This blog post is a condensed version of the replication topology chapter in our MySQL Replication Blueprint whitepaper. Download the whitepaper and learn more about MySQL replication end-to-end.