One of the greatest factors and fundamentals of data governance is security. It is a good practice to have database security implemented in place whenever you have your data management involved for enterprise or mass consumption.

Data security is one of the most significant aspects of administering a database. It plays a critical role for which every database management should implement. When it’s implemented and done correctly, the result shall improve not only your data security but also affects system stability, enhances the development life-cycle, boosts your data compliance, and enhances security awareness down to your team level. Everyone does not want their data to end up in the wrong hands. If data is breached, it not only risks the confidentiality and integrity of your data but also leaves your organization open to significant financial risks. Even for just a simple database management implementation, if you find out someone has already intruded your system, the feeling of being insecure and scared as to what consequences shall bring you is totally discomforting.

Determining if your MySQL server connection is safe depends on how securely MySQL transmits data-in-transit. With an unencrypted connection between the MySQL client and the server, someone with access to the network could watch all your traffic and inspect the data being sent or received between client and server.

When you must move information over a network in a secure fashion, an unencrypted connection is unacceptable. To make any kind of data unreadable, use encryption. Encryption algorithms must include security elements to resist many kinds of known attacks such as changing the order of encrypted messages or replaying data twice.

But my MySQL is safe, right?

Believing that your MySQL is safe without determining its stability and vulnerability checks is like a religion. You tend to believe even without seeing it, even without touching it. The problem is, MySQL is a technology and its existence is not based on abstract thoughts. It has to be tested, it has to be proven, and it requires safety and follows best practices that have been tested as well by others.

MySQL supports encrypted connections between clients and the server using the TLS (Transport Layer Security) protocol. TLS is sometimes referred to as SSL (Secure Sockets Layer) but MySQL does not actually use the SSL protocol for encrypted connections because its encryption is weak and SSL has been already deprecated in favor of TLS. TLS uses encryption algorithms to ensure that data received over a public network can be trusted. It has mechanisms to detect data change, loss, or replay. TLS also incorporates algorithms that provide identity verification using the X.509 standard. SSL or TLS is being used interchangeably but for the context of encryption with MySQL, TLS is being used for which MySQL supports encrypted connections using the TLSv1, TLSv1.1, TLSv1.2, and TLSv1.3 protocols.

Scytale is known to be used as a way to encrypt and decrypt a message which was used around 400 B.C. by the Spartans. They would write a message on a sheet of papyrus (a type of paper) that was wrapped around a staff. The recipient can only decipher the message if the correct diameter and size of the staff. It serves as a way to encrypt and avoid unauthorized extraction of messages or data to the target destination.

Just like with MySQL, using SSL/TLS protocols and ciphers is a way to avoid someone extracting your data or hijacking your data as it passes the wire or over the internet.

By default, MySQL programs attempt to connect using encryption if the server supports encrypted connections, falling back to an unencrypted connection if an encrypted connection cannot be established. Since version MySQL >= 5.7, TLS/SSL and RSA files can be created or generated with the support of variables. For MySQL distributions compiled using OpenSSL, the MySQL server has the capability of automatically generating missing SSL and RSA files at startup. The auto_generate_certs, sha256_password_auto_generate_rsa_keys, and caching_sha2_password_auto_generate_rsa_keys (version >= 8.0), system variables control automatic generation of these files. These variables are enabled by default. They can be enabled at startup and inspected but not set at runtime.

By default, these variables are set to ON or enabled. Otherwise, users can invoke the mysql_ssl_rsa_setup utility manually.  For some distribution types, such as RPM and DEB packages, mysql_ssl_rsa_setup invocation occurs during data directory initialization. In this case, the MySQL distribution need not have been compiled using OpenSSL as long as the openssl command is available.

Once these files are available and/or generated, MySQL will still not use encryption connections for the following reasons. As mentioned earlier, by default, MySQL client programs attempt to establish an encrypted connection if the server supports encrypted connections, with further control available through the –ssl-mode (or –ssl <= 5.7.11 as this is already deprecated) option:

With the default mechanism of MySQL to use a preferred connection, likely it tries to attempt to use the encrypted or secured connection but this still leaves some things to do and to determine.

Then verify if the variables are set correctly which should be enabled as they are by default:

Verifying if the files are generated accordingly in path /var/lib/mysql/ (or the path of datadir for this MySQL):

Then verify if SSL files are loaded correctly:

Now, this looks good. It does also mean that MySQL is ready to accept encrypted connections. But connecting to MySQL as is, as stated it shall use –ssl-mode=PREFFERED by default, or if –ssl-mode is not specified, it will still failback to use an unencrypted connection. See below:

This reveals that it’s not using a secured connection. Checking the SSL session status variables if any ciphers are used reveals empty:

Since it reveals that the connection is still not secured, MySQL introduces the require_secure_transport variable which requires that all connections to be made should be encrypted and secured. Any attempts to connect for an unsecured connection fail. For example, enabling it on the server:

Trying to connect as a client using an unencrypted connection will fail:

To connect successfully and securely, you need to specify the ssl-ca, ssl-cert, ssl-key variables. See below:

Making sure MySQL server deployments are encrypted and safe

Hassle-free is what we always look forward to so that there are no other problems and concerns to worry about. ClusterControl deploys MySQL databases using encrypted connections and generates the SSL and RSA certificates for you. For example, a screenshot below showing you the job activity of a Create Cluster command from ClusterControl. 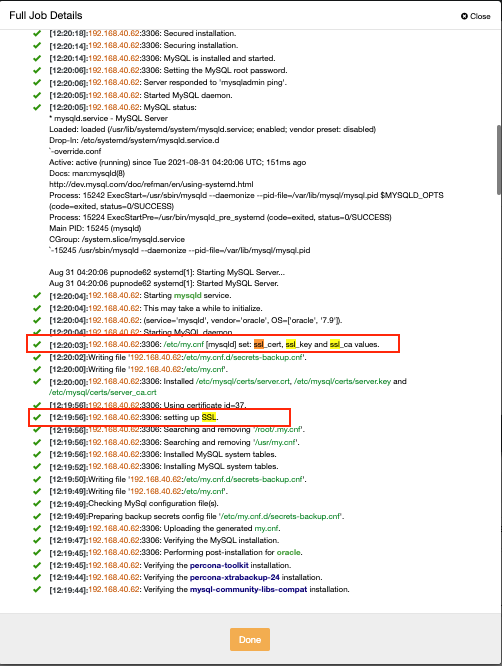 It sets up the SSL and RSA files and places them in /etc/mysql/certs/ path just like below:

Then ClusterControl also groups the generated SSL and RSA files in a centralized fashion under the Key Management navigation panel as shown below: 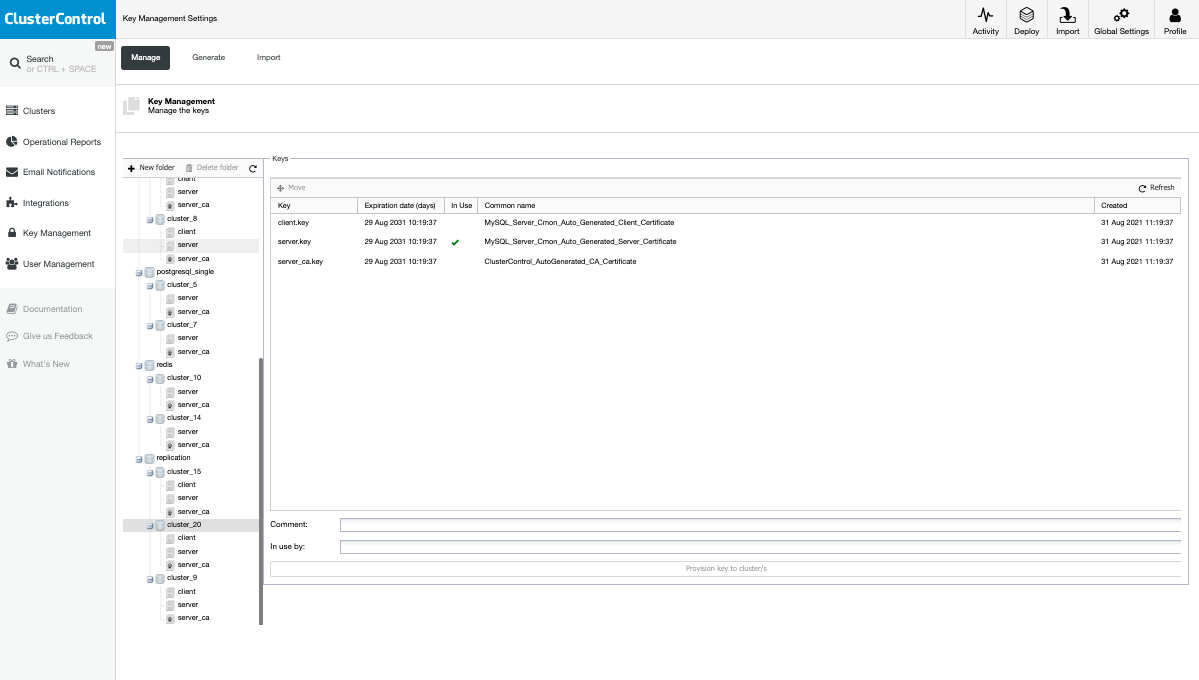 Once deployed, all you have to do is either create users with REQUIRED SSL or have require_secure_transport if you want to enforce an encrypted and secured layer for your MySQL server connections.